"I was endeavoring to make some portable meat glue (the common kind known) for some friends who were going to California—I had set up a large kettle and evaporating pan, and after two days labor I reduced one hundred and twenty pounds of veal to ten pounds of extract, a consistency like melted glue and molasses; the weather was warm and rainy, it being the middle of July. I could not dry it either in or out of the house and unwilling to lose my labor, it occured to me, after various expedients, to mix the article with good flour and bake it. To my great satisfaction, the bread was found to contain all the primary principles of meat, and with a better flavor than simple veal soup, thickened with flour in the ordinary method.
The nutritive portions of beef or other meat, immediately on its being slaughtered, are, by long boiling, separated from the bones and fibrous and cartilaginous matters: the water holding the nutritious matters in solution, is evaporated to a considerable degree of spissitude—this is then made into a dough with firm wheaten flour, the dough rolled and cut into a form of biscuits, is then desiccated, or baked in an oven at a moderate heat. The cooking, both of the flour and the animal food is thus complete. The meat biscuits were prepared to have the appearance and firmness of the nicest crackers or navy bread, being as dry, and breaking or pulverizing as readily as the most carefully made table crackers. It is preserved in the form of biscuit or reduced to coarse flour or meal. It is best kept in tin cases hermetically soldered up; the exclusion of air is not important, humidity alone is to be guarded against.
For making soup from a meat biscuit, a batter is first made of the pulverized biscuit and cold water—this is stirred into boiling water—the boiling is continued some ten or twenty minutes—salt, pepper, and other condiments are added to suit the taste, and the soup is ready for the table.
I have eaten the soup several times,—it has the fresh, lively, clean, and thoroughly done or cooked flavor that used to form the charm of the soups of the Rocher de Cancale. It is perfectly free from that vapid unctuous stale taste that characterizes all prepared soups I have heretofore tried at sea and elsewhere. Those chemical changes in food which, in common language, we denominate cooking, have been perfectly affected in Mr. Borden’s biscuit by the long-continued boiling at first, and the subsequent baking or roasting. The soup prepared of it is thus ready to be absorbed into the system without loss, and without tedious digestion in the alimentary canal, and is in the highest degree nutritious and invigorating."

The recipe for these biscuits is at the end of the article.
Sailing back from London's World Fair, Borden was horrified seeing several children and two cows die from drinking contaminated milk; the milk wasn't fresh... but had not soured yet. He wondered if there was a way to preserve milk indefinitely and found inspiration from the Shakers with whom he had spent some time, possibly in Kentucky. He recalled that the Shakers had developed a process of evaporating fruit juice by vacuum and making it "shelf-stable," in today's terms. Borden used a similar process and invented condensed milk. In short order, he founded the New York Condensed Milk Company.

NOTE: Al Capone and his Brother Ralph are responsible for milk expiration dating. The Capone's convinced the Chicago City Council to pass a law in 1933 that clearly stamped the date on milk bottles where the consumer could read and understand it.

Borden opened factories across New York State, including Craryville, Copake, and Ancram.
Borden was enshrined in the "Inventors Hall of Fame" in 2008 for inventing condensed milk, U.S. Patent No. 15,553, on August 19, 1856.
By 1858, Eagle Brand Condensed Milk was a trusted brand and selling briskly. The Union Army supplied the troops with Eagle Brand during the Civil War, an enormous windfall for Borden.
In later years, Borden returned to Texas, where he supported the poorly-paid, minorities, and teachers. He became a well-known philanthropist, and he helped organize a school for negroes. Borden also helped build six new churches. He died in Borden, Texas, in 1874, and was buried in Woodlawn Cemetery in New York.
Borden’s was once the largest U.S. producer of dairy and pasta products. He also sold snacks, processed cheese, jams, jellies, and ice cream. Borden’s consumer products division sold wallpaper, adhesives, plastics, and resins. The company sold Elmer’s Glue and Krazy Glue. The Borden Brand eventually became the Eagle Brand and sold such labels as Mott’s and Cremora. Smucker’s acquired Eagle Brands in 2007.
Gail Borden invented a lot of useful products. Throughout his life, he always respected science. He was a very reputable man.
The New York Condensed Milk Company lived on, and in 1899, the company renamed itself Borden Milk Company in his honor.
Elsie the Cow 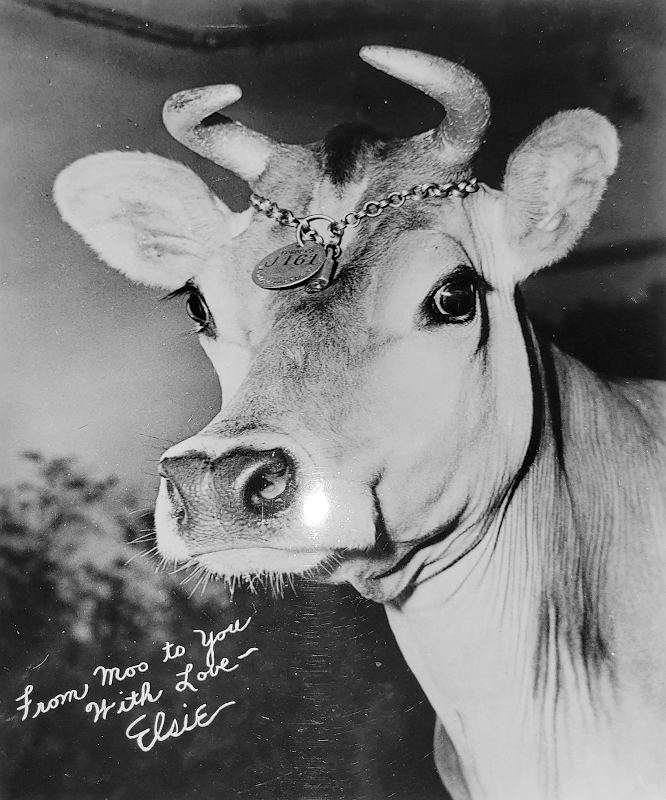 Elsie, the Cow, was the first Mascot of Borden Dairy Company, appearing in 1936 to symbolize the "perfect dairy product." Since the demise of Borden in the mid-1990s, the character has continued to be used in the same capacity for the company's partial successors, Eagle Family Foods (owned by J.M. Smucker) and Borden Dairy.
Elsie's real name was "You'll Do Lobelia." At seven years old, she was beautiful, photogenic, good-natured (and a bit of a ham); she was christened Elsie and became a star. Long before there was Adele, Beyoncé, Brandy, Britney, Cher, Elvis, Fergie, Halsey, Kesha, Kylie, Madonna, Pink, Prince, Rihanna, Selena, Shakira, Shakira, Tiffany, and Usher ♫♪♪♫, there was Elsie.
The first Elsie was a registered Jersey heifer selected while participating in Borden's 1939 New York World's Fair "Rotolactor" exhibit (a cow 'merry-go-round' that could milk cows much faster and more efficiently).

When the other cows were not being milked, Elsie would ride the Rotolactor alone wearing her trademark chain of daisies around her neck and a blanket with her name on her back—waving her tail to the crowd.
Elsie was a smash, and the Borden display was a big success. Elsie gave a "Bovine Ball" for the press at the end of the season, and this proved so popular that other appearances followed.
At the height of her career, Elsie was noted as the most famous icon in America, not an easy feat when you are up against such formidable competitors like The Campbell Soup Kids, the Marlboro Man, and The Jolly Green Giant.
According to Ad Age magazine, Elsie became one of the top 10 advertising symbols of the twentieth century.
Borden’s "None Such Mince Meat" (1940-41) 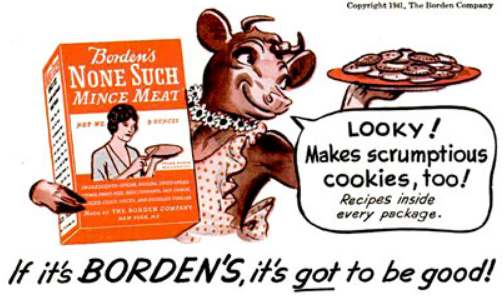 Here's HEMO—made for every man, woman, and child who needs more vitamins and minerals to get a new kick out of life!

Hemo has a deep, rich, malty flavor. Tastes like the slickest malted milk you ever drank—only better!

But HEMO is more—far more—than just a grand-tasting drink! HEMO is crammed with vitamins and minerals—enough to really do some good! One glass of Hemo daily—yes, just one—gives you one-half the total daily adult requirements of Vitamins A, B1, D, and G, plus iron! And extra needed calcium and phosphorus, too! 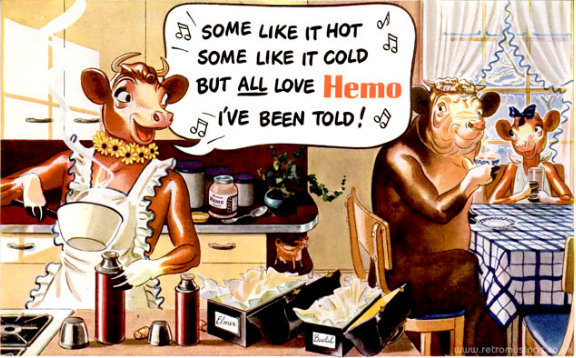 Added to a usual diet, that makes up almost any shortage of all these vital food elements! Enough HEMO to make one drink costs only 2½¢!
Start drinking HEMO today. Lean back and enjoy every sip. See if you don't start feeling better, looking better, and tackling each day with more pep! Get HEMO now! 24 delicious drinks at your grocer or druggists for 59¢.

Elsie had a fictional cartoon mate, Elmer the Bull, whose drawing is on the label of every bottle of Elmer's Glue-All. Elmer was created in 1940 and lent to Borden's then chemical division as the mascot for Elmer's Products.

The pair were given offspring Beulah and Beauregard in 1948 and twins Larabee and Lobelia in 1957.
Elsie has been bestowed honorary university degrees as "Doctor of Bovinity," "Doctor of Human Kindness," and "Doctor of Ecownomics." In Wisconsin, home of the Dairy Princess, Elsie was named "Queen of Dairyland." (The Wisconsin "Queen of Dairyland" provided the dairy industry with hundreds of thousands of dollars worth of free publicity.) The Seneca (Iroquois) Tribe named Elsie (Iroquois: awsғ:iyo jó:sgwa:ön = Beautiful Flowers Cow) an honorary Chief. She holds keys to over 200 cities.

But best of all, Elsie helped sell more than $10 million in U.S. War Bonds. 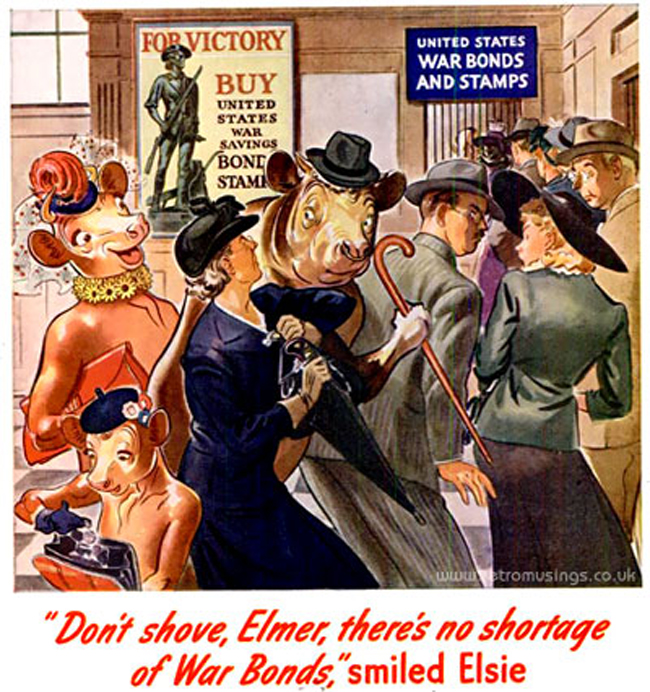 Tragically, on April 16, 1941, Elsie was traveling on a highway when her truck was slammed from behind, severely damaging her vertebrae. She was rushed back to Plainsboro, New Jersey, to a veterinarian. Various treatments were considered, including traction, but there was nothing to be done in the end. Elsie was euthanized on April 20 and buried at the Walker-Gordon Dairy behind the carpenter shop. A headstone was later created to mark her resting place.
Elsie the Cow TV Commercial, Circa 1950.
In 1997 Elsie and the Borden name were sold to the Dairy Farmer's Association of America. Her "i-cow-nic" image is still in use on various cheese products. People still love Elsie. She is definitely the Queen among cows, and that's no bull.

To make into soup, smash it up in cold water with something heavy, like a meat tenderizer, then boil in more water.

It was okay! The broth was pretty weak in the end, but more biscuits would have helped that. I thought the flour would have thickened the soup, but instead, it made little crumbly sediment, which was expected. I can see how this would be a useful addition to a wagon headed west. These meat biscuits never became popular, but more than one wagon included a barrel of them amongst their supplies. (Anonymous)