The History of the Screw Club in Lake View, Chicago, and the Honorable William Boldenweck.

The Screw Club was a republican political machine that was brought into existence to elect William Boldenweck Mayor of the City of Lake View. Boldenweck was the last Supervisor of Cook County's Lake View Township (1857-1887) and was then elected as the first and only Mayor of the City of Lake View from 1887 to 1889. The Lake View Screw Club had initiated the movement against Chicago annexation, which happened on June 29, 1889.

Boldenweck was born in Gottingen, Germany on August 9, 1852. The family moved to Chicago in 1854. During that year both, his father and mother died of cholera [1], a disease then raging throughout America. William attended school at a building, located at that time on Madison Street, between State and Dearborn Streets.
William Boldenweck attended the Dyrenfurth Commercial College, Chicago's first business school founded in 1857 by Julius Dyrenfurth. Dyrenfurth Commercial College was Chicago's first business school. Julius was known as the "Father of Music in Chicago." He was a violinist and the Director of Chicago's first orchestra, the Philharmonic Society in 1850. (Surname is also spelled Dyhrenfurth and Dyrenforth.)

NOTE: Harold (Son of Julius) and Emily (Mendroth) Dyrenfurth had three children, a son, and daughters, but the son died of diphtheria in childhood, and the two girls, 14-year-old Ruth and 19-year-old Helen lost their lives in the Iroquois Theatre Fire on December 30,1903. Ruth and Helen were accompanied to the theatre by the family's Swedish nanny, 24-year-old Alma Josephina Erland. The evening of the Iroquois fire Ruth and Helen's cousin, 31-year-old Arthur Dyrenfurth, found Ruth's body at Rolston's funeral home and took her to her parent's home.  A police officer, Albert F. Sinsrott, found Helen's body on a stairwell outside the auditorium, the second of only two victim identifications known to have been made at the theater. Ruth and Helen are buried in a family plot at Rosehill Cemetery in Chicago.

After graduating from Dyrenfurth Commercial College, Boldenweck worked at different trades until 1871 when he joined his brother in the cut-stone and contracting business as a bookkeeper. In 1875, Mr. Boldenweck purchased the business from his brother and associated himself with Mr. P. Heine, under the firm name of Boldenweck & Henne, and ran the contracting business with him until 1883, when Boldenweck partnered with Mr. Ernest Haldeman forming the firm of Boldenweck & Heldmaier.
Boldenweck resided in Cook County's Lake View Township since July 1876. He was a member of the Lake Shore Club, Knights of Honor, Lake View Singing Society, and the Screw Club. He married Miss Adelheid G. Samme on March 25, 1873, daughter of Frederick Samme who settled in Chicago in 1847. 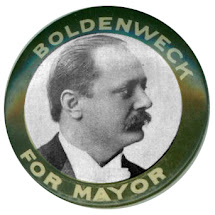 Boldenweck retired in 1887. He ran for and was elected to the office of Supervisor of Lake View, then under a village organization. He was next elected the first Mayor of the city of Lake View on the Republican ticket. Boldenweck was re-elected Mayor until that suburb was annexed by the city of Chicago in 1889.
The last mention in the Chicago Tribune of the Screw Club was on February 3, 1889, ordering new uniforms to attend the inauguration of President-elect Benjamin Harrison.
In 1891, Mr. Boldenweck was appointed a member of the Board of Education by Mayor Hempstead Washburne (1891-1893), for a term of four years.
In 1900, the Sanitary District of Chicago, then headed by William Boldenweck, completely reversed the flow of the main stem and South Branch of the Chicago River using a series of canal locks, increasing the river's flow from Lake Michigan and causing it to empty into the newly completed Chicago Sanitary and Ship Canal.

I am William Boldenweck's Great-grandniece. In my possession are a number of William's personal papers, including correspondence to my great-grandmother, the wife of his nephew. He provided for my widowed great-grandmother and her daughter in his will.
I also have a photograph of him with his siblings one month after they were orphaned by the cholera epidemic of 1854.
One month after they arrived in the U.S., William's parents died within a week of each other when he was not yet three years old, their bodies deposited in a mass grave in what is now Lincoln Park near what is now the Chicago History Museum (Chicago Historical Society), and many of his personal artifacts are in their possession.

One item of interest is the shovel William used to break ground to reverse the Chicago River, which [Christa Selig] believes killed both of his parents, all three of his children, and two of his sisters in 1889, the same year that Lake View was annexed by the city of Chicago.
I deeply appreciate this respectful and, to my knowledge, accurate post, as I appreciate history, too. William Boldenweck was a very real person and is very real to me.

[1] Cholera was a disease of conquest in Chicago, making its first known appearance in 1832 with Winfield Scott’s troops who had been sent to subdue Black Hawk and his allies. This swift-moving disease could kill within hours of contraction. Victims felt sudden cramps, followed by vomiting, diarrhea, and often death due to dehydration.
While cholera was present in Chicago across its history, it was particularly virulent every summer between 1848 and 1855. By then, Chicagoans purchased their water from private vendors who delivered casks of Lake Michigan water or drew water directly from area waterways. While it was clear that cholera was highly contagious and traveled easily with humans, it was not until 1849 that a London physician made a direct connection between a contaminated water source and the disease. In response, Chicagoans organized the Chicago City Hydraulic Company in 1851 to provide a safe drinking supply. With ongoing improvements to water provisions, cholera’s threat lessened but did not disappear. One reason was that as Chicago established a ready reliable water supply system, wastewater overwhelmed the region. Not until the 1880s, when residents were required to connect to an expanding sewerage system, did cholera firmly recede. But cholera was under control in Chicago before the disease-causing bacteria were identified in 1883 and before the development of antibiotics that could cure it. Prevention saved the day.
Presented by Dr. Neil Gale, Ph.D. at 10/11/2021 12:03:00 PM