The Amazing History of The Toy Tinkers Company, the Makers of Tinkertoys, in Evanston, Illinois.

Tinkertoys were one of many building/construction-type toys invented in the early 1900s.
The Meccano-Erector set was developed by Frank Hornby of Liverpool, United Kingdom, in 1898. (National Toy Hall of Fame 1998)
Tinkertoys' first product design was released in 1914 by Charles H. Pajeau, a stonemason. He got the idea for the toy, presented the idea to Robert Pettit, a trader with the Chicago Board of Trade, on a commuter train in Chicago, and started the Toy Tinker Company in Evanston, Illinois, to manufacture them. The toys were developed to help children develop fine motor skills, improve math skills, boost creativity and imagination, and enhance problem-solving skills through play. (National Toy Hall of Fame 1998)
And Lincoln Logs, which was invented in Chicago in 1916 by John Lloyd Wright, the son of architect Frank Lloyd Wright. (National Toy Hall of Fame 1999)
The manufacturing location for The Toy Tinkers, Inc., was a 65,000 square-foot four-story plant at 2012 Ridge Avenue in Evanston, Illinois.

Pajeau and Pettit had presented the toys at the 1914 American Toy Fair in New York City, but no one was interested. On the way back to the hotel, Pajeau convinced a few toys stores to let him set up elaborate displays for a hefty commission, but the toy sets were slow to take off.
The business partners then decided to try a new marketing tactic when they returned home to Chicago. Around Christmas time, they set up displays in a select few Chicago area toy stores. This time they hired midgets, whom they dressed as elves, to sit in the store windows and play with the toys. This publicity stunt made all the difference. Within a year, Tinker Toys had produced over a million sets.
The cornerstone of the Tinkertoy set is a wooden spool roughly two inches in diameter, with holes drilled every 45° around the perimeter and one through the center. Unlike the center, the perimeter holes do not go all the way through. With the differing-length sticks, the set was intended to be based on the Pythagorean progressive right triangle. [ The "Pythagoras' Theorem" and can be written in one short equation: a² + b² = c² ]

The sets were introduced to the public through displays in and around Chicago, which included the popular model Ferris wheels.
One of Tinkertoy's distinctive features is the toy's packaging. The original toys were made from wood that was left in its natural state. In 1919, the company added an electric motor to the set. 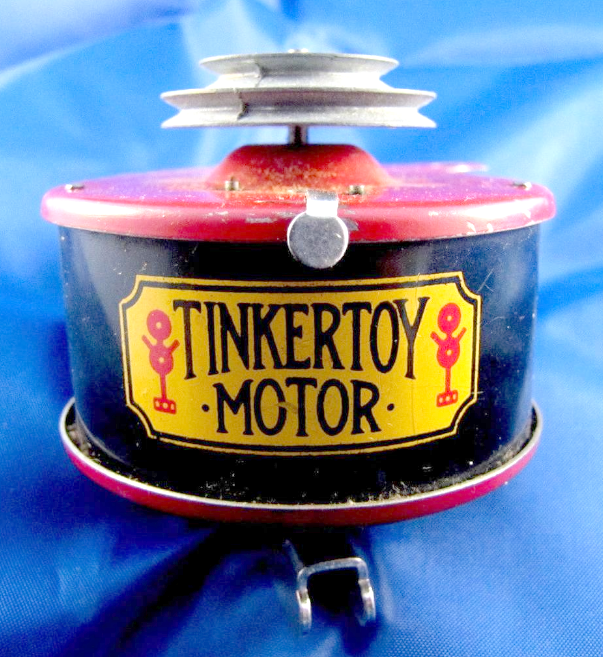 In the early 1920s, Toy Tinkers started branching out into other toy designs, including pull toys. 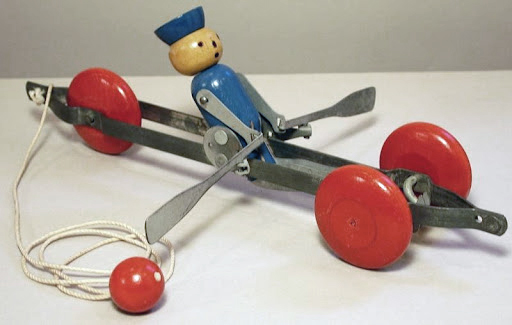 To assist buyers in differentiating between the various offerings, sets were placed in different size mailing tubes labeled with a number (e.g., 116, 136) and a name (e.g., major, prep, big boy, junior, grad).

In the 1950s, color was added, and the wooden sticks appeared in red, green, blue, and peach. 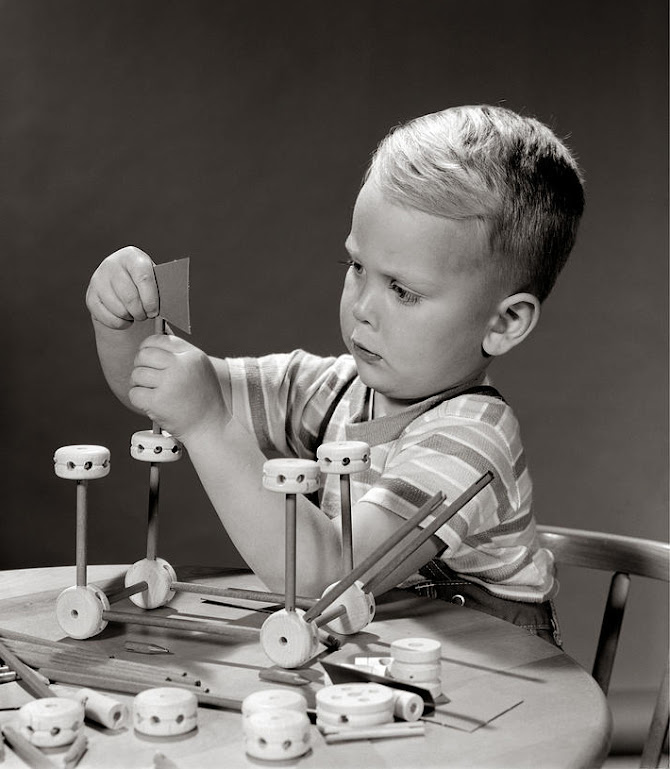 Tinkertoys have been used to construct complex machines, including W. Daniel "Danny" Hillis's Tic-Tac-Toe playing computer from 1978. It is on display at the Computer History Museum in Mountain View, California.

A Tinkertoy Computer That Plays Tic-Tac-Toe.
HOW IT WORKS. (8 pgs - PDF)
Questor Educational Products Co. bought out Spalding in 1969, and move all operations out of Evanston by 1973. In 1985, Playskool acquired the Tinkertoy line (Tinkertoy Plastic and Tinkertoy Classic 'wood' sets and parts). Currently, Odds On Toys, a division of Hasbro, is distributing Tinkertoys. The US rights are owned by Basic Fun!.
Compiled by Dr. Neil Gale, Ph.D.
Presented by Dr. Neil Gale, Ph.D. at 2:19 PM