A Replica Lincoln Statue is Removed in Boston, Massachusetts. The Original Statue Remains in Washington D.C.

A replica of a controversial statue of Abraham Lincoln standing over a newly emancipated Black man—the figure modeled on Archer Alexander, the last man recaptured under the Fugitive Slave Act—has been removed from Park Square in Boston, Massachusetts. The original statue in Washington's Capitol Hill neighborhood at Lincoln Park was also criticized over the summer during demonstrations following the police killing of George Floyd on May 25, 2020. 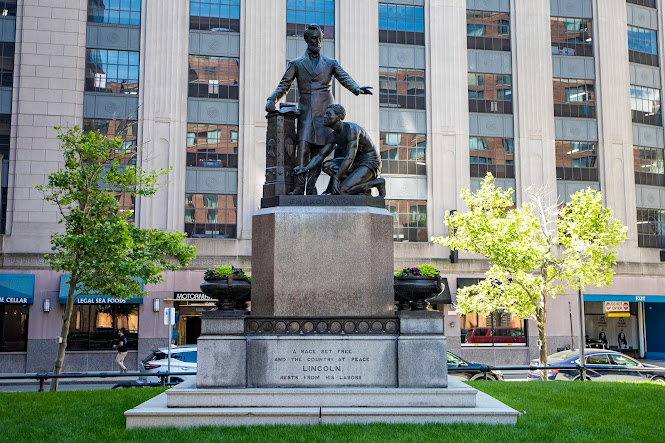 Officials placed the statue under police guard and surrounded it with protective barriers after a group of demonstrators tore down a statue of former Confederate Albert Pike a few blocks away and threatened to do the same with the Lincoln statue.
The statue by Thomas Ball depicts a shirtless Black man, on his knees, in front of a clothed and standing Abraham Lincoln. Ball called his artwork "Emancipation Group." On the one hand, Lincoln holds a copy of the Emancipation Proclamation, while the other arm is stretched over the Black man. Ball intended it to look like the man was rising to freedom, but to many, it seems like he is bowing down or supplicating to Abraham Lincoln.
Archer Alexander, who modeled for Ball, was not initially freed by Lincoln but by his actions. He escaped his bondage in the middle of the night in 1861 and repeatedly evaded capture by his former enslavers.

Boston Museum founder Moses Kimball donated the bronze recasting of the original Ball statue in Washington, D.C., to Boston in 1879. The replica will be temporarily stored while the city figures out "a new publicly accessible location (i.e., a museum) where it could be better explained."

The Emancipation Memorial statue was commissioned and paid for by a group of Black Americans, many formerly enslaved. But the group did not have a say in the statue's design; that distinction went to an all-White committee and the artist, Ball, who was White.
The original statue was dedicated on April 14, 1876, the 11th anniversary of Lincoln's assassination, before a crowd of 25,000 that included then-President Ulysses S. Grant. Abolitionist Frederick Douglass spoke at the unveiling, noting that the "Great Emancipator," Lincoln was reluctant to free enslaved people. When he did so, it applied only to enslaved people in Confederate states, and enslaved people in most Union states were not freed until December 1865.
Days after the unveiling, Douglass was the first to criticize the monument and suggest an additional memorial be placed in the same park to better represent negroes, in a letter to the editor of the National Republican Newspaper.

Sir,
Admirable as is the monument by Mr. Ball in Lincoln Park, it does not, as it seems to me, tell the whole truth, and perhaps no one monument could be made to tell the entire truth of any subject which it might be designed to illustrate. The act of breaking the negro's chains was the act of Abraham Lincoln and is beautifully expressed in this monument.
But the act by which the negro was made a citizen of the United States and invested with the elective franchise was pre-eminently the act of President Ulysses S. Grant, and this is nowhere seen in the Lincoln monument. The negro here, though rising, is still on his knees and nude. What I want to know before I die is a monument representing the negro, not the couchant (body resting on the legs/knees and the head raised) on his knees like a four-footed animal, but erect on his feet like a man. There is room in Lincoln Park for another monument, and I throw out this suggestion so that it may be taken up and acted upon.
Frederick Douglass