It is so rare to change any inaccurate historical account. Still, through my research and perseverance, the Pabst Mansion website changed its claim about what Pabst Brewing Company actually won at the 1893 World's Fair. History has been accurately restored.
THE FALSE STATEMENT:
Pabst Brewing Company of Milwaukee, Wisconsin, claimed, on their websites, to have won their Blue Ribbon, then claimed they won a gold medal at the 1893 Chicago's World Columbian Exposition, and that's how their "Best Select" beer (named for the founder of the brewery, Jacob Best) got its name changed to "Pabst Blue Ribbon" after the World's Fair was over.

THE TRUTH:
Pabst Brewing Company won ribbons and awards at many other previous beer competitions at home and abroad but not at the 1893 World's Columbian Exposition.

Starting in 1882, Pabst had blue silk ribbons tied around the neck of each bottle as a marketing ploy to make "Best Select" beer bottles stand out in Taverns, Saloons, and Pubs. Considering all the awards that Best Select beer won up to that point, they never won a literal "Blue Ribbon." According to the company, the first Blue Ribbon came from the 1893 World's Fair. 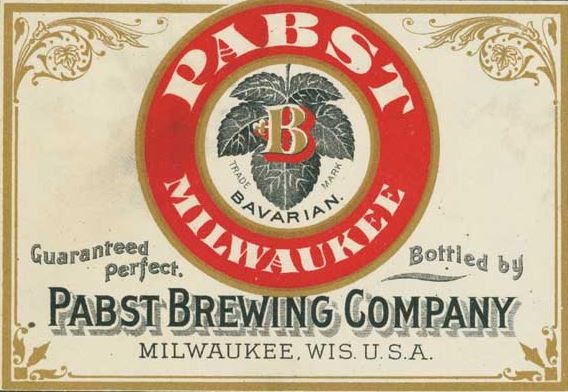 FACTS ABOUT JUDGING AT THE 1893 WORLD'S FAIR:
The World's Fair organizers judged all contests a little differently than had been judged in previous world fairs. Instead of competing directly against exhibitors in the same categories, each contest was evaluated against a list of criteria representing a standard of excellence for that category.

Regarding the beer brewers, judges were instructed to score each brew on purity, color, and flavor. Then assign a score between 0 and 100 within each category. All beers that scored an 80% or higher would be awarded a Bronze St. Gaudens Medal (no gold or silver medals were awarded) and a parchment certificate of excellence. 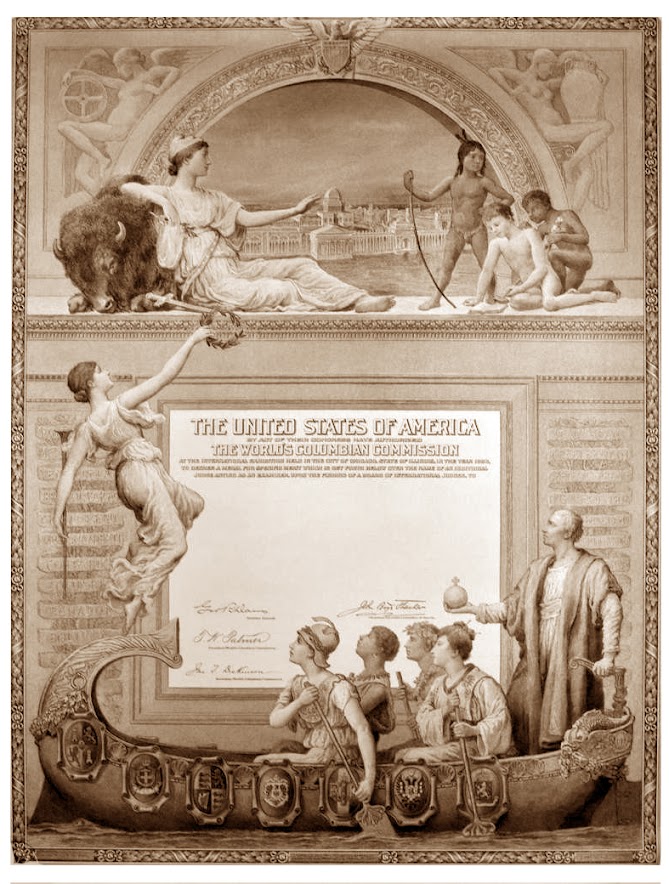 Things didn't exactly work out that way once the Exposition opened. The beer judges decided to develop their own scoring system with ranked prizes awarded based on numerical scores in categories of their own creation.
The brewers were left to assume that whoever ended the Fair with the highest score "won," never mind that there was no grand prize and that each medal was bronze and looked exactly the same as all the other medals.
But during the contest, the beer judges went rogue and decided to develop their own scoring system based on made-up categories. The brewers assumed that getting the highest score meant "winning" even though no grand prize existed.

Captain Frederick Pabst quickly announced himself as the "grand prize winner," even though their medal and certificate were the same as those won by other brewers who had scored 80% or higher. As the story is told, Pabst celebrated by having the entire brewery in Milwaukee draped in a blue ribbon and gave all his workers a paid day off. The attention and sales inspired the company to change the beer name from "Best Select" to "Pabst Blue Ribbon."

Pabst was among the first executives to understand and utilize a national advertising campaign. More importantly, Pabst realized that he needed to make his product and insignia available and visible everywhere. He managed this by creating a real estate empire stretching from coast to coast and border to border. Hundreds upon hundreds of Pabst taverns or "tied houses" were built and leased around the country for twenty-five years. These tied houses were to display their logo and exclusively serve Pabst Brewing Company's products.

NOTE: As with all official WCE souvenirs, permission was given to companies to produce items for sale by the Fair's committee. This included official picture books, the many "so-called" half-dollar souvenir coins [not including the U.S. Government minting of 950,000 silver commemorative half-dollar coins in 1892 (original year to open the WCE) and another 1,548,300 minted coins were produced in 1893, which Chicago banks sold for $1 each.), etc.

Pabst continued to boast that their "Best Select" beer was picked as "Selected as America's Best in 1893" and has it printed on every bottle and can of original Pabst Beer.
The W.B. Conkley company was given permission to produce blue ribbons for the contestants and awarded a bronze medallion and official certificate. The ribbons were made of silk, with gold leaf lettering with gold fringe. Contestants were charged $2.50 ($85.00 today) for each ribbon that was non-existent during the Fair.
Pabst Brewery stated on their website, until very recently, that they were awarded the "Gold Medal for Brewing Excellence" at the Exposition.

“Awards are designed to indicate some independent and essential excellence in the article exhibited, and as an evidence of advancement in the state of the art represented by it. They will be granted, upon specific points of excellence or advancement, formulated in words by a Board of Judges or Examiners, who will be competent experts; and the evidence of such awards will be parchment certificates, accompanied by bronze medals. Such awards will constitute an enduring, historical record of development and progress, and at the same time afford exhibitors lasting mementoes of their success.”

ANOTHER DIRECT SOURCE:
"The Book of the Fair: a historical and descriptive presentation of the world's science, art, and industry, as viewed through the Columbian Exposition at Chicago in 1893" by Hubert Howe Bancroft. The Bancroft Company, Chicago - San Francisco. Published in 1893 [this antique book is in my personal collection].

Designed to set forth the display made by the Congress of Nations of human achievement in material form so as effectually to Illustrate the progress of mankind in all the departments of civilized life.

“As to awards and medals, it was decided, after much discussion, that they should be distributed among every class of exhibits. By congressional act of April 1890 it was provided that the national commission should, among other functions, appoint all judges and examiners for the Exposition and award all premiums, if any". At a later session of the national legislature $100,000 was appropriated for the casting of 50,000 bronze medals and for 50,000 diplomas, this but a small portion of the outlay to be incurred by the committee of awards.By many of the exhibitors protests were made against awards of any kind, some of them even threatening to withdraw their exhibits on the ground that they had everything to lose and nothing to gain by their goods being classed with those of inferior grade. This question determined, came the method of granting awards, whether by what were termed, in self-explanatory phrase, the single judge or the jury system, the latter the one adopted at former international exhibitions. The former provoked no little opposition, not only from exhibitors, but from the director-general and the chiefs of departments, whose tables were covered with written protests and offers to withdraw applications for exhibiting space. Especially were artists opposed to the single judge system, refusing to submit their work to the judgment of any single member of their profession. By the head of the Fine Arts department it was stated before the Board of Control that the adoption of this system would leave the galleries of the Art Palace almost bare of the choicest works of living artists.

Finally it was determined to place all decisions in the hands of juries, competitors to state their intention to compete for prizes, a written report to be filed in each instance, stating why an award had been made or withheld, and with right of appeal to the executive committee, by whom a re-examination might be ordered. In the interests of American artists and of the Department of Fine Arts advisory committees and juries of selection were established in the principal art centers of Europe and the United States. Of the organization and functions of these committees mention will be made in connection with art exhibits.”

WHAT WAS CLAIMED ON THE PABST MANSION WEBSITE:
Original Statement (9/2015):
"In November 1893, the Pabst Brewing Company was awarded the Gold Medal for Brewing Excellence at the Exposition. (Sorry, there was no blue ribbon)."

Their New Statement as of (06/2021):
The Mansion website now says "In November of 1893, the Pabst Brewing Company was presented with a certificate for brewing excellence at the Exposition, not the often thought blue ribbon."

WHAT WAS CLAIMED ON THE PABST BREWING COMPANY WEBSITE:
Statement on their website (10/2017):
"Pabst is awarded the blue ribbon at the Columbian Exposition in Chicago, beating out many other popular American brewers and, surprisingly, some unpopular ones."

Pabst Brewing Company's website removed all references to their history, in 2021.

ORGANIZATIONS YOU EXPECT TO HAVE THE FACTS CORRECT - DON'T.
Even after several attempts to correct their articles:
These organizations are revered and are expected to source stories for accuracy before printing historical information. They are propagating inaccurate information about Pabst and the 1893 World's Fair. You can see how wrong information gets accepted as fact.

The Smithsonian Institution ("first-palace award" note the misspelling), National Geographic (deleted the article from their website), and The Chicago Tribune (with many errors; "the brew was awarded the top beer award").
Then there's Mental Floss, who made up a non-existent, unprovable story:

"Leading Pabst by two points near the end of judging, Anheuser-Busch began celebrating early, ordering an award placard for their exhibit and taking out ads in the local papers announcing they had won the nonexistent grand prize and were the “King of Brewers.” After the final category had been scored, the judges’ table devolved into deadlock [1] and in-fighting, and a special supervisory committee [2] had to be formed to sort things out. In the end, Pabst ended up ahead of Busch by just a fraction of a point. Pabst quickly announced himself as the “grand prize winner,” even though his medal and certificate were exactly the same as those won by other brewers."  — Mental Floss

[1] There were no "deadlocks" because all contest participants who scored 80%, ALL CONTESTANTS, received the same medal and parchment award, whether only one contestant got 80%+ or 30 contestants received 80%. (A 'Win-Win.")

[2] No "Special Supervisory Committee" was formed because, per the written and published rules (see the book link above), there was no necessity for any arbutration.

Mental Floss amended their article to include the rules and prizes; A Bronze Medallion and Parchment Award Declaration.
MY RESEARCH CONVINCED PABST TO CORRECT ITS STATEMENT:
I am very pleased with the outcome I received from sending the Pabst Mansion, Pabst Brewing Co., and the Wisconsin Historical Society my research digitally and snail-mail beginning in 2017. They knew the truth for 124 years and backhandedly corrected themselves.
Copyright © 2017 Dr. Neil Gale, Ph.D., All Rights Reserved.
Presented by Dr. Neil Gale, Ph.D. at 10/24/2017 05:56:00 PM