There are Issues with Mrs. Lydia Bixby's letter to Massachusetts, Governor John Andrew about her 5 sons that died in the Civil War; the plot in Steven Spielberg's WWII Film, "Saving Private Ryan."

SUMMARY
In the autumn of 1864 Massachusetts, Governor John A. Andrew wrote to President Lincoln asking him to express condolences to Mrs. Lydia Bixby, a widow believed to have lost five sons during the Civil War.

Lincoln's letter to her was printed by the Boston Evening Transcript. Later it was revealed that only two of Mrs. Bixby's five sons died in battle, Charles and Oliver. Of the remainder, one deserted the army, one was honorably discharged, and another deserted or died a prisoner of war.

The authorship of Lincoln's letter has been debated by scholars, some of whom believe it was written instead by John Hay, one of Lincoln's White House secretaries. Apparently, the original letter was destroyed by the newspaper editor after publication or by Mrs. Bixby, who may have been a Confederate sympathizer and disliked President Lincoln. Copies of an early forgery have been circulating for many years, causing some people to believe they possess the original letter.
RESEARCH
"Saving Private Ryan," Steven Spielberg’s WWII blockbuster film prefaces its plot with the very moving reading of a famous letter of condolence written by Abraham Lincoln to Lydia Bixby, a widow in Boston who had lost five sons in the Civil War.

In the film Saving Private Ryan, a group of U.S. soldiers go behind enemy lines, after the Normandy landings, to retrieve a paratrooper whose brothers have been killed in action. One brother is killed in action, then two more brothers are killed. Their mother, Mrs. Ryan, is to receive all three of the grave telegrams on the same day. The United States Army Chief of Staff is given an opportunity to alleviate some of her grief when he learns of a fourth brother in action, Private James Ryan, and decides to send out 8 Rangers to find Private Ryan and bring him back home to his mother.

Following is the condolence letter that President Lincoln sent to Mrs. Bixby. 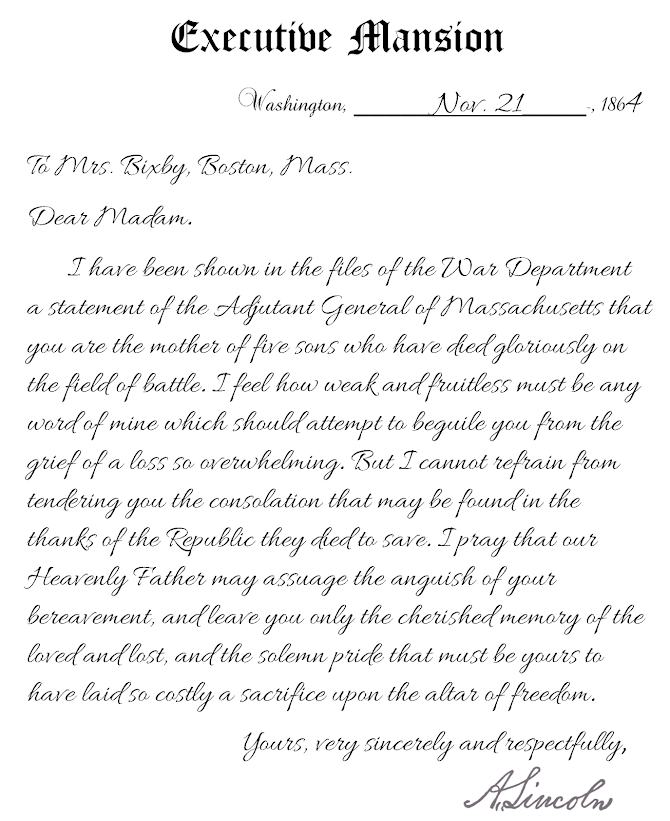 The letter has long been legendary among students and scholars of Lincoln. The eminent Lincoln authority James G. Randall declared that it “stands with the Gettysburg Address as a masterpiece in the English language.” Carl Sandburg called it “a piece of the American Bible” that “more darkly than the Gettysburg speech… wove its awful implication that human freedom so often was paid for with agony.” Another historian, Daniel Kilham Dodge, wrote that “we can imagine how that great heart throbbed and that strong, beautiful right hand rapidly traversed the paper while he was bringing comfort to a bereaved patriot mother. There was as true lyrical inspiration at work… as that which impelled Wordsworth to compose the ‘Ode on Intimations of Immortality.’”
Yet the letter is hardly what it seems. Mrs. Bixby to whom it was addressed was in fact a Confederate sympathizer who ran a brothel.

Sarah Cabot Wheelwright, a Boston matron who became acquainted with Mrs. Bixby during the Civil War, described her as “a stout woman, more or less motherly-looking, but with shifty eyes.” Wheelwright and a friend considered hiring Mrs. Bixby until “the police on finding that we were helping this woman … told [the friend] that she kept a house of ill-fame, was perfectly untrustworthy and as bad as she could be.”
Mrs. Bixby’s granddaughter recalled that her grandmother “was secretly in sympathy with the Southern cause” and had “little good to say of President Lincoln.” She added, “I remember so clearly my surprise when my mother told me how Mrs. Bixby resented” the letter. The widow’s great-grandson similarly recalled that as a youth “I was advised by my Father that my Great-Grandmother was an ardent Southern Sympathizer, and when she received the letter, she destroyed it in anger… shortly after receipt without realizing its value.”
What’s more, Mrs. Bixby had lied about her sons. They weren’t really all dead. The genesis of the letter began when she showed William Schouler, the adjutant general of Massachusetts, what he described as “five letters from five different company commanders” each telling “the poor woman of the death of one of her sons.” He told Gov. John A. Andrew she was “the best specimen of a true-hearted Union woman I have yet seen” and encouraged him to write Lincoln. But she had actually lost only two boys in the war. Of the three others, one had deserted to the enemy, another deserted, and the third was honorably discharged.
She may have been hoping for money. In 1862 she claimed that one of her sons had been wounded at Antietam and asked for financial help to visit him in a Maryland hospital; Governor Andrew gave her forty dollars. War Department records contain no indication that any of Mrs. Bixby’s sons were wounded at Antietam. She also received money from the public after Schouler published an appeal in the Boston Traveller, in November 1864, for funds to assist families wishing to provide “good New England Thanksgiving dinners” to troops in the field. He made a special plea for “a poor but most worthy widow lady … who sent five sons into this war, all the children she had, every one of whom has fallen nobly in battle.” A few days later the Traveller reported that “a considerable amount of money was received for soldiers’ families, and some were sent especially for the lady to whom allusion was made. General Schouler visited her and left the money, and called yesterday to see that she had everything comfortable for Thanksgiving.”
Thus the historian William E. Barton was justified when in 1926 he deemed the Bixby letter “a beautiful blunder.” He was probably not justified, however, when he insisted that Lincoln himself wrote it. That, too, is very doubtful. In fact, it was almost certainly composed by Lincoln’s assistant personal secretary, John Hay. Nicholas Murray Butler, president of Columbia University, told Barton that Hay had written it, having heard from the British diplomat John Morley that Hay had admitted as much. Barton expressed skepticism, but Hay had told others that he had written it too, including the literary editor William Crary Brownell and the U.S. ambassador to Great Britain, Walter Hines Page. Spencer Eddy, Hay’s personal secretary, also insisted Hay had written the letter.
In 1866 Hay told Lincoln’s law-partner-turned-biographer William H. Herndon that Lincoln had written “very few letters. He did not read one in fifty that he received. At first, we tried to bring them to his notice, but at last, he gave the whole thing over to me, and signed without reading them the letters I wrote in his name.” Lincoln would have been especially inclined to ask Hay to write letters for him during an unusually hectic time such as November 1864. That month Hay apologized to Charles S. Spencer, a New York Republican leader: “I regret that the President was literally crowded out of the opportunity of writing you a note for yr. banquet. He fully intended to do so himself &C for that reason I did not prepare a letter for him. But the crush here just now is beyond endurance.”
Most Lincoln specialists have, like Barton, resisted the notion that Hay wrote the Bixby letter. In 1943 Roy P. Basler, editor-to-be of The Collected Works of Abraham Lincoln, dismissed Hay’s remark to Herndon as “inadequate, inaccurate, and incorrect.” If Hay had written the Bixby letter at all, Basler insisted, he probably had simply taken down words dictated by Lincoln. Basler argued that “the internal evidence of style seems to mark the letter as Lincoln’s. If the student will read aloud the best of Lincoln’s lyrical passages in the ‘Farewell Address,’ ‘Gettysburg Address,’ or ‘Second Inaugural Address’ and then read aloud the ‘Letter to Mrs. Bixby,’ he will find it exceedingly difficult to believe that anyone other than Lincoln composed such sentences.”
However, in various letters, poems, and other compositions, Hay frequently used words and phrases that appear in the Bixby letter; some of them never appear in Lincoln’s works, and others appear far less often in Lincoln’s writings than in Hay’s. Hay used the word beguile at least thirty times, while Lincoln never used it. Hay occasionally employed the phrases “I pray that our Heavenly Father” and “I cannot refrain from tendering you,” while Lincoln never did. Hay used the words glory and cherish far more often than Lincoln did. Moreover, the tone of the Bixby letter resembles that of several of Hay’s messages of condolence, including this one written five months before the Bixby letter: “I will not intrude upon your sorrow further than to express my deep sympathy for your great loss and my prayer that a merciful God may give you that consolation which mortal love is too weak to offer.”

Moreover, a scrapbook donated to Brown University in 1954 as part of John Hay’s papers, which contains newspaper accounts of Hay’s writings, includes among various items a copy of the Bixby letter. So does a similar scrapbook in the Library of Congress. It is difficult to understand why Hay would have pasted the Bixby letter into these scrapbooks, full of his own literary creations unless he had composed it.
This evidence may not amount to hard proof, hut Hay’s statement to Herndon in 1866; Hay’s stylistic fingerprints throughout the letter (“beguile, cherish, gloriously, I cannot refrain from tendering, I pray that our Heavenly Father”); the reminiscences of John Morley, Walter Hines Page, W. C. Brownell, Spencer Eddv, and others; and Hay’s scrapbooks all combine to suggest that Hay, not Lincoln, is most likely the true author of “the most beautiful letter ever written.”
This conclusion cannot, of course, in the least affect Lincoln’s literary reputation. The author of the Gettysburg Address and the Second Inaugural will always command the world’s admiration. As a journalist wrote in 1925, “If under the merciless hand of investigation it should be shown that this remarkable document was not only based upon misinformation but was not the composition of Lincoln himself, the letter to Mrs. Bixby would still remain… ‘One of the finest specimens of pure English extant.’” The letter can never diminish the status of Lincoln, but it deserves to elevate that of John Hay. And it has long since won Mrs. Bixby, most unlikely, immortality.
Compiled by Dr. Neil Gale, Ph.D.
Michael Burlingame, Contributor
Presented by Dr. Neil Gale, Ph.D. at 12/16/2020 12:06:00 PM