The Farragut Boat Club was organized in 1872, and, as its name indicates, for the purpose of promoting the interests of boating. Beginning with a limited number of members, and a small boathouse at the foot of Twelfth Street (Twelfth '12th' Street was renamed Roosevelt Road on May 25, 1919), it had gradually increased until it had reached the pictured flourishing condition.

The clubhouse was located at 413-415 Lake View Avenue (3016-18 Lake Park Avenue today). It was completed in the spring of 1886 by Architect, Robert Rae Jr.[1], a leading Chicago architect in the 1890s. It was a handsome two-story, with a basement, brick building with stone trimmings. 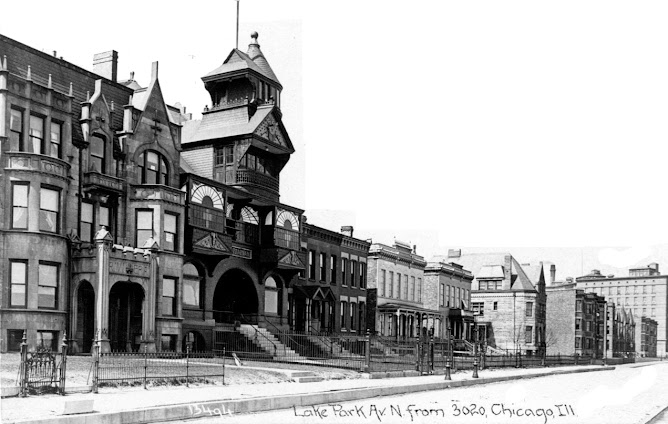 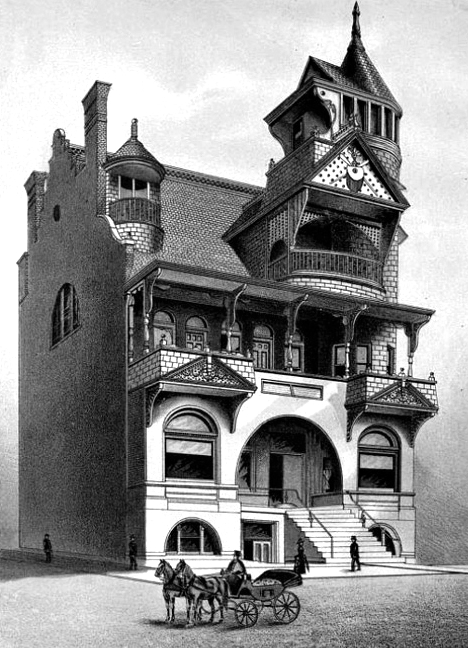 In the basement, there was a bowling alley, a pool room, a gymnasium, and the lavatories. The first floor contained parlors, a reception room, a billiard room, a card room, and a library. The second floor was devoted to the dancing hall and a richly appointed theatre, with a full stock of scenery and props (theatrical property), and a seating capacity of four hundred. A series of entertainments were given there each winter, and the Farragut Boat Club Theatricals had become renowned at a level rarely obtained by amateur thespians.

The boathouse was a one-story brick building, at the foot of Thirty-third Street. The Club owned about twenty-five boats, including an eight-oared barge, four-oared shells, four-oared gigs, single and double shells, single and double training boats, and pleasure boats of all descriptions. The initiation fee to the Farragut Boat Club was $50 ($1,450 today) and yearly dues of $24 ($700 today).

Fact: The first softball game was invented and played on Thanksgiving Day in 1887 inside of the basement gym at Farragut Boat Club. The location is now an empty lot. The clubhouse, what was left of it, was razed in 1952.

There was a monument at the site but had been moved.
Compiled by Dr. Neil Gale, Ph.D.
[1] Robert Rae Jr. (c.1853-1920) was born in Philadelphia and came to Chicago with his parents in 1860. The son of a prominent lawyer, he was educated in the public schools of Chicago and entered the office of architect Henry Lord Gay in about 1872. Two years later, he was appointed assistant chief engineer of the Chicago & South Atlantic Railroad, a position he held for a number of years before he started his own architectural office in Chicago in about 1880. Rae's practice focused on small scale commercial buildings and residences in eclectic historical styles.
Presented by Dr. Neil Gale, Ph.D. at 12/15/2020 08:12:00 PM