The History of 16-inch Softball in Chicago, Illinois.

The softball game started in Chicago on Thanksgiving 1887 at the "Farragut Boat Club" when Yale and Harvard Alumni wrapped up a boxing glove and hit the “ball” with a broomstick. Those men formalized the indoor game, and eventually, the game was played outdoors. The parks and school grounds were small in Chicago, so the ball had to be larger to stay in the park.
The 16″ ball became the size of choice and game of choice during the Great Depression since only a bat and a ball was needed. No-glove 16" softball has also been famous in Chicago alone since the 1920s.

Chicago is well known for many reasons — its architecture, museums, beautiful open lakefront, rich social and political history, blues music, a storied professional sports history, and diverse ethnic mix. There is a unique sport, though, one that’s been played by thousands of men and women for generations for both fun and glory for over eight decades, a game that is truly unique to Chicago — 16-inch softball.
Chicago softball is played barehanded with gnarled fingers and knuckles that tell stories of errors and victories in games long past. It’s safe to say that most Chicagoans have played the game in school, at a picnic, and Sunday pick-up games in Chicagoland parks or in league play.

16-inch was a perfect game for Chicago’s small neighborhood ball fields and cinder-covered school playgrounds. The ball didn’t travel as far as the smaller 12" and 14" softballs. And the absence of gloves benefited everyone in the tough economic times of the 1930s. Teams had only to chip in 10¢ a man for a new ball, and women took to the sport because it was less dangerous than a regular baseball. The sport was all the more appealing due to its being organized by families, community, and ethnic backgrounds at first. Then teams were sponsored by the companies its players worked for — a tradition that is still largely followed today.

The game of softball is enjoyed by millions of people around the world. This sport, for all ages, is played with different size diameter balls and with and without gloves. In Chicago, the most prevalent game played is slow pitch 16″ softball with no gloves. Many who have played different brands of softball feel 16″ is the best game of softball because it demands that every fielder play defense (anyone can catch a ball with a glove) well or become a team liability. Offense play is like baseball; few runs are due to home runs, and it’s basically hit’em where they ain’t, and moving runners is a normal strategy. It’s a great game with a unique history.

The first national championship was played at the 1933 World’s Fair in Chicago thanks to the sponsorship of William Randolph Hearst. Due to the fact most teams that entered the tournament all played with different rules and size balls, they finally agreed to play with a 14″ ball. Future City titles would be played at Wrigley Field.

Because of the game’s popularity shown at that event, 16″ no glove softball took on a professional level when Harry Hanin started the "Windy City League" the next year in 1934 and lasted into the 1950s. Teams had their own stadiums and charged admission. They attracted thousands of people each night. Remember, there was no TV and only two racetracks. These teams and players infamous represented their areas, but gambling was the real game outside the lines. They often attracted over 10,000 each night and had more attendance than at the Cubs and/or Sox games that day.

During the Chicago softball craze, teams played in these neighborhood baseball and softball (12" & 16") parks:
Most all the semi-professional parks were lighted for night play, and a considerable portion of the attendance was reported on evenings during the week and were frequently doubleheaders. The usual Saturday and Sunday games were frequently tripleheaders.

Many of the visiting men's teams feature unusual costumes such as clown uniforms, grass skirts, and natural beards to inject color into the game. In addition, such novelties as playing the game on mules are introduced occasionally.

Many weekend games began with the women's teams. "Bloomer Girls" baseball teams barnstormed the United States from the 1890s to 1934, playing local town, semi-pro, and minor league men's teams. They traveled across the country, across states, and town-to-town by rail, bringing their own fences, tents, and grandstands with them, and their schedules were grueling. In 1903, the Boston Bloomer Girls played and won 28 games in 26 days. Over the July Fourth weekend of that year alone, they played six games in five different towns in Oklahoma.

Then came the "All-American Girls Professional Baseball League" (AAGPBL), a professional women's baseball league founded by Philip K. Wrigley from 1943 to 1954. The women's initial tryouts were held at Chicago's Wrigley Field. In the first season, the league played a hybrid game of baseball and softball using a 12-inch ball. The AAGPBL was the forerunner of women's professional league sports in the United States. Over 600 women played in the league, which consisted of eventually 10 teams located in the American Midwest. In 1948, league attendance peaked at over 900,000 spectators. The most successful team, the Rockford Peaches, won a league-best four championships. The 1992 motion picture "A League of Their Own" is a mostly fictionalized account of its early days and stars.
In 1973 the local 16-inch ASA Commissioner felt that out of state teams could not compete with Illinois because they were used to playing with gloves in 12″ and 14″ play. He was right. He attracted 13 out-of-state teams for a new league. The gloves never made a difference in the score, and Chicago teams still dominated the national tournaments. Because of that, fewer out of states teams played the game seriously other than in the Midwest. The one state with an excellent program was Iowa, and their patience paid off in 1995 when the "Carpet Country Rollers" won the only title in ASA history by a team not from Chicago. They did it in the last inning, scoring 3 runs with two outs and winning by one run. What an upset!

No glove softball is still played by all Chicagoans, and the best of the best have played Forest Park’s No Glove Nationals in front of thousands of fans for 5 decades, without a doubt the premier event each year. A few of the best leagues have been played at Clarendon Park, Portage Park, James Park in Evanston, and Mt.Prospect Park in the Northside and Washington Park, Clyde, Oak Lawn, and Kelly Park on the Southside.

When former President Jimmy Carter, a softball enthusiast, was presented with a 16-inch softball during a 1998 Chicago visit, the unfamiliar object fascinated him. It's not surprising that he had never seen one before because although thousands of games of 16-inch softball fill Chicago's parks every summer Sunday, President Cater only knew about 12" softballs.

Many ASA Nationals have been played out of Illinois, usually in Iowa. In 2004 both the Major and ASA Nationals were played in Arizona and attracted the most states to compete in 20 years. In fact, in Phoenix, they have held the "Avnet Business to Business Classic" since 2003, reaching 30 plus teams and even getting some title games on television for both the co-ed and men’s divisions. 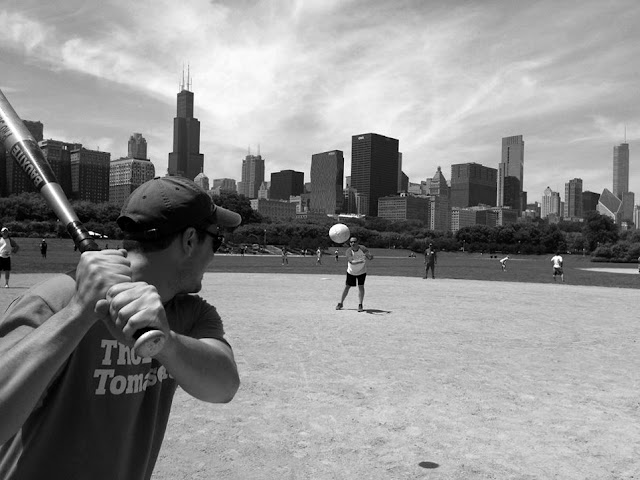 The sport has traveled to different cities due to Chicagoans moving, but the reality is when men and women play 16-inch ball, they realize it takes more skill, is safer, less time to play, and is more fun than 12-inch softball. Critics of the 12-inch game say that “anyone can catch a ball with a glove." Those games take too long because the scores are too high, and people are getting hurt.

ALTERNATIVE: Who and where 'softball' was invented.

A lieutenant with the Minneapolis, Minnesota Fire Department, Lewis Rober was pushing 40 and perhaps getting a little flabby. So in 1895, he devised a sporting alternative to keep himself and his fellow firefighters fit between runs. Rober is widely considered the founding father of softball — at least the outdoor version of the game now enjoyed by 40 million people. He took the basics of baseball, shrank the field, and used a cushy ball pitched underhand. With no gloves needed and less time required, the recreational version of baseball took off.

[1] Robert Rae Jr. (c.1853-1920) was born in Philadelphia and came to Chicago with his parents in 1860. The son of a prominent lawyer, he was educated in Chicago's public schools and entered the office of architect Henry Lord Gay in about 1872. Two years later, he was appointed assistant chief engineer of the Chicago & South Atlantic Railroad, a position he held for several years before starting his own architectural office in Chicago in about 1880. Rae's practice focused on small-scale commercial buildings and residences in eclectic historical styles.
Presented by Dr. Neil Gale, Ph.D. at 3/24/2020 04:58:00 PM