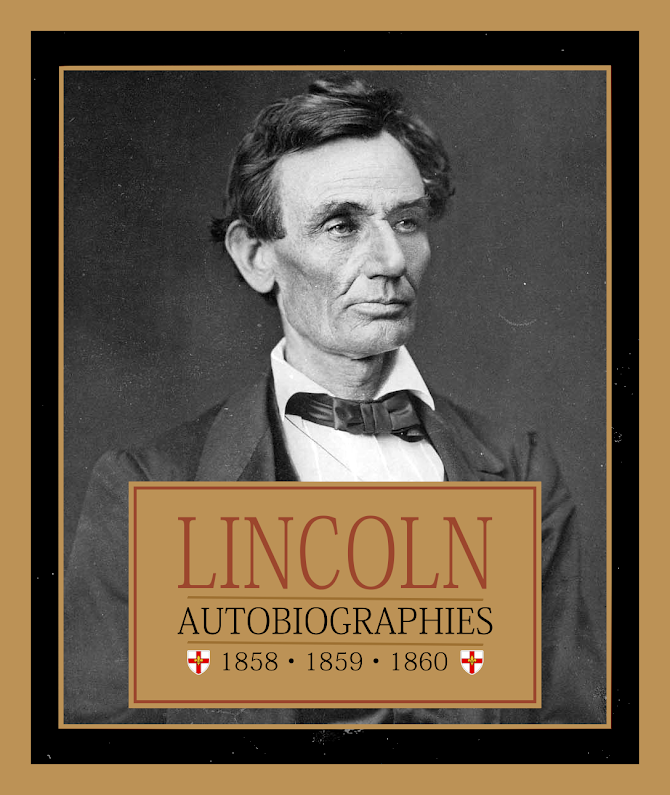 This first, terse effort was prepared at the request of Charles Lanman, who was compiling the Dictionary of Congress.

Lincoln wrote this second autobiography for Jesse Fell, a long-time Illinois Republican friend who was a native of Pennsylvania. Fell used his influence to get the piece incorporated in an article appearing in a Pennsylvania newspaper on February 11, 1860. Lincoln enclosed the autobiography in a letter to Fell which said, "There is not much of it, for the reason, I suppose, that there is not much of me."

I was born Feb. 12, 1809, in Hardin County, Kentucky. My parents were both born in Virginia, of undistinguished families—second families, perhaps I should say. My mother, who died in my tenth year, was of a family of the name of Hanks, some of whom now reside in Adams and others in Macon Counties, Illinois. My paternal grandfather, Abraham Lincoln, emigrated from Rockingham County, Virginia, to Kentucky, about 1781 or 1782, where, a year or two later, he was killed by Indians, not in battle, but by stealth, when he was laboring to open a farm in the forest. His ancestors, who were Quakers, went to Virginia from Berks County, Pennsylvania. An effort to identify them with the New-England family of the same name ended in nothing more definite than a similarity of Christian names in both families, such as Enoch, Levi, Mordecai, Solomon, Abraham, and the like.
My father, at the death of his father, was but six years of age; and he grew up, literally without education. He removed from Kentucky to what is now Spencer County, Indiana, in my eighth year. We reached our new home about the time the State came into the Union. It was a wild region, with many bears and other wild animals, still in the woods. There I grew up. There were some schools, so-called; but no qualification was ever required of a teacher beyond "readin, writin, and cipherin" to the Rule of Three. If a straggler supposed to understand Latin happened to sojourn in the neighborhood, he was looked upon as a wizard. There was absolutely nothing to excite ambition for education. Of course, when I came of age I did not know much. Still, somehow, I could read, write, and cipher to the Rule of Three; but that was all. I have not been to school since. The little advance I now have upon this store of education, I have picked up from time to time under the pressure of necessity.
I was raised to farm work, which I continued till I was twenty-two. At twenty one I came to Illinois and passed the first year in MaconCounty. Then I got to New-Salem (at that time in Sangamon, now in MenardCounty), where I remained a year as a sort of Clerk in a store. Then came the Black Hawk War; and I was elected a Captain of Volunteers—a success which gave me more pleasure than any I have had since. I went the campaign, was elated, ran for the Legislature the same year (1832), and was beaten—the only time I ever have been beaten by the people. The next, and three succeeding biennial elections, I was elected to the Legislature. I was not a candidate afterward. During this Legislative period, I had studied law, and removed to Springfield to practice it. In 1846 I was once elected to the Lower House of Congress. Was not a candidate for re-election. From 1849 to 1854, both inclusive practiced law more assiduously than ever before. Always a Whig in politics, and generally on the Whig electoral tickets, making active canvasses—I was losing interest in politics when the repeal of the Missouri Compromise aroused me again. What I have done since then is pretty well known.
If any personal description of me is thought desirable, it may be said, I am, in height, six feet, four inches, nearly; lean in flesh, weighing on an average one hundred and eighty pounds; dark complexion, with coarse black hair, and grey eyes—no other marks or brands recollected.
The Third and Last Autobiography - June 1860

When Lincoln first ran for President, John L. Scripps of the Chicago Press and Tribune asked him for an autobiography to write a campaign biography about him. This third-person account is the result. The longest of his autobiographies, it offers fascinating information about his early years.

"Resolutions upon the subject of domestic slavery having passed both branches of the General Assembly at its present session, the undersigned hereby protest against the passage of the same.
They believe that the institution of slavery is founded on both injustice and bad policy, but that the promulgation of abolition doctrines tends rather to increase than abate its evils.
They believe that the Congress of the United States has no power under the Constitution to interfere with the institution of slavery in the different States.
They believe that the Congress of the United States has the power, under the Constitution, to abolish slavery in the District of Columbia, but that the power ought not to be exercised unless at the request of the people of the District.
The difference between these opinions and those contained in the above resolutions is their reason for entering this protest."
Dan Stone,
A. Lincoln
Representatives from the County of Sangamon.

In 1838 and 1840, Mr. Lincoln's party voted for him as Speaker, but being in the minority he was not elected. After 1840 he declined reelection to the legislature. He was on the Harrison electoral ticket in 1840, and on that of Clay in 1844, and spent much time and labor in both those canvasses. In November 1842, he was married to Mary, daughter of Robert S. Todd, of Lexington, Kentucky. They have three living children, all sons, one born in 1843, one in 1850, and one in 1853. They lost one, who was born in 1846.
In 1846 he was elected to the Lower House of Congress, and served one term only, commencing in December 1847, and ending with the inauguration of General Taylor, in March 1849. All the battles of the Mexican war had been fought before Mr. Lincoln took his seat in Congress, but the American army was still in Mexico, and the treaty of peace was not fully and formally ratified till the June afterward. Much has been said of his course in Congress in regard to this war. A careful examination of the "Journal" and "Congressional Globe" shows that he voted for all the supply measures that came up, and for all the measures in any way favorable to the officers, soldiers, and their families, who conducted the war through: with the exception that some of these measures passed without yeas and nays, leaving no record as to how particular men voted. The "Journal" and "Globe" also show him voting that the war was unnecessarily and unconstitutionally begun by the President of the United States. This is the language of Mr. Ashmun's amendment, for which Mr. Lincoln and nearly or quite all other Whigs of the House of Representatives voted.
Mr. Lincoln's reasons for the opinion expressed by this vote were briefly that the President had sent General Taylor into an inhabited part of the country belonging to Mexico, and not to the United States, and thereby had provoked the first act of hostility, in fact the commencement of the war; that the place, being the country bordering on the east bank of the Rio Grande, was inhabited by native Mexicans, born there under the Mexican government, and had never submitted to, nor been conquered by, Texas or the United States, nor transferred to either by treaty; that although Texas claimed the Rio Grande as her boundary, Mexico had never recognized it, and neither Texas nor the United States had ever enforced it; that there was a broad desert between that and the country over which Texas had actual control; that the country where hostilities commenced, having once belonged to Mexico, must remain so until it was somehow legally transferred, which had never been done.
Mr. Lincoln thought the act of sending an armed force among the Mexicans was unnecessary, inasmuch as Mexico was in no way molesting or menacing the United States or the people thereof; and that it was unconstitutional, because the power of levying war is vested in Congress, and not in the President. He thought the principal motive for the act was to divert public attention from the surrender of "Fifty-four, forty, or fight" to Great Britain, on the Oregon boundary question.
Mr. Lincoln was not a candidate for reelection. This was determined upon and declared before he went to Washington, in accordance with an understanding among Whig friends, by which Colonel Hardin and Colonel Baker had each previously served a single term in this same district.
In 1848, during his term in Congress, he advocated General Taylor's nomination for the presidency, in opposition to all others, and also took an active part for his election after his nomination, speaking a few times in Maryland, near Washington, several times in Massachusetts, and canvassing quite fully his own district in Illinois, which was followed by a majority in the district of over 1500 for General Taylor.
Upon his return from Congress, he went to the practice of the law with greater earnestness than ever before. In 1852 he was upon the Scott electoral ticket and did something in the way of canvassing, but owing to the hopelessness of the cause in Illinois he did less than in previous presidential canvasses.
In 1854 his profession had almost superseded the thought of politics in his mind when the repeal of the Missouri Compromise aroused him as he had never been before.
In the autumn of that year, he took the stump with no broader practical aim or object than to secure, if possible, the reelection of Hon. Richard Yates to Congress. His speeches at once attracted more marked attention than they had ever before done. As the canvass proceeded he was drawn to different parts of the State outside of Mr. Yates' district. He did not abandon the law but gave his attention by turns to that and politics. The State agricultural fair was at Springfield that year, and Douglas was announced to speak there.
In the canvass of 1856, Mr. Lincoln made over fifty speeches, no one of which, so far as he remembers, was put in print. One of them was made at Galena, but Mr. Lincoln has no recollection of any part of it being printed; nor does he remember whether in that speech he said anything about a Supreme Court decision. He may have spoken upon that subject, and some of the newspapers may have reported him as saying what it now ascribed to him, but he thinks he could not have expressed himself as represented.
Written by Abraham Lincoln
Edited for misspellings and punctuation by Dr. Neil Gale, Ph.D.
Presented by Dr. Neil Gale, Ph.D. at 12/20/2020 01:33:00 AM