The Real Story About a Tavern License for the Berry-Lincoln Store in New Salem, Illinois.

In the spring of 1831, at 22 years old, Abraham Lincoln arrived in a flatboat in New Salem, where he would live for the next six years. He soon made friends with William "Bill" Franklin Berry, a hard-working young man who was the son of Reverend John McCutchen Berry, founder of Rock Creek Cumberland Presbyterian Church, and a Christian leader. Apparently, the business attracted Lincoln for lack of other plans.
In August 1832, Abraham Lincoln entered into a partnership as a storekeeper with Berry in the town of New Salem. William Berry was noted as being a very astute businessman. Contrary to popular belief, he did not leave a large debt for Lincoln to pay off and is, in fact, noted for having paid off some of Lincoln's personal debts. Bill died of Malaria fever on January 10, 1835, at the young age of 24. 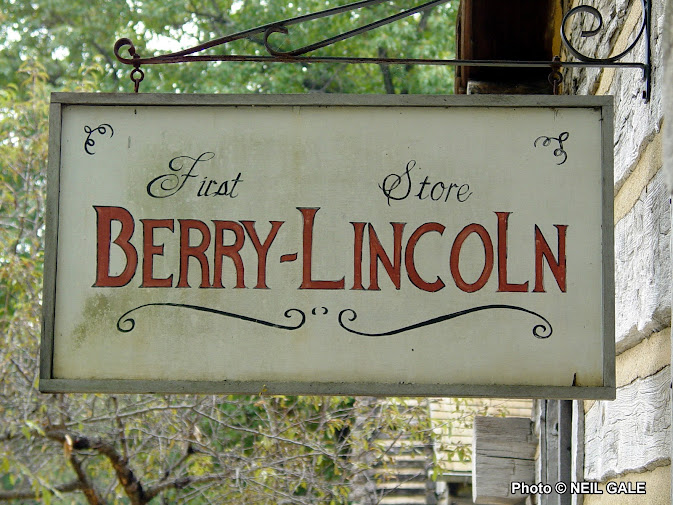 The two men were thriving merchants for a short time until they bought Rubin Radford's stock of goods, then moved across Main Street into the second "Berry-Lincoln Store." The second Store was probably the first building in the original village of New Salem, being constructed in 1829. The building was sold to Berry and Lincoln as a General or Dry Goods Store in January of 1833. 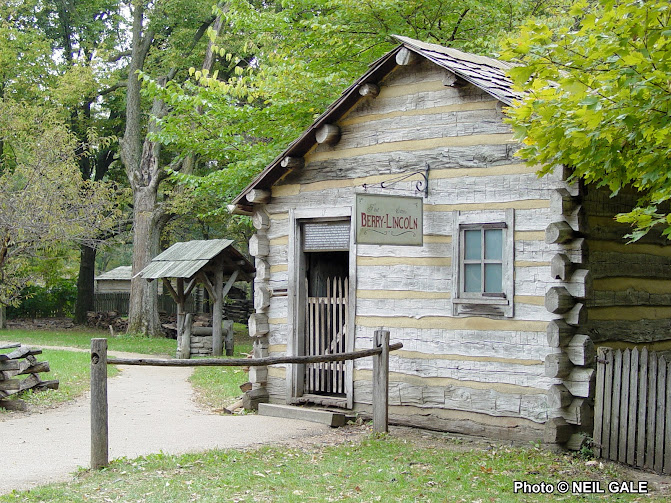 The second Berry-Lincoln store was north on Main Street and was a one-story frame building, twenty feet square on the outside, and consisted of two rooms. One was a large room in front with a smaller room adjoining on the north. The smaller room had a fireplace. Mr. Lincoln stayed there. When it was slow, as it often was, Lincoln would get lost in the pages of a book.
This venture in the 2nd building didn't last long. A liquor license was issued on March 6, 1833. According to Lincoln, the business simply put him deeper and deeper in debt. According to the New Salem tradition, Lincoln was more interested in reading and talking politics while Berry was interested in drinking the spirits. In April of 1833, Abe sold his interest in the Berry-Lincoln store to Berry after only 3 months, and Berry sold out to the Trent Brothers.
A printed document featuring a tavern license taken out in the name of Berry and Lincoln at New Salem has circulated for years. There have been many posters of various sizes presenting this information, which have become known to Lincoln scholars as "The Tavern License Broadside."
This reproduction of two early documents associated with Lincoln's New Salem days, which may be found in many forms and sizes, is usually captioned "Abraham Lincoln's Saloon License" and has been given nationwide circulation. A picture of Lincoln is often associated with a facsimile of the tavern license taken out by William F. Berry, and another facsimile of a "good behavior" bond purported to be signed by Abraham Lincoln, William F. Berry, and John Bowling Green. Without careful scrutiny, the observer would conclude that here is positive proof that Abraham Lincoln at one time ran the general or dry goods store as a tavern/saloon or a "grocery" as it was then called. It is apparent from notations on the broadsides and the featuring of the alleged Lincoln signature that the purpose of the broadsides is to convey this idea.
The Collected Works of Abraham Lincoln should be accepted as a final authority on the genuineness of all original documents that have come to its editors' attention. Roy P. Basler and his assistant, Mrs. Harry Pratt, who are experts in the field of Lincoln's handwriting, in passing on the authenticity of writings submitted, also have had the professional advice of three other Lincoln authorities, Paul M. Angle, the late J. G. Randall, and Benjamin P. Thomas.
Appendix two in the Collected Works presents a list of documents where someone other than Lincoln signed his name. The first manuscript noted where this occurs is on the peace bond mentioned above. The comment of the editors of the Collected Works who had before them this original bond is now in the archives of the Illinois State Historical Society.

Here these authorities substantiate what leading Lincoln scholars have claimed for years that the signature in question is not that of Abraham Lincoln. William Townsend, in his book Lincoln and Liquor, published as early as 1934, states: "Apparently Berry subscribed his partners' name to the document since an examination of the original shows that it is not in Lincoln's handwriting."
The other manuscript usually displayed, although not given so much prominence, is the license that was issued on the strength of the bond. It, however, was taken out by William Berry and apparently issued to him personally to do business in the name of Berry and Lincoln. An excerpt from the license follows:

Ordered that William F. Berry, in the name of Berry & Lincoln, have a license to keep a tavern in New Salem to continue twelve months from this date and that they pay $1 in addition to the $6 heretofore paid as sub-treasury receipt and that they be allowed the following rates:

As an example of another liquor license, the Green Tree Tavern, established in 1833 at Lake and West Water Streets in Chicago, a Cook County Liquor License, costing $5, which permitted the recipient to not only sell carryout pints of spirits but to also keep an inn and tavern serving drinks at a bar and with meals. My Green Tree Tavern article includes an eye-opening first-hand account of an overnight stay. The Green Tree Tavern license contained printed regulations and maximum charges:

As was customary, in those days, most general or dry good stores sold spirits, some having a serving license for shots and glasses of liquor at the business's bar or tables.
While the documents seem to designate the firm name of the tavern operators as Berry and Lincoln, it is evident that Lincoln was not present when the bond was signed, or it would have contained his actual signature. The same conclusion might be drawn regarding granting the license to Berry individually instead of to the partner Berry and Lincoln.

UNFOUNDED CLAIM: "I [Daniel Green Burner] clerked in the [Barry-Lincoln] store through the winter of 1833-34 {, up to the 1st of March. While I was there they had nothing for sale but liquors. They may have had some groceries before that, but I am certain they had none then. I used to sell whiskey over their counter at 6¢ a glass—and charged it too. N. A. Garland started a store, and Lincoln wanted Berry to ask his father for a loan, so they could buy out Garland; but Berry refused, saying this was one of the last things he would think of doing." —Abraham Lincoln the Man of the People, Norman Hapgood, page 37, published 1899.

NOTE: The 2nd Berry-Lincoln store was open from January 1833 and closed in April 1833; the liquor license was obtained on March 6, 1833. William Berry sold out to the Trent Brothers shortly thereafter, so Daniel Green Burner has the owner or time-frame wrong.

During the first debate with Lincoln at Ottawa on August 21, 1858, Douglas made this statement early in his speech:

"I have known him (Lincoln) for nearly twenty-five years. There were many points of sympathy between us... I was a school teacher in the town of Winchester, and he a flourishing grocery-keeper in the town of Salem. (Applause and laughter)."

Mr. Lincoln opened his argument with Douglas in these words:

"When a man hears himself somewhat misrepresented, it provokes him—at least, I find it so with myself; but when the misrepresentation becomes very gross and palpable, it is more apt to amuse him. (Laughter)."

Lincoln then goes on to discuss some politically important questions in which he had been misrepresented, passing by the more personal allusions until later in the speech when he says:

"Now I pass on to consider one or two more of these little follies. The Judge is woefully at fault about his early friend Lincoln being a 'grocery keeper.' (Laughter). I don't know as it would be a great sin, if I had been, but he is mistaken. Lincoln never kept a grocery anywhere in the world. (Laughter)."

Abraham Lincoln, in his speech at Charleston, Illinois, during the debate on September 18, 1858, gave the definition of a forgery:

"What is a forgery? It is the bringing forward something in writing or in print purporting to be of certain effect when it is altogether untrue."

With this definition before us and the statement of Lincoln's that he "never kept a grocery," we are inclined to look upon this whole tavern license transaction as it is now so widely publicized as a forgery. There is a tradition extant that Berry's procedure in securing the tavern license was responsible for the immediate dissolution of the merchandise partnership of the two men at New Salem.
Compiled by Dr. Neil Gale, Ph.D.
Presented by Dr. Neil Gale, Ph.D. at 11/23/2020 01:16:00 AM