Lincoln's Logic - How Lincoln Learned to Tell When a Thing Is Proved.

A man who heard Abraham Lincoln speak in Norwich, Connecticut on March 9, 1860, in support of Republican Governor William Alfred Buckingham’s re-election, two months prior to his nomination for president, was greatly impressed by the closely-knit logic of the speech Lincoln gave.

Meeting him the next day on a train he asked Mr. Lincoln how he acquired his wonderful logical powers and such acuteness in the analysis. Lincoln replied:

"It was my terrible discouragement which did that for me. When I was a young man, I went Into an office to study law. I saw that a lawyer's business is largely to prove things. I said to myself, 'Lincoln, when is a thing proved?' That was a poser. What constitutes proof? Not evidence; that was not the point. There may be evidence enough, but wherein consists the proof? I groaned over the question, and finally said to myself, 'Ah, Lincoln, you can't tell.' Then I thought what use is it for me to be In a law office if I can't tell when a thing Is proved?

So I gave it up and went back home. Soon after I returned to the old log cabin I fell in with a copy of Euclid's Elements of Geometry. I had not the slightest notion of what [or who] Euclid was, and I thought I would find out. I, therefore, began at the beginning, and before spring I had gone through the old Euclid's geometry and could demonstrate every proposition in the book. Then in the spring, when I had got through with it, I said to myself one day, 'Ah, do you know when a thing is proved?' and I answered, 'Yes, sir, I do. Then you may go back to the law shop;' and I went." 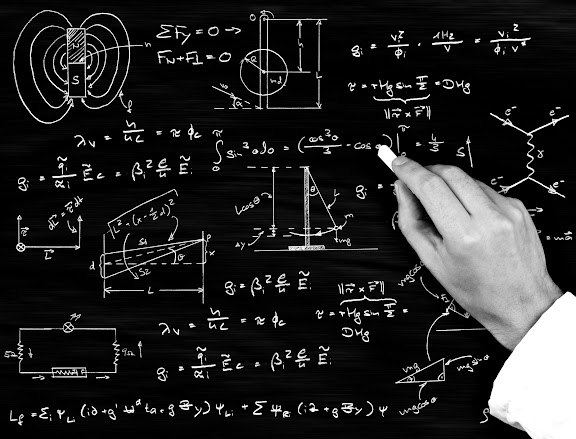 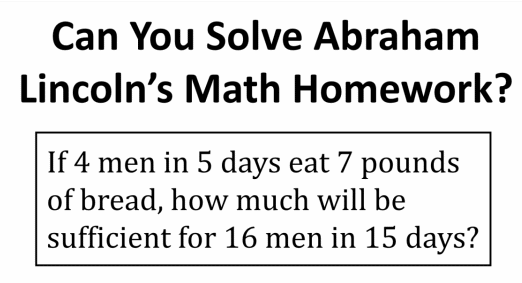 Abraham Lincoln was a very good math student. This video shares the story of why Lincoln studied Euclid's "Elements of Geometry." This mathematics problem he solved when he was about 16 years old, shows how he came up with the correct answer and thus the interworkings of his thought processes. We can deduce the steps he took from the somewhat mysterious calculations he noted in his manuscript and put the calculations into today's algebra equation.

Compiled by Dr. Neil Gale, Ph.D.
[1] Euclidean Geometry is a mathematical system attributed to Alexandrian Greek mathematician Euclid (sometimes called Euclid of Alexandria), the "father of geometry," who lived in the Greek city of Alexandria, Egypt around 300BC, where he founded a school of mathematics.

Euclid's method consists in assuming a small set of intuitively appealing axioms, and deducing many other propositions (theorems) from these, in his textbook on geometry: the Elements of Geometry. Since 1482, there have been more than a thousand editions of Euclid's Elements of Geometry printed.
Presented by Dr. Neil Gale, Ph.D. at 11/22/2020 11:04:00 AM