The Real Story of Minky's Bicycle Shops in Chicago.

Seymour (Shim) Nimerov (born in 1917) opened Minky's Hobby & Sports Store at 3330-32 West Roosevelt Road in 1938. Shim incorporated as "Seymour Nimerov & Company," but he did business (dba) as "Minky's Hobby & Sports Store."
Milton (Minky) Nimerov (born in 1915) was Shim's older brother and Shim thought the name 'Minky' was catchy and would be easily remembered. Besides bicycles, they sold sporting goods, hobby crafts, toys, and were a Lionel train dealer too.
Shim was the business owner, Minky took care of new bicycle assembly and mechanical repairs, and Charley Nimerov assisted Shim in the sales and management of the Roosevelt Road store.
Shim advertised to purchase stamps collections.
Shim opened a second store, Minky's Bicycles & Toy Store at 2834 West Devon Avenue around 1954.

Bicycles were shipped in boxes and assembled at the dealerships. Many bike shops around the country had their own head badges and would replace the manufacturers head badge with their own. 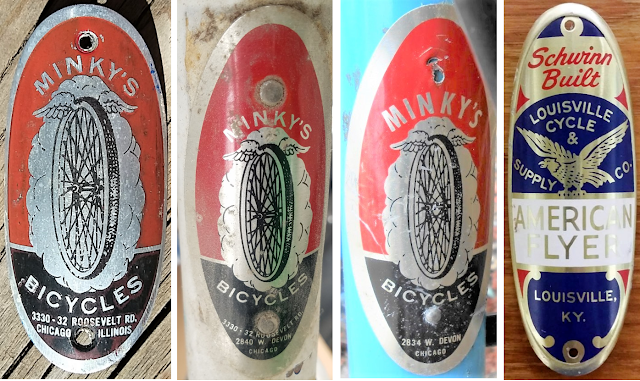 Minky's on Roosevelt Road was burned to the ground during the Chicago riots in 1968. On April 5, 1968, violence sparked because of the assassination of Martin Luther King, Jr., on the West side of Chicago, gradually expanding to consume a 28-block stretch of West Madison Street and leading to additional fire damage on Roosevelt Road. The riot was finally contained on April 7, 1968. 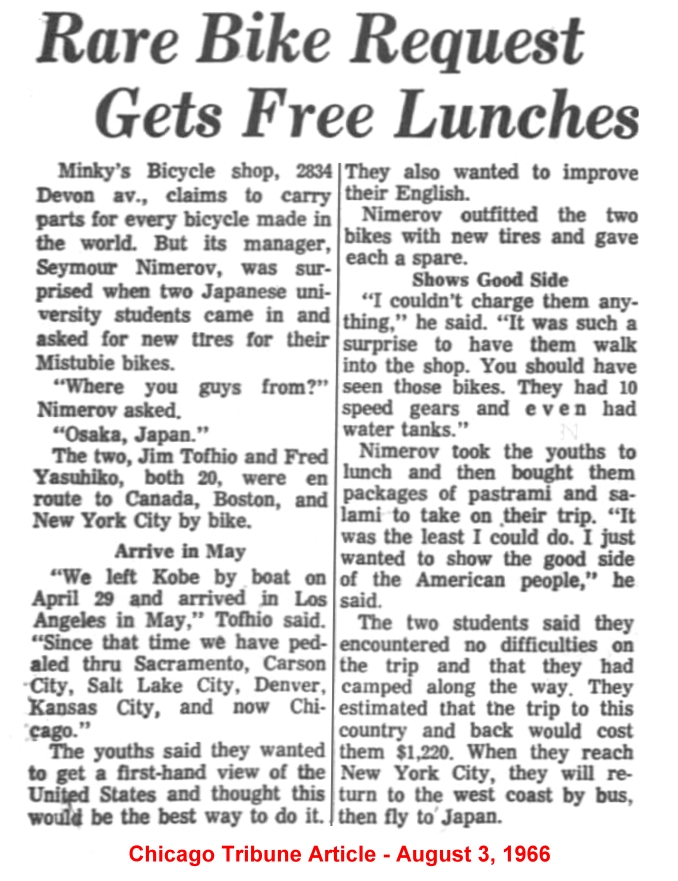 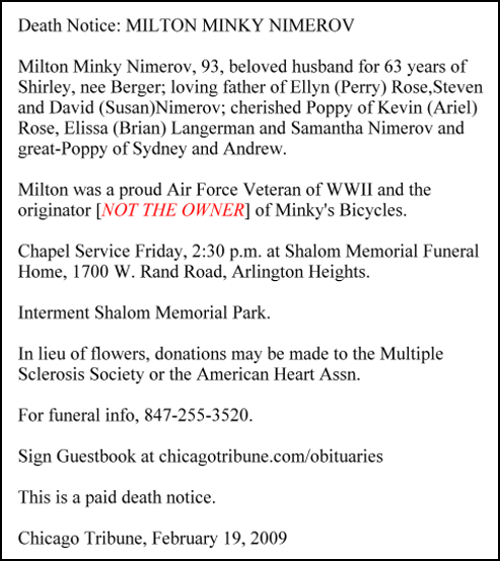 Milton Nimerov died 26 years after his brother Seymour. Wouldn't you think that if Minky really owned the Bicycle shop, it would have remained open for some time longer?

NOTE: Minky's son, David Nimerov has maliciously lied about his dad, Milton Nimerov, being the owner of Minky's and has done so for years, as he must have thought there was no proof of ownership still in existence. But after talking to some of Shim's family, I did a deep dive to find out the truth.

During my written conversations with David Nimerov, he made these statements to me: "My Dad Milton Minky Nimerov [was the owner]. Shim was his younger brother and the salesperson." "There’s a reason the stores were named Minky’s Bicycles." "If I recall, my dad did give Eve [Shim's wife] $3,000 to walk away."

I don't know why he felt it necessary to propagate these lies for so many years. Perhaps just to be spiteful towards Shim's family. In my book, David's claiming Minky was the owner is like a person claiming to have served in the military but never did. Unlike both Seymour and Milton who served in WWII. That's called "Stolen Valor!"

I ousted David to set the record straight. David is still lying and it's just plain wrong. It's hurtful to his own family too, which I have had personal contact with.

In Yiddish, David is called a Schmuck!

Seymour Nimerov's immediate family has read this article and condones this information in the above note I wrote.
Presented by Neil Gale, Ph.D. at 6:00 PM

All photographs displayed in the Digital Research Library of Illinois History Journal™ are the property of their respective owners, unless otherwise noted. These photographs have been collected from online sources which are considered to be in the public domain. If you are the copyright holder of a photograph in an article, please send me an email to LivingHistoryOfIllinois@yahoo.com with verification of your legal copyright and it shall be remove immediately.
The Digital Research Library of Illinois History Journal™ holds NO © COPYRIGHT claims to any articles text, unless otherwise claimed at the end of each article. Data is compiled from a multitude of online and conventional sources. Because this Blog is not-for-profit and is not academically funded, plagiarism is a non-issue. We do not sell these stories or photographs. I write compiled articles to hone my online research skills and provide public education and entertainment.