Attorney Oscar A. Brotman (1916-1994) movie theater chain owner (the Lincoln Village Theater was owned by Brotman-Sherman Theaters, Inc.), former ping-pong and swimming champion, brought his glitz and glamour vision of "Miami in Chicago" to the Hollywood Park neighborhood of the North Park community. Nothing remains of the Tower Cabana Club, but in its glory days, Brotman’s Tower Cabana Club was the swankiest spot around.
Setting the stage for fun in the sun.
In 1955, on a narrow, two-block strip of land, leased from the North Shore Sanitary Canal and overlooking the canal, a total of 6.75 acres east of Jersey Avenue on Peterson Avenue is where Brotman built his Tower Cabana Club.


NOTE: The McDonald's on the SE corner of Peterson and Jersey Avenues was next door to the Tower Cabana Club. It was the first McDonald's IN the city of Chicago (the first McDonald's in Illinois was in Des Plaines). It was opened by James E. Maros, and was an original red & white tiled, eat-out-side building, located at 3241 West Peterson Avenue. It opened in late 1955 and is still a McDonald's.

Brotman's family plan for "poolside living" was extensive, costing $300,000 in 1955 ($2,845,000 today). The club had a snack bar, a wading pool designed for the toddler set, day camp activities under competent instructors, and a playground area far enough away from the cabanas to ensure a little peace and quiet for parents. Outdoor dances were scheduled for summer evenings.

Other activities included the Aquacade show; water skiing in the pool, surfboard ballet, daredevil diving. Dancing for teens with entertainers like Ralph Marterie, Lola Dee, David Carroll, Eddy Howard, Nick Noble, the Crew Cuts, Len Dresslar, Georgia Gibbs, and many other famous people have performed at Tower Cabana Club over the years.
Brotman was warned about palm trees in Chicago's frigid cold winters, but he ignored the naysayers. He imported eight 35-foot-high coconut palms from Florida and had them planted in cement blocks and chemically treated to withstand cold temperatures. When the fronds turned brown and fell to the ground, Brotman had them spray-painted green and nailed back up where they belonged. Sometimes the leaves turned brown but didn’t fall off. “If they don’t fall off,” Brotman complained to a Chicago Tribune reporter, “how do they expect to get painted?”

A new device that is often helpful in teaching children to swim was called "swim trainer," which was an inflatable rubber bag that is strapped to the back and gives the learner confidence and helps keep him in position.
With 150 cabanas available for rent, Brotman offered families a plan for “poolside living” at a private club. Besides the full-size pool, there was a wading pool, the Decoma Day Camp, and a playground, far enough away from the cabanas to ensure a little peace and quiet for the adults.
The Chicago Tribune loved Tower Cabana; the neighbors? Not so much!
In August 1955, a two-page spread in the Tribune, “The Florida Idea of Fun Catching on in Chicago,” showcased the delights of the Tower Cabana Club.
But it wasn’t all sun and fun and beauty contests. The club fought city and neighborhood opposition throughout its existence. The first case, a battle with City Hall over whether Brotman could build a commercial project on land leased from the Sanitary District, went to the Illinois Supreme Court.

The city of Chicago argued they had zoned the land for single-family dwellings, but the judge ruled the city didn’t have the right to zone Sanitary District property. Not to mention the land was 50 feet west of a waterway used to drain sewage from North Shore suburbs into the city. Brotman won round one on January 30, 1955.
On April 21, 1955, the day after his inauguration as 40th Ward Alderman, Seymour Simon demonstrated a seasoned pro’s grasp of Chicago neighborhood politics. He asked the Department of Streets and Sanitation to barricade the Peterson Avenue driveways leading into the Tower Cabana Club’s newly paved parking lot. “I’m not trying to stop the project,” Alderman Simon explained to the Tribune. “I just don’t want to help.”

During the zoning battle, Hollywood North Park Civic Association (HPNCA) came into existence. Founded by Gerald Specter and other local residents for the purpose of blocking the construction of the club, HNPCA fought Brotman on several issues to preserve the neighborhood’s quiet character and its property values.

Cold weather brought more controversy.
In November 1955, Brotman came up with the idea of offering club members ice skating during the off-season. His was no ordinary flood the backyard plan; Brotman enlisted the engineers of the Burge Ice Machine Company to build an icy surface over the pool that would stay frozen even in 60° weather. The ice froze but outdoor lighting and piped music heated up the neighbors.
In October of 1956, the Tower Cabana Club forms the first curling club in Chicago in over 50 years. 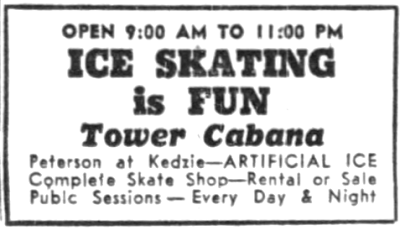 Brotman’s ingenuity as a set designer was once again evident in December 1956 with the transformation of the palm trees into 45-foot Christmas trees. “No one would ever guess,” Brotman told the Tribune, “that I had those eight evergreens hauled down from Michigan by special truck, lashed them as close as possible to the palm trunks and steadied them with guy wires.” 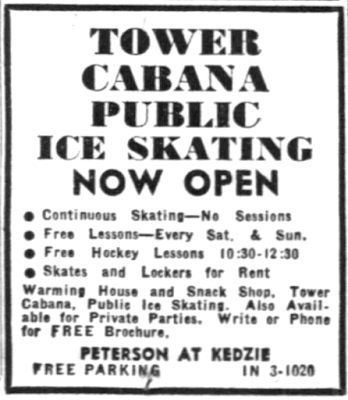 In March of 1957, Ald. Simon came to Tower Cabana Club again. He proposed an ordinance that prohibited ice skating rinks that operated after 9pm within 150 feet of homes. The proposal came after Simon claimed there were complaints by homeowners in the Jersey and Peterson area that "piped music, noise, and bright lights" from the Tower Cabana Club created a nuisance in the neighborhood. Brotman stated the ordinance also threatens some 122 rinks operated by the park district and the city. Also, threatened is the operation of outdoor theaters. Brotman pointed out that when the recreational facility was built in 1955, two years ago, there were only six homes on Jersey Avenue and since then some 40 homes have been built. "Most of the home owner's children, even Ald. Simon's, swim and skate at the club." Brotman argued. "I think Simon is misguided. A facility such as this should be encouraged."

Brotman won that round but lost the next one. His scheme to boost revenues by adding a golf driving range met with neighborhood disapproval. “A pool is one thing, but a golf range in a quiet area is ridiculous,” said Specter. “I don’t want to see neighbor's kids dodging golf balls.”

Specter and the HNPCA won the round of golf. The experience of challenging Brotman’s Tower Cabana Club served Specter well for a history-making battle nearly twenty years later.


In 1974, the city closed the Municipal Tuberculosis Sanitarium, also located in Hollywood Park. The first Mayor Daley wanted to give the land to developer Harry Chaddick, who had plans for a shopping mall and high-rise apartment buildings. Specter and others fought to preserve the land for public use.

Specter was a huge player in keeping the Tuberculosis site out of the hands of commercial developers. He fought the Daley machine and won. As a result of the North River Coalition, the land occupied by the Municipal Tuberculosis Sanitarium became Peterson Park and North Park Village.

The end of an era.
In 1966 Tower Cabana Club went out of business and its facilities quickly deteriorated, helped along by nature and vandals. HNPCA begged for its demolition and in 1968 the Sanitary District finally obliged. They then leased the site for a dollar a year to the Chicago Park District and to this day it remains a free and open space with a bike/walking path.