The Lincoln Village Theater was the last movie palace built in Chicago.

In August of 1968, Attorney Oscar A. Brotman (1916-1994) opened the 1,440-seat Lincoln Village Theater at 6101 North Lincoln Avenue, Chicago. It was located in the Lincoln Village Shopping Center at Lincoln Avenue and  McCormick Boulevard in Chicago, about two blocks upriver from Brotman’s shuttered and soon-to-be-demolished Tower Cabana Club (1955-1966) at Peterson and Jersey Avenues. 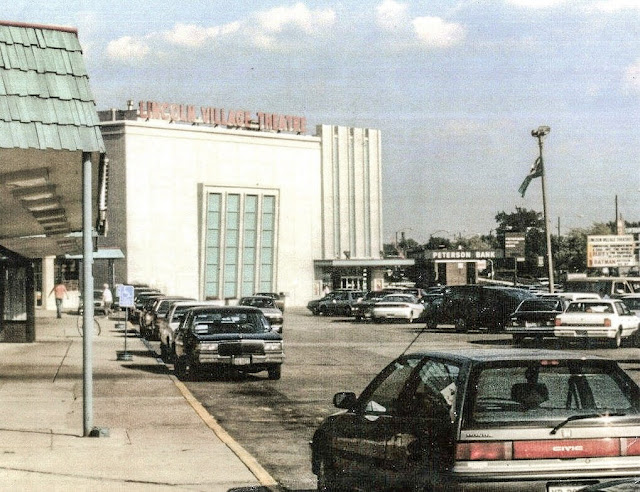 Brotman (President) had a partner, Leonard Sherman, and in 1968 Brotman & Sherman Theaters, Inc. (Brotman also owned: South Shore Amusements, Inc.) owned 14 Chicago area movie theaters, making it one of the largest local chains.
Reminiscent of Miami Beach Art Deco style, as was his Tower Cabana Club, the theater’s brilliant white façade sparkled in the sunlight. Tall red neon cursive lettering atop the roof gave the building more height and retro flair. A man recalls being able to see Lincoln Village Theater from the Church Street bridge over the North Shore Sanitary Channel, a distance of several miles. It was the last single-screen movie house of this size built in Chicago, the last attempt at bringing 1920s-era glamour to the movie-going experience.

Lincoln Village Theater was just like some old-school, fabulous downtown Chicago theaters at a time when downtown was beginning to lose theaters. The lobby was expansive and luxurious, lit by dramatic wall sconces and a working fireplace. There was a sunken seating area and fancy restrooms. A place to see and be seen.

Inside the theatre, extra-wide aisles led to extra-cushy seats. A wood-paneled balcony structure rose off the main floor. Thanks to stadium-style seating, there wasn’t a bad seat in the house.

It took nearly five minutes to move the gold fabric, both horizontally and vertically, floor-to-ceiling curtains, accentuating the glamour of the old-time live stage shows. You knew something big was about to happen.

No expense was spared on technical specs, either. The theater was equipped with Cine-Focus 35mm and 70mm projection, a ‘Scope screen, and a full six-channel stereophonic sound.
The opening movie was 'No Way to Treat a Lady.' The same year brought 'Green Berets,' 'Rosemary’s Baby,' 'The Producers,' and 'How Sweet It Is,' to the theater.

Lincoln Village Theatre was booked for a variety of acts as well as movies. In December 1968, Chicago’s Royal European Marionette Theatre settled in for a weeklong run of its 'Wizard of Oz' play. The Brothers Zim Revue played for two nights. The Barry Sisters, four nights only. Mickey Katz, “America’s favorite Yiddish comedian,” played the Lincoln Village, as did Larry Best and Eileen Brennan. The live, closed-circuit telecast of the 1970 Cassius Clay-Jerry Quarry fight, one-half of the 'Double Dynamite' package, sold out in 45 minutes at $7.50 a seat ($58.00 today).
SIDEBAR:

The 20-Minute Rule as it relates to film viewership, not just film criticism. Is 20 minutes enough time to consider a movie fully? When this topic came up, Roger Ebert often cited “Brotman’s Law,” named after Chicago movie exhibitor Oscar Brotman, which declared that “If nothing has happened by the end of the first reel, nothing is going to happen.” A reel of film is 1,000 feet, and about ten minutes when projected, but most movies are projected two reels at a time, which means “the first reel” is about 20 minutes — hence, another variation on The 20-Minute Rule.

Temple Beth-El, the former West Rogers Park Jewish congregation that outgrew its Touhy and Kedzie Avenue building, rented the theater for the Jewish High Holidays at the movie theater. In 1981, Temple Beth Israel (purchased land in Skokie at Howard and Crawford in May 1961) held its High Holiday services at the Lincoln Village movie theatre. Portable lighting was brought in to brighten the theater for services.

Under new ownership, the Lincoln Village Theater was partitioned into three oddly shaped boxes, then the building was razed around 2000. Now the site is new construction and is a Ross Dress For Less Store.