Ancient Illinois history beginning on the supercontinent of Pangaea.

We will follow the land that makes up modern Illinois, beginning from the Mesozoic era (250 to 65 million years ago - the Age of Dinosaurs). 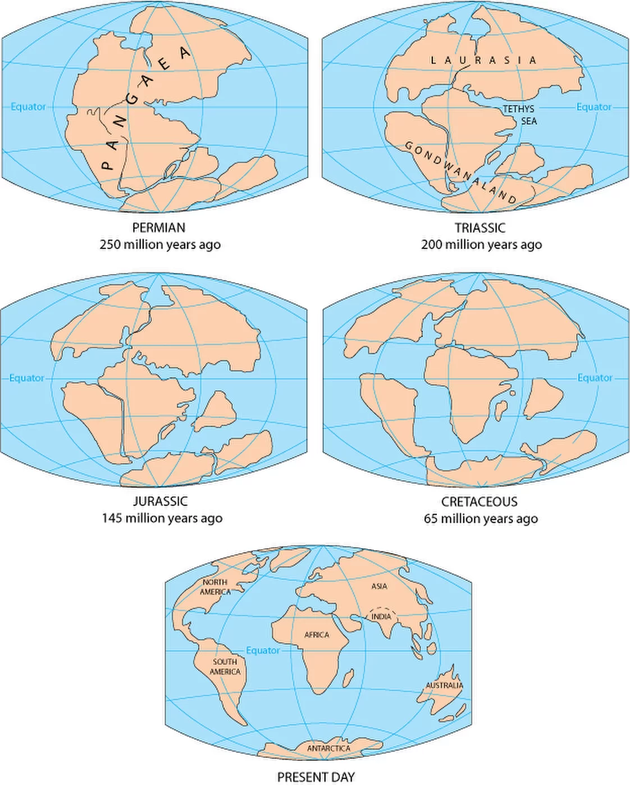 In fact, today's Illinois was south of Earth's equator twice! During these times, it was covered with tropical forests, which over the millennia formed coal deposits. Some of the Mazon Creek fossils discovered in Illinois are found nowhere else in the world, like the "Tully Monster."
Some ancient life represented is ferns, insects, shrimp, jellyfish, and fish scales - fossilized in rock 310,000,000 to 200,000,000 million years ago before continents moved together to form Pangaea in the Paleozoic era.

From Pangaea to the Modern Continents.

Over 260,000,000 million years ago, a shallow ocean covered the area, forming layers of limestone from the calcium carbonate shells of abundant snails, clams, and other sea life. The local laminar limestone deposits can easily find fossils of trilobites, mollusks, sponges, corals, and crinoids. Shark teeth and starfish have also been discovered here. An amateur paleontologist from Eyler, just east of Pontiac, found two new fossil crinoid species in Wagner Quarry south of Pontiac. Her husband, also a crinoid expert, named one of the new species pontiacensis, and the other Christine, after his wife.

There was a mile-high block of ice through the Ice Age atop the landscape. When it melted, Lake Ancona formed in where is now east-central Illinois with a clean sand bottom. It eventually drained, and many smaller lakes were formed. As the climate became drier, Ice Age megafauna moved in. Local finds of wooly mammoth tusks and teeth, along with a 50-pound copper nugget transplanted by the ice from the Mesabi Range iron ore area of northern Minnesota. Buffalo (American Bison) covered the area during the Pleistocene Era (aka the Ice Age - 2.6 million to 11,700 years ago), and again 500 to 300 years ago, only to finally disappear in the early 1800s.

Bison bones were found along the area's banks of the Vermilion River in 2011. They were only the third discovery of bison bones east of the Mississippi River from the Holocene Era (12,000 years ago to the present day), indicating only sparse, intermittent perhaps, distribution of the bison in this area then. The other two Holocene discoveries were near Ottawa in a silica quarry and Mapleton, 12 miles downstream from Peoria, where the mouth of a tributary stream emptied bison carcasses into the Illinois River.

About 14,000 years ago, the first humans (the original indigenous people) arrived. Only a few of their early spear points (Clovis points) have been found in Illinois, which were lost in hunting these large game mammals. The Archaic Period peoples (8,000 BC to 1,000 BC) were wandering hunter groups following the game. Living in small groups, they roamed in search of food, camping for several days to several weeks, and then moving on. They produced spearheads commonly found along rivers, creeks, and out on the prairie. These artifacts we see today were made from flint and chert, a form of metamorphosed limestone, deposits of which are rare in this area. Some of their weapons and tools also include copper spear points from the Old Copper Culture (4000 BC to 1000 BC). A 6-inch copper point was found in Dwight, Illinois. The Archaic people found rare copper nuggets dropped here by retreating glaciers they hammered out into tools and weapons.

One of the most unique tools from this period is called “banner stones.” These pieces of stone were of varied shapes with a longitudinal hole drilled in the center. They were slid onto a throwing stick, called an Atlatl (an Indian word meaning: spear-thrower). This extra weight and the extended leverage of the throwing stick enabled a hunter to throw a spear at a much higher speed, thus improving the chance of bringing down their prey.

The Woodland Period (1000 BC to 1000 AD) saw more advanced cultures of settled groups in villages with gardens of sunflowers, squash, pumpkins, and beans to supplement hunting for game. Trade routes to Florida, Michigan, North Dakota, and other far-flung states were established for obtaining scarce items such as suitable stone for tools and weapons, copper for axes, and mica from Carolina for mixing with clay for stronger pottery. Workable stone from neighboring states like Indiana, obsidian (lava glass) from Wyoming, and copper from Minnesota and Wisconsin are evidence of that trading in Illinois. About 3,000 years ago, pottery first appeared in North America. That crude early pottery has been found here. Other finds include bear teeth and elk antlers — both species have disappeared from the area long ago.

John McGregor, a Pontiac native who became the Director of the Illinois State Museum, found a blade that he determined was made by the same person who made the Mackinaw Cache blades found in Tazewell County, a group of blades widely recognized as the finest examples of “chipped” stone ever found in North America. He was involved in many of the early archaeological efforts in the state. He directed the Washburn, Illinois, excavation of a mass burial near a creek that contained four pits with approximately 200 individuals each!
The Mississippian Period (800 AD to 1600 AD) saw a higher level of culture develop in North America. Instead of isolated sustenance gardeners and gatherers, maize (corn) was more widely introduced, planted in larger tracts, and still remains today as the dominant driver of our county’s culture and economy. Two flint hoes 11 inches long were found at two different locations along Rooks Creek, as well as a cache of 26 hoes south of Pontiac. Simpler hoes from this time are found throughout the area. The use of these hoes marked the beginning of agriculture as we know it today.
sidebar

Mississippian Period "Flint Hoe" — This flaked chert hoe head commonly shows use and wear along the bit edge. They were used for gardening or construction activities. This tool was widely used throughout the midwest and the southeastern United States. They typically range in size from 3 to 12 inches long.


The Mississippian people began using corn as their main community resource rather than just another private family garden staple. Cahokia points are found here, named after the Cahokia Mounds complex near Collinsville, which contains the largest prehistoric earthen structure in the Americas; Monk’s Mound. Larger at its base than Egypt’s Great Pyramid, Monk‘s Mound was the home of the Chief of what was at the time the largest city in the Americas.
A copper falcon headdress piece was found at the mouth of the Vermilion River near Ottawa. Area peoples used the river as their highway for trade and cultural exchanges. A smoking pipe in the shape of a fish head and one of a bird’s head are examples of other Illinois artifacts from this time period.

Nearly all the information we have of the prehistoric native human inhabitants of the area comes from discoveries of what they left behind; burials, tools, and weapons buried in campsites and villages, and earthen works like Monk’s Mound in Cahokia. Burial mounds were common all over the state of Illinois, mostly by rivers, streams, and other bodies of water.

Most mounds in Illinois are gone now, succumbed to tilling the soil for farming, treasure hunters and looters. In the early twentieth century, a banker named Payne from Springfield excavated the Billet Road mounds and stripped them of all their manmade items; now lost history. A mound north of Fairbury along the river was excavated while digging a basement for a house. It contained one individual and burial goods.

Unlike their counterparts who moved south to settle in Central and South America. North American indigenous people produced no written language. Other than petroglyphs, or picture art (example 1 - example 2), that depicted events, surreal imagery, and early art, no translatable written record was left to us. Names of individuals, their tribal names, battles, migrations, food issues, and weather; none of this information is known first-hand. Not until the onset of European migration westward from the east coast and southwest from New France (Canada) did any historical records begin appearing to gain insight into the first 12,000 years of human history in Illinois.

THE SUPERCONTINENT OF PANGAEA 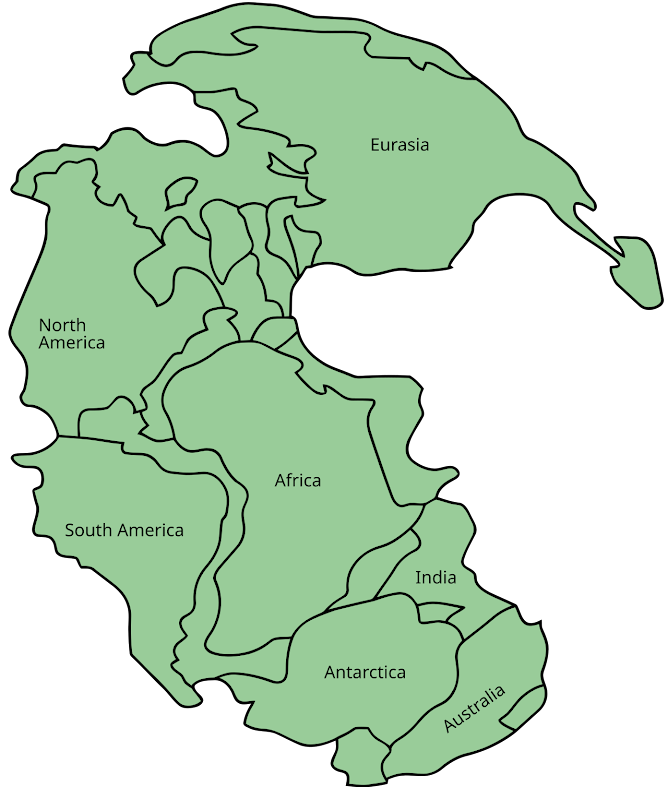