Since 1955, when amateur fossil hunter Francis Tully discovered an unlikely prehistoric creature in a coal mining area near Morris, Illinois, 55 miles south-west of Chicago, the 'thing' that was named Tullimonstrum (Tully monster) has presented one of the great puzzles in paleontology.

A Tully Monster in Motion.

Much as the people of Metropolis wondered whether Superman flying overhead was a bird or a plane. Scientists have struggled to classify these fossils that showed traits associated with several disparate animal types and such abnormalities as eyes mounted on an external bar and a long, toothy proboscis.

If you put a worm, a mollusk (snails, slugs, mussels, and octopuses), an arthropod (insects, spiders), and a fish, in a box and shook it up, then you'd have a Tully monster, in the end. Paraphrased from Carmen Soriano, a paleontologist at Argonne National Laboratory.
The Tully's renown even stretched to the Illinois state legislature, which named it the official state fossil in 1989, some 308 million years after it inhabited the shallow salty waters that turned into Illinois' Mazon Creek geological deposits, in Grundy County, one of the richest fossil troves on Earth.

NOTE: About 540 million years ago, between the Gondwana and the Laurasia supercontinent[1] periods, when the Earth was about 4 billion years old, Illinois was south of the equator for the second time.

Illinois was part of a low-lying basin covered by a shallow, warm tropical sea. As land masses shifted over time, this saltwater became trapped in aquifers that still exist underground today.

Now, though, Tullimonstrum gregarium has a home on the Tree of Life rather than in the biological category known as the "problematica." Utilizing the synchrotron X-ray machine at Argonne and the Field Museum's collection of 2,000 Tully specimens, a team from those two institutions, Yale University and the American Museum of Natural History announced in a paper published in the journal "Nature" on March 16, 2016, that "The Tully monster is a vertebrate." 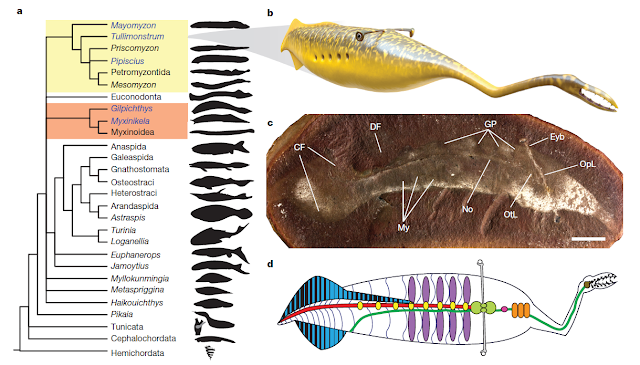 Morphology and Phylogeny of Tullimonstrum.
CLICK FOR FULL-SIZE VIEW.

Below that headline, the paper describes Tully as belonging "on the stem lineage to Lampreys (an ancient extant lineage of jawless fish)," a find that "resolves the nature of a soft-bodied fossil which has been debated for more than 50 years."

"This is one of the mysteries that I heard about since I was a kid," said Soriano. "To be able to study, to basically 'unmonsterize' the monster, is really exciting."

"Resolving this is a big deal," said Scott Lidgard, the Field Museum's associate curator of fossil invertebrates and another of the paper's authors. "It's one of the examples used in textbooks around the world as what is called 'problematica,' " creatures that defied ready classification and were sometimes thought to be examples of extinct phyla, or animal categories.

"This is kind of a poster child for that sort of evolutionary puzzle," Lidgard said. The finding "changes it from a mystery to a fishlike organism that is probably on the lineage leading to what we would recognize as lampreys."
It's also a big moment for those who study lesser prehistoric animals and realize, said Lidgard, that "we're never going to be as popular as dinosaurs and fossil birds."

The Tully monster is named for its assemblage of features, not for any sort of fearsome size. The biggest of the many, many specimens that have been found suggested a maximum length of about 18 inches and a typical length of 12 inches.

But because Mazon Creek fossils are so well preserved, there is a lot of Tully to study. Skeletons have not survived, but detailed impressions in stone have.

"If you see the specimens, they are typically well preserved," Soriano said. "It's not that they are a blob in the rock."

Tully, a pipefitter for Texaco and lifelong fossil hound, described his find to the Tribune in a story in 1987, also the year of his death:

"I found two rocks that had cracked open from natural weathering. They held something completely different. I knew right away. I'd never seen anything like it. None of the books had it. I'd never seen it in museums or at rock clubs. So I brought it to Chicago to the Field Museum to see if they could figure out what the devil it was."
The first scientific paper describing the Tully monster, and giving it its vivid Latin name, came in the mid-1960s from one of Lidgard's predecessors at the museum, who "thought it was a worm," Lidgard said.

Later papers proposed that it was a "free-swimming shell-less snail," he said, and then a conodont, extinct eel-like creatures very rare in the fossil record.

"I've been looking at this thing for 30 years," said Lidgard. "Years ago I had a stab at it, thinking it might be related to squids. We gave up. We didn't publish anything."

What got the ball rolling again was Lidgard hearing about Victoria McCoy, a Yale grad student exploring the Mazon Creek deposits who would become the paper's lead author.

They met at a 2014 conference, and the following year, an assembled team spent three weeks at the Field Museum studying its Tully specimens.

The Department of Energy's Argonne National Laboratory, southwest of Chicago, came into the picture because of its advanced imaging techniques using the Advanced Photon Source, an electron accelerator and storage ring that "provides ultra-bright, high-energy storage ring-generated x-ray beams for research in almost all scientific disciplines," according to Argonne.

"The thing with these machines is they are incredibly powerful microscopes," Soriano said. "We can get information not only on the morphology of the sample but also on the structure, on the composition."

It allows people "to see what no one saw before basically," she said.

What the scientists saw, as they studied the Argonne imagery, digital photographs of the fossils, and the fossils themselves were characteristics that tied the Tully monster to lampreys.

A chemical analysis of the eyestalks, for instance, showed the presence of zinc, "very similar to the material in the eyes of vertebrate fossil fishes," said Lidgard.

"Tully is usually preserved so that you're looking down on its back," he added. "Every so often you can see its side. In those twisted fossils we found a very few where we think we can distinguish openings we interpret as openings to a particular kind of gill structure present in very primitive fishes like lampreys."

And they were able to find the animal's gut trace, as well, the shadow of its digestive system, in the lower part of the body, which suggested that what had previously been thought to be a gut trace up on the back was, in fact, a notochord, a flexible rod in the back.

That made it a primitive vertebrate, he said. He does not recall a moment where somebody said, "Hey, lamprey!", but recalls that "it became more and more clear," he said. "As those results started to come in, it was pretty convincing right away."

So if the Tully monster is now a known vertebrate lamprey ancestor with a place in the historical animal record, that raises two big questions:

First, do all those specimens at the Field Museum move out of the invertebrate department?

Paul Mayer, collections manager of invertebrate fossils, laughed. "I've been talking with the vertebrate fossil collection manager," he said. "We're going to wait a couple of years and make sure there's no rebuttal. It's a lot of work to move these things up the stairs to where his collection is."

Question two: Does the Tully monster need to be renamed?

"No, because it's still a monster," said Soriano. "It's something really different from anything we have seen. It's one of a kind. If you come back to this idea of a monster as anything strange, it's still strange."
ADDITIONAL READING: Prehistoric Saltwater Shark Nursery Fossils Found in Illinois.

The Tully monster was a soft-bodied, invertebrate, and found only in Illinois and is the official Illinois state fossil. Look how cute he is! 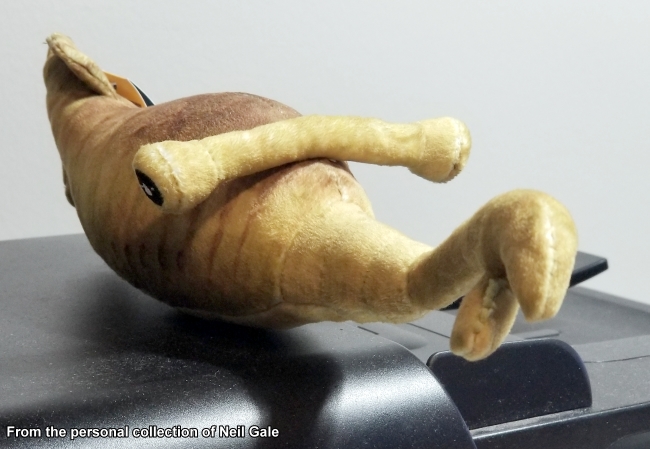 You can own your own cute 12" soft-bodied Tully monster plushy from Paleozoic Pals. 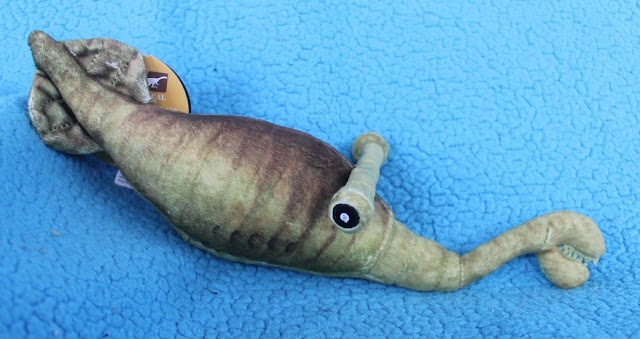