Dan Goodwin "Spiderman" scaled the outside of the John Hancock Building and the Sears Tower in 1981.

Dan Goodwin's Interest in climbing buildings.
On November 21, 1980, Dan Goodwin witnessed the MGM Grand fire in Las Vegas, Nevada, United States, including the inability of the Clark County Fire Department and the supporting fire departments to rescue scores of hotel guests trapped inside. Believing he knew how to rescue the trapped people, Goodwin presented a rescue plan to the on-location fire boss. Goodwin's plan included his climbing up the building and connecting cables to the floors to enable rescue baskets to be ferried to and from helicopters. The fire boss responded by threatening Goodwin with arrest and then ordered him escorted from the scene. The following day, Goodwin approached the fire chief of a Fire Department sub-station and presented his rescue plan. The fire chief told Goodwin he needed to climb a building to learn of the dangers of high-rise firefighting and rescue. The following Memorial Day, Goodwin scaled the outside of the Sears Tower in Chicago (renamed as "Willis Tower" in 2009), which at the time was the tallest building in the world. 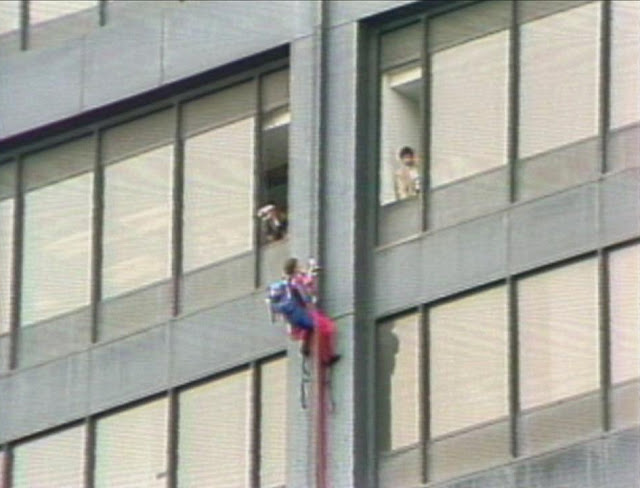 For seven hours Goodwin fought the high altitude winds, slippery glass, and repeated attempts by the Chicago Fire Department to stop him. A few feet below the top Goodwin taped an American flag to the building to honor his father who fought in the Korean War. Chicago’s press dubbed him "SpiderDan." Goodwin stated the reason he scaled the building was to call attention to inadequacies in high-rise firefighting and rescue.

John Hancock Center, Chicago, Illinois.
On Veterans Day, November 11, 1981, wearing a wetsuit disguised as a Spiderman suit and using a climbing device he designed for the building, Goodwin scaled the 100-story John Hancock Center in Chicago.
To elude firemen who were descending toward him in a window-washing machine, Goodwin swung across the building with a rope. The fire department, on the inside of the building, used fire axes to shatter window glass near Goodwin and then through the openings in the glass attempted to dislodge Goodwin from the building with grappling hooks attached to long poles.

On a chilly Veterans Day of Nov. 11, 1981, Dan Goodwin was clinging by a homemade hook to an I-beam outside the 37th floor of the Hancock Center when then-Fire Commissioner William Blair gave the controversial order for firefighters on a higher floor to let loose a fire hose on him. 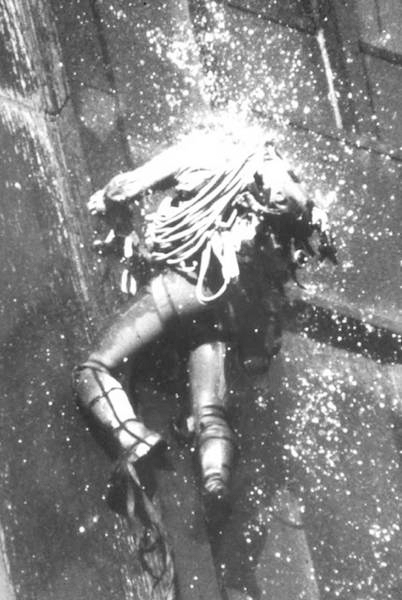 "They tried to kill me," says Goodwin, who leaned to one side and then the other to keep the force of the cold water from blasting him off the side of the building. "I felt at any moment I could die, and that brought out the warrior in me."

Equally determined not to let Goodwin, who had climbed the world's tallest building (now known as the Willis Tower) on Memorial Day, make it to the top of another Chicago building, the fire department tried to block his path with long poles and even smashed windows in an attempt to grab him.

"It was very intimidating to see the ax come through the window," says Goodwin, who will turn 59 on Friday and expects to be a grandfather next year.

Realizing the danger and the liability for the city, then-Police Superintendent Richard J. Brzeczek took command of the scene, called off the firefighters, and threatened to tow the firetrucks. He read a court order prohibiting Goodwin from finishing the climb.

With a mob gathered on the street below cheering, "Let him go! Let him go!" and TV stations recording the spectacle, then-Mayor Jane Byrne intervened, she took an elevator to the 38th floor and leaned out a broken window to see Goodwin perched below her "like a little bird."

"I never heard of her, so when this woman sticks her head out the window, she had to introduce herself," Goodwin recalls. Byrne clearly wasn't happy with him, "but she was compassionate," Goodwin says. "The rest of the climb went really well. I was just cold."

Goodwin said he made the climb to call attention to the inability to successfully fight fires in high-rise buildings.