Bill's Drive-In is located at 120 Asbury Avenue (Asbury is Western Avenue on the Chicago side of Howard Street) in Evanston, Illinois. 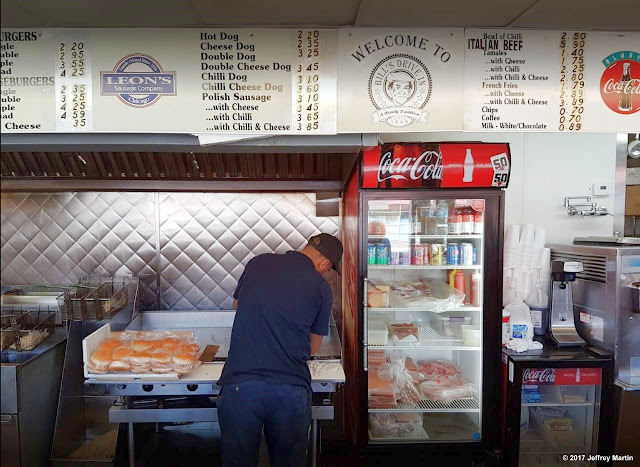 They have been dishing out hot dogs, hamburgers, and polish sausage for over 50 years. The double cheeseburgers are old school and really worth the trip. It is not a gourmet hamburger, but it is 5-stars in my book.
Bill's only used to serve small bags of chips, but in the late 1980s or early '90s, they began serving really good french fries, old-school style, in a brown paper bag.
There is a small counter, standing only, to eat at along the front windows, but the line to order food and the people waiting for their orders have no other place to stand but in front of the counter.
In nice weather, many people eat at picnic tables that are in the parking lot, just behind the building. Most others will eat in their parked cars.
Bill's Drive-In has been for sale since February 2021 for $600,000. There are new owners, who have left things just as they were for decades.
INDEX TO MY ILLINOIS AND CHICAGO FOOD & RESTAURANT ARTICLES.