The story behind John T. McCutcheon's 1907 "Injun Summer" article in the Chicago Tribune. 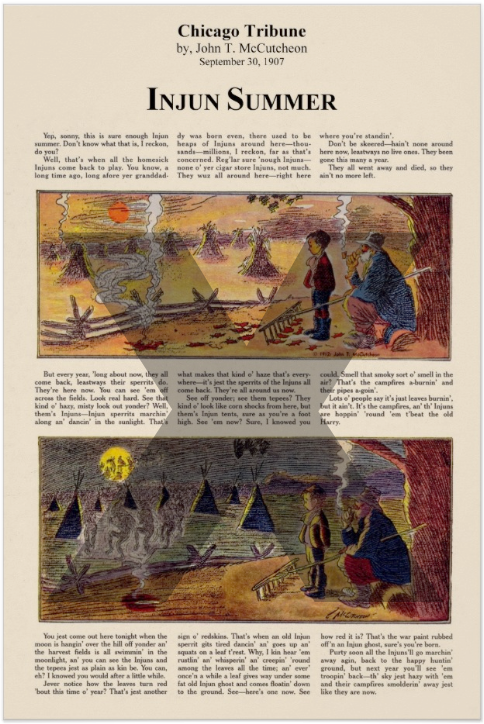 INJUN SUMMER by John T. McCutcheon. Chicago Tribune, September 30, 1907 and reprinted yearly, starting in 1912, until it appeared for its last yearly printing in the Chicago Tribune on Oct. 25, 1992.

Visit our Souvenir Shop
FIVE STANDARD SIZES TO 40 x 60"
One day in the early fall of 1907, cartoonist John T. McCutcheon found himself groping for inspiration for a drawing to fill his accustomed spot on the front page of the Tribune.

He thought back to his boyhood in the 1870s in the lonely cornfields of Indiana. "There was, in fact, little on my young horizon in the mid-1870s beyond corn and Indian traditions," he recalled later. "It required only a small effort of the imagination to see spears and tossing feathers in the tasseled stalks, tepees through the smoky haze..."

That "small effort of imagination" became McCutcheon's classic drawing "Injun Summer," which was first published on this date. It was accompanied by a lengthy discourse with the plain-spoken charm of Mark Twain. McCutcheon's astute folk poetry captured the enigmatic mood of nature's most puzzling season.


THIS CLASSIC CARTOON HAD A LIFE OF ITS OWN.
NOSTALGIC TO SOME, INSENSITIVE TO OTHERS.
By Stephan Benzkofer, Chicago Tribune; October 16, 2011.

"Injun Summer," an earlier era's celebration of autumn and childhood imagination, took on a life of its own — almost literally.

The famous cartoon first appeared on Sept. 30, 1907, on Page One, the answer to a looming deadline on a slow news day. John T. McCutcheon, inspired by a string of beautiful, warm autumn days and remembering his youth in Indiana, conjured up the illustration that became one of the most popular features in Tribune history.

As early as 1919, the "famous" cartoon had become a "much-loved" annual event, the Tribune said in promoting a high-quality print — "ready for framing" — that the newspaper included in an upcoming Sunday edition.

The cartoon wouldn't be contained to its annual appearance on newsprint.

The Indiana State Fair reproduced it as a feature exhibit in 1928. At the Century of Progress World's Fair in 1933-34, it was a life-size diorama and was reproduced in a fireworks display.

In 1920, the Indiana Society of Chicago presented a dramatized version of the work to honor McCutcheon. His son, John Jr., a future Tribune editorial page editor, played the boy. Neighborhood, school, and social groups acted out "Injun Summer" scores of times, as recently as 1977. One of the biggest dramatizations involved 1,100 children performing it at Soldier Field in August 1941 as part of the Tribune-sponsored Chicagoland Music Festival. A very popular display with mannequins appeared yearly at the Olson Rug Company's Memorial Park and Waterfall on Chicago's Northwest Side. McCutcheon's original black-and-white drawing is in the collection of the Chicago History Museum.

Over time the cartoon came to evoke anger as well as nostalgia. As early as 1970, readers wrote letters complaining that the Tribune was running an ethnically insensitive feature that misrepresented the brutal reality of Native American history in the United States in the 18th and 19th centuries. Letter writers also were unhappy with the idea that "they ain't no more left," pointing out that Indians still lived and worked in Chicago.

In the 1990s, Tribune editors decided to end the annual tradition. Douglas Kneeland, the Tribune's public editor at the time, said, "Injun Summer is out of joint with its times. It is literally a museum piece, a relic of another age. The farther we get from 1907, the less meaning it has for the current generation."

Still, the cartoon has a powerful hold over many Chicagoans. For generations of readers, "Injun Summer," despite its flaws, became synonymous with the magic and peacefulness of those last warm days of the season.
Presented by Dr. Neil Gale, Ph.D. at 10/01/2017 12:01:00 AM