Luna Park occupied the site of a former picnic grove owned by Joseph Oswald and commonly known as Oswald's Grove. In 1906, a group of investors, led by boxing promoter James "Big Jim" O'Leary (son of Mrs. O'Leary of Great Chicago Fire fame), announced plans to convert the ten-acre picnic grove into an amusement park. Big Jim promised the park would be a strictly legitimate business. Construction began in the fall of 1906 and the park opened the following year.

Luna Park originally started as a trolley park [1], which was smaller than most of the other Chicago amusement parks of that era; most notably Riverview Park (the largest amusement park in existence at that time.) and White City. Jim O'Leary became the park's manager in 1908.

Attractions included a midway with a small roller coaster,  a merry-go-round and other mechanical rides, a ballroom, a roller skating rink, live entertainment which included Vaudeville and Boxing matches, a restaurant, numerous games of chance, and souvenir stands. 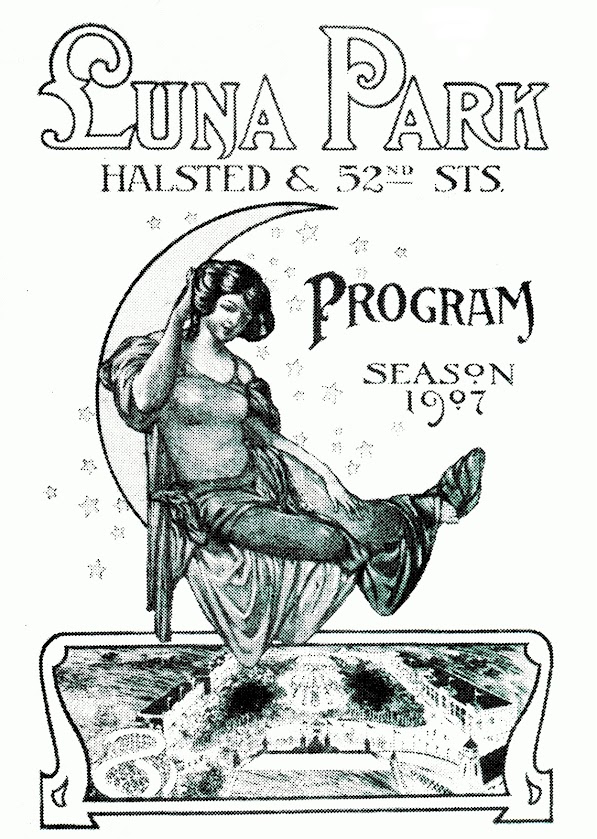 Initially popular (averaging 5,000 patrons a day in its peak), attendance declined in light of the increasing competition from other Chicago-area amusement parks.
In July of 1910, management temporarily closed the park in response to dwindling attendance. After Big Jim made a fortune in the 1910 Jack Johnson vs. Jim Jeffries championship fight, the park was reopened in 1911 as O'Leary attempted to find a buyer to no avail.

Luna Park's proximity to the Union Stock Yards and the smell that arose from the yards, especially on hot summer days, may have quickened its demise.

In 1912, most of the attractions were removed; the remaining structures were converted into a large food market hall. In 1916, the grounds were sold to real estate developer James H. Milligan to focus on building single-family houses.

[1] Trolley parks, which started in the 19th century, were picnic and recreation areas along or at the ends of streetcar lines in most of the larger cities. These were precursors to amusement parks. These trolley parks were created by the streetcar companies to give people a reason to use their services on weekends.