Mary Todd and Robert Lincoln - In the Midst of the Great Chicago Fire, 1871.

After John Wilkes Booth shot President Lincoln on April 14, 1865, at Ford's Theatre in Washington, D.C., and his passing on Saturday, April 15, 1865, Mary Lincoln departed Washington by train to Chicago with her son Thomas 'Tad.' They moved into the Tremont House [Hotel].
Later, Mary and Tad moved into the Hyde Park Hotel with Robert Todd Lincoln. Robert moved into his own residence by the end of 1865 at 653 South Wabash Avenue (today's address on the 1200 block of South Wabash Avenue), Chicago. 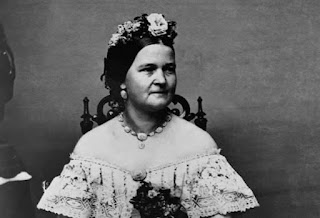 In May of 1867, Mary rented out her house and they moved into the Clifton House Hotel at the southeast corner of Wabash and Madison.

Later that year, they moved back to her old neighborhood and lived at 460 West Washington (today's address is 1407 West Washington Boulevard), across the street from Union Park at Ogden Avenue.

Again in 1868, Mary and Tad moved back to the Clifton House Hotel.

Mary Lincoln and Tad, then 15 years old, took a trip to Europe departing Baltimore aboard the steamer "City of Baltimore" on October 1, 1868. The ship arrived at Southampton, England on October 15th. Two weeks later Mary and Tad arrived in Bremen, Germany, and from there they traveled to Frankfurt. Mother and son lived in the Hotel d'Angleterre (five-star accommodations) which was located in the center of the town.
While in Frankfurt Tad attended school and boarded at Dr. Johann Heinrich Hohagen's Institute. For a time Mary moved to Nice, but she returned to Frankfurt. This time she avoided the expensive Hotel d'Angleterre and stayed in the more modest Hotel de Holland and was more frugal in her spending habits.

In the summer of 1869, Mary and Tad spent seven weeks touring Scotland during Tad's vacation from Dr. Hohagen's school. They traveled from one end of Scotland to the other, exploring Edinburgh, Glasgow, and the Highlands near Balmoral.

They returned to the United States in May of 1871. The return trip, from Liverpool to New York, was made aboard the "Russia," which held the transatlantic record of 8 days and 25 minutes for the Liverpool to New York run, but Mary's trip took a couple of days longer because of poor weather.

On May 11th Mary and Tad arrived in port, and on May 15th they left for Chicago. It seems Tad had caught a cold during the ocean voyage and was not well when he arrived in Chicago. By late May Tad developed difficulty in breathing when lying down and had to sleep sitting up in a chair. By early June he was dangerously ill. He then rallied for a short time. As July approached he weakened again. Tad's pain and agony worsened as his face grew thinner. On Saturday morning, July 15, 1871, Tad passed away at the age of 18. The cause of death was most likely tuberculosis.

Tad's death occurred in the Clifton House Hotel in Chicago. Thomas Lincoln was buried at the Lincoln Monument in Oak Ridge Cemetery at 1500 Monument Avenue in Springfield, Illinois.

Mary was staying at Robert's house on Wabash Avenue after Tad's death when on October 8, 1871, the Great Chicago Fire started behind the O'Leary house at 137 DeKoven Street (today's address is 558 West DeKoven Street) in their barn. Believe it or not, the O'Leary house escaped the fire, untouched, and I have the photograph to prove it.

Robert's house was just one block south and two blocks east of the burnt area. Robert and Mary were home when the fire started. Robert quickly ran out to try to get to his law office located at 154 Lake Street in the Marine Bank Building on the northeast corner of Lake and LaSalle, to save what he could. But when he managed to get there, the building was already burnt to the ground. Lost forever was some of his father's letters and other keepsakes.

In 1874 Mary was living at the new Grand Central Hotel on LaSalle, Street. On April 6, 1874, she sold her old house on Washington Street.

Just 10 years after Lincoln's assassination, his widow, Mary, was charged with insanity and put on trial in Chicago. The accuser was her only surviving son, Robert Lincoln. The trial was held on May 19, 1875, and she had received no prior warning or chance to organize a defense. The jury deliberated for only 10 minutes, then she was institutionalized at Bellevue Place Asylum [1] in Batavia, Illinois. Mary was released in less than 4 months but mother and son never reconciled.

NOTE: All Chicago addresses in this story are before the 1909 & 1911 Chicago street renaming and renumbering to today's standard.

In 1854, while the Lincoln family lived in Springfield, this building was constructed of Batavia limestone at a cost of $20,000. It first housed a private academy called the Batavia Institute. By 1867 it became Bellevue Place, a rest home and sanitarium run by Dr. Richard J. Patterson, one of the physicians who advised Robert Todd Lincoln. The building changed owners several times after Mary Lincoln's stay in 1875 and has been converted into apartments. It is not open for tours.
Presented by Dr. Neil Gale, Ph.D. at 11/20/2016 09:44:00 AM