Now largely forgotten, this company was once one of the leading business enterprises in the United States.
In 1838, when he was 13 years old, John Villiers Farwell moved from New York to Illinois with his family.
In 1845, the 20-year-old Farwell headed to Chicago, where he worked as a clerk for several merchant houses engaged in the sale of dry goods such as textiles, clothing, and home furnishings.

Farwell became a partner in the largest of these Chicago dry-goods firms, which changed its name from Cooley, Wadsworth & Co. to Cooley, Farwell & Co. in 1857.

One of Farwell's associates in this company was the young Marshall Field.
By 1863, Cooley, Farwell & Co. became Farwell, Field & Co. when Marshall Field was 29 years old.
In 1865, John V. Farwell & Co. was established after Marshall Field departed.
Potter Palmer of P. Palmer & Company, a dry goods store, invited Marshall Field and Levi Zeigler Leiter to form the partnership of Field, Palmer & Leiter in 1865 at 137 Lake Street in Chicago. Field took control of the partnership in 1881.
A wholesaler of dry goods who supplied smaller wholesalers and retailers around the Midwest, Farwell & Co. operated on a very large scale. Annual sales reached nearly $10 million by 1870 and stood at about $20 million in 1883 when the company moved its 600 employees into a new eight-story, 400,000-square-foot building at the corner of Monroe and Market Streets.
By the end of the 1880s, Farwell (along with Marshall Field, its greatest Chicago rival) ranked as one of the top three wholesalers in the country. 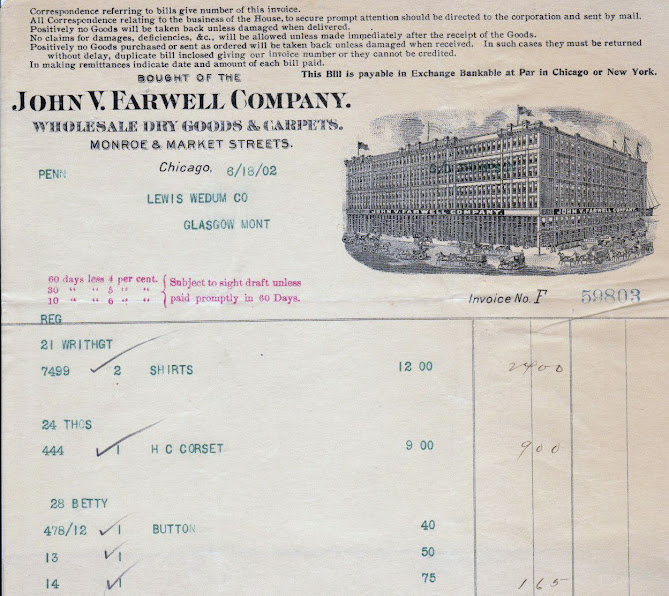 Unlike Field, however, Farwell did not establish retail stores. During the first decades of the twentieth century, as more manufacturers sold directly to retailers (including large department stores, chain stores, and mail-order houses), traditional wholesalers such as Farwell & Co. suffered.
During the 1910s, the company (then led by John V. Farwell, Jr.) still grossed around $20 million ($627 million today) in annual sales and employed over 1,000 people at its Chicago headquarters, but it was no longer growing, and profits were declining.
In 1925, Farwell & Co. closed its wholesaling business, ending a 60-year reign as one of the city's foremost business enterprises.
The building was sold to Carson, Pirie, Scott and Co. Wholesale and was razed around 1949.
Some Recollections of John V. Farwell. A Brief Description of His Early Life and Business Reminiscences, in PDF. published 1911 - 264 pg.
MARSHALL FIELD AND COMPANY ARTICLES
Compiled by Dr. Neil Gale, Ph.D.
Presented by Dr. Neil Gale, Ph.D. at 12/28/2022 09:00:00 PM