Hugh Brannum (1910-1987) was an American vocalist, arranger, composer, and actor known for his role as Mr. Green Jeans on the children's television show Captain Kangaroo.
Brannum was born in Sandwich, Illinois, in 1910 to a Methodist minister. He attended Maine East High School in Park Ridge, Illinois, where he played sousaphone in the school's marching band, later learning the bass violin.
Robert James “Bob” Keeshan, Captain Kangaroo, had a recurring role as the Town Clown, a pantomime piece that took place in and around the exposed wagon home of a tramp-like circus clown.

The "Kangaroo" part of Keeshan's name came from the oversized pockets on the lower half of his bright red jacket.

One of the show's long-running gags was the "Ping-Pong Ball Drop," instigated by the telling of a joke (usually a knock-knock joke) by Mr. Moose, in which the punchline included the words "ping-pong balls." At the mention of those three words, a shower of ping-pong balls was released from above on the Captain. Especially in later seasons, the show also featured a running gag where on selected episodes, the Captain would try to perform a particular activity three or four times in the episode, only to fail differently on each attempt.
At the end of each episode, the Captain always encouraged parents watching the show to spend quality time with their children daily, and he often demonstrated various creative ways to do so. In later seasons, that changed to him saying, "Well, what would you like to do today? You know it could be a good day for..." then a song would list many different activities while short film clips of each related activity are presented. The song ended with the singers saying, "There's so much to do. These things are just a few." Then it would cut back to the Captain, who would sign off with, "So whatever you do, have a great day!" 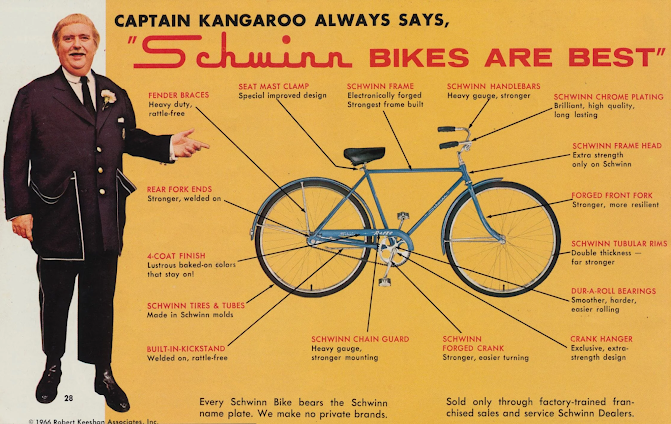 The Captain himself was enlisted to sell Schwinn-brand bicycles to the show's audience, typically six years old and under. At the end of each live Schwinn marketing promotion, Bob Keeshan would intone, "Schwinn bikes—the quality bikes—are best!" and "Prices slightly higher in the South and the West." Schwinn deemed the on-air marketing program successful, and the company increased its market share of child and youth bicycles throughout the 1960s.

The marketing program continued through the 1971 season, when the Federal Trade Commission's Staff Report, Guidelines on Advertising to Children, recommended against Schwinn's on-air marketing practices using the show's host. In response, Schwinn and the show's writers altered the format in 1972. The Captain no longer insisted that his viewers purchase a Schwinn but instead made regular on-air consultations with the new Captain Kangaroo character, Mr. Schwinn Dealer. Brilliant.
VIDEOS
Opening Theme for the Captain Kangaroo Show.
Captain Kangaroo Episode From 1956
Captain Kangaroo (Bob Keeshan) on 48 Hours (CBS) 1995
Opens with the Ping-Pong Ball Drop. 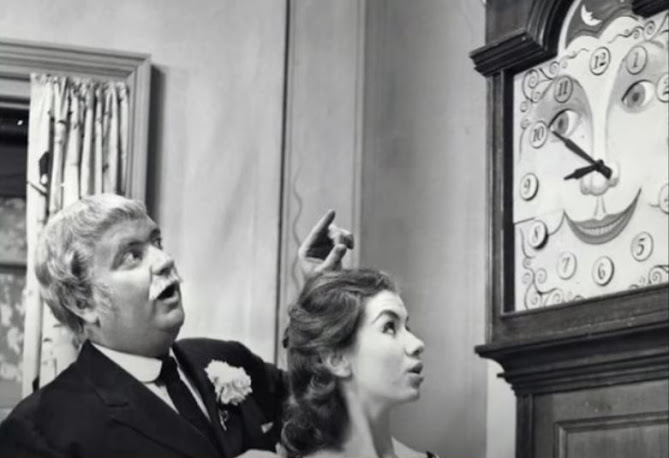