The History of the Mill 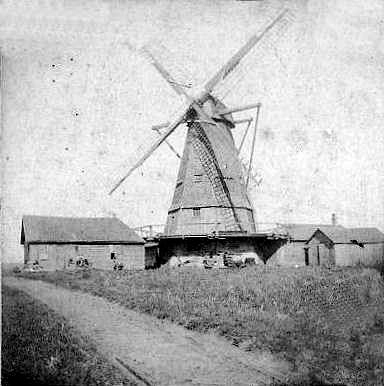 Facing Northeast to the entrance of Mount Emblem Cemetery is the Fischer Windmill, the oldest standing custom windmill in Illinois. Now beautifully adorned by planned landscaping—including Lake Emblem, evergreens, and lilac bushes—it is hard to imagine that this was once a thriving farm.
Johann Frederick L. Fischer owned nearly three hundred acres across DuPage and Cook counties. Before his death, he left his son, Henry Frederick Fischer, with the land in DuPage County. The land was unincorporated, and it wasn't until 1981 that the City of Elmhurst annexed it. 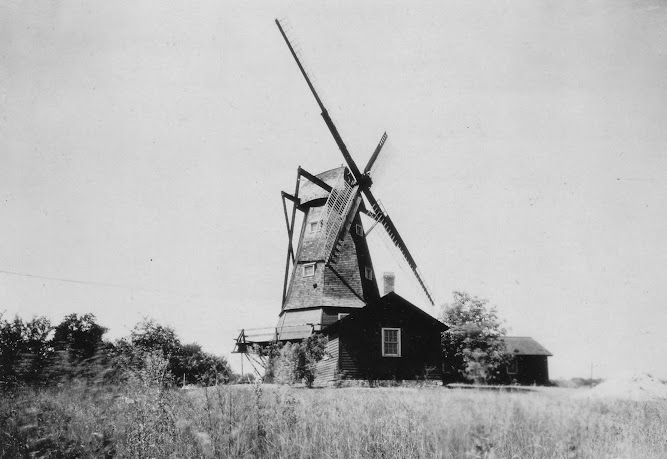 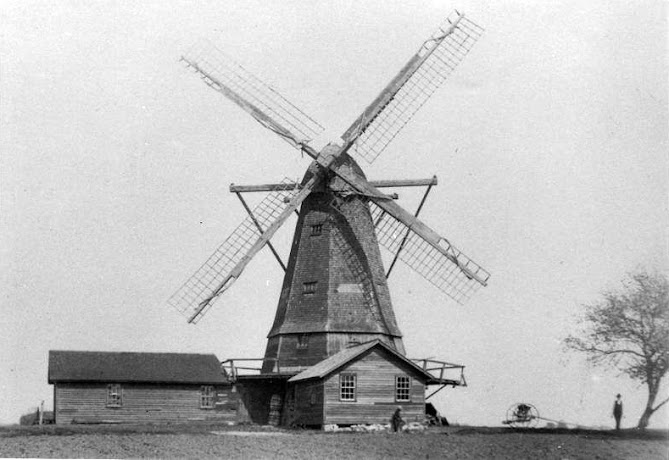 Henry began mill construction around the end of the Civil War in 1865. As an interesting side note, the Graue Mill was erected by Henry's brothers-in-law, William Asche and Frederick Graue. The mill was not made from local timber; its parts were prefabricated to Henry's specifications and shipped to Elmhurst from Holland in pieces (similar to the method used in constructing De Immigrant in Fulton).
Asked to aid with the construction of the mill were: Christian Heidemann, whose own mill in Addison would later be based on Fischer's design, and Henry Korthauer, a cabinet maker from Bensenville. It took nearly three years to build because of design changes during construction. 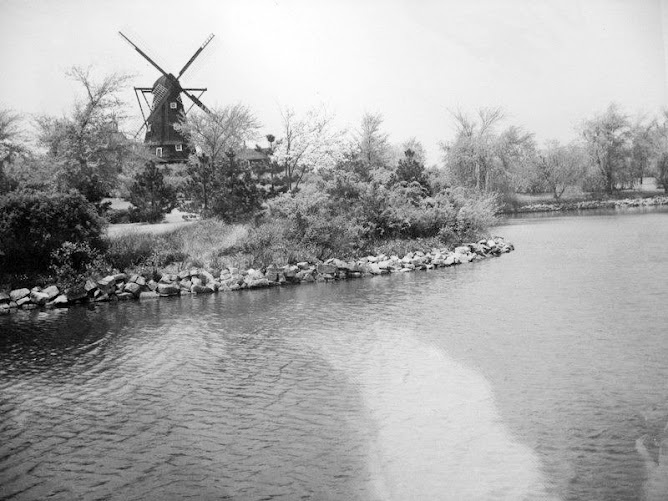 The hand-crafted mill features cypress beams on a two-story stone and brick foundation. The gears are made of hickory and white oak; the great spur wheel, located on the third floor, took six months to complete. The mill was fitted with white pine sails spanning 74 feet, making it one of the largest in the state.
Technologically speaking, the mill is very advanced: it features grain elevators; a fly-ball governor to tenter the grinding stones; an auxiliary drive system; "shakers" that tap grain into the stones, the latest wheat-cleaning and corn-shelling machines; and a spiral conveyor.
The east shipping wing was built into the mill to house the large wheat bolter, which separated fine flour from more coarse bran. During construction or shortly after completion, a north wing with wide double doors was added for receiving wagonloads of grain. 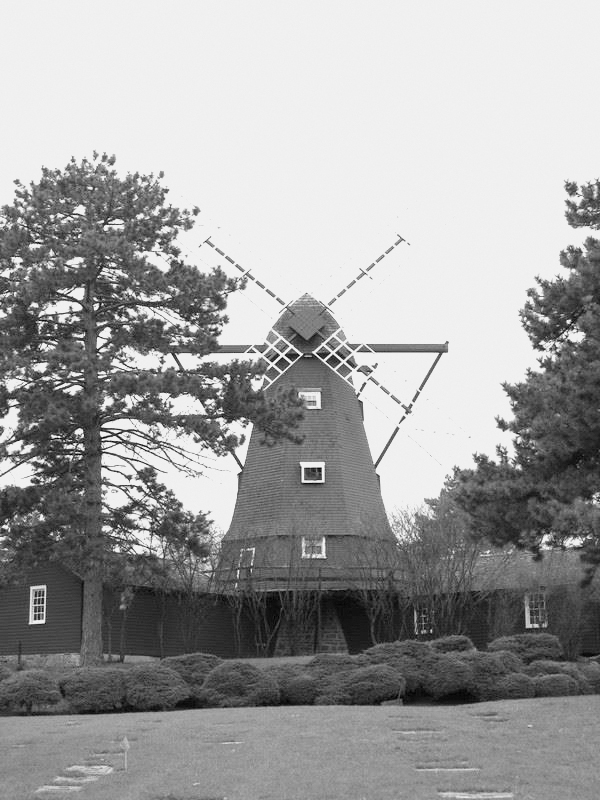 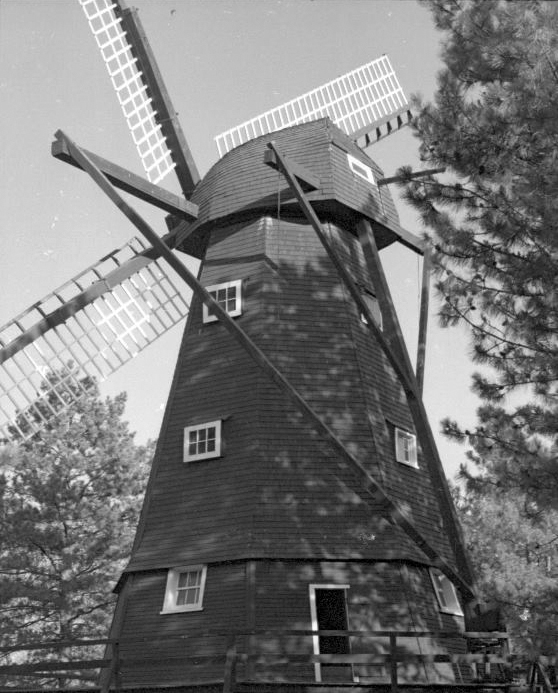 The mill began the grinding process with 'two run-of-stones,' one for wheat and one for corn, by 1867, capable of grinding 40 barrels daily. A west wing was constructed not long after to house a 25-horsepower wood-burning steam engine to drive the machinery on calm days. A small building just south of the east wing was built around 1875 and likely served as an office, but it does not appear in photographs taken after 1886.
In 1877, Henry sold the mill and ten acres to Edward Ehlers for $10,000. Henry moved his family to Oregon, Illinois (est 1833), where, three years later, he sold another 21 acres to Edward. Henry used the money to purchase a water mill capable of 50 barrels per day.
Mount Emblem Cemetery 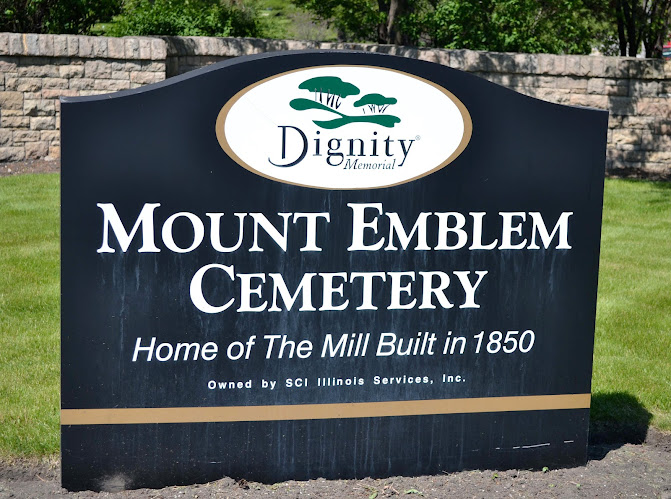 Edward Ehlers' widow, Caroline (daughter of Henry Korthauer, one of the original builders), sold the farm and windmill to the Mount Emblem Association for $10,000 in 1925 ($170,000 today). Although the windmill and farm buildings were initially scheduled for demolition, the association hired Henry and Franklyn Ehlers, Edward's sons of Ehlers Brothers General Contractors, to preserve the mill as a museum. Ehlers Brothers Construction also built the Elmhurst State Bank Building (now a 5th/3rd Bank) at 105 S York Rd.
They installed new windows, shingles, and trim; replaced and reinforced the stage and handrails; painted the mill; and built new sails, which were turned into a Saint Andrew's cross ("X" formation), meaning the mill is in a "long rest."
The cap was turned Northeast toward the cemetery's entrance, but prevailing west winds lifted the mill's cap off the dead curb track. To prevent future damage, the cap was permanently strapped to the tower. The Itasca Electric Store installed flood lights on the roof of the North and East wings to illuminate the mill at night. The west wing was destroyed to construct the parking lot of the administration building, but the iron drive shaft flange is still visible from the exterior of the mill's west wall.
The cemetery's administration building, along with the entrance gates and bridges, was designed to resemble the English architecture of the 1850s to "match" the styles used when the windmill was built; however, these copper and stone English structures only contrast with the German and Dutch woodwork of the mill.
It took eleven years for the architects of Simonds, West, & Blair to transform 75 acres (now 160 acres) of flat farmland into a picturesque, tranquil scene with tens of thousands of new trees and shrubs, in addition to the creation of Lake Emblem. Dr. Preston Bradley dedicated the cemetery in June of 1936. For years, the mill could broadcast music on Sundays and holidays from loudspeakers in the third-floor windows.
The mill became an icon as the subject of artists' paintings and the backdrop for both weddings and funerals. In 1956, the DuPage County Historical Society awarded Mount Emblem for its mill preservation.
Over the years, west winds continued to cause damage to the mill. The sails lost their wind boards, and three of them broke. The replacement sails, nearly identical to the one remaining original, were a few feet shorter with only 26 sail bars instead of 30.
During the winter of 1990-91, a severe storm nearly destroyed the mill. Forces against the tail of the cap caused the brake to release and the sails to turn. The wind shaft twisted apart. As the sails fell, the brake wheel rose until its teeth came into contact with the wallower, which, thankfully, held together and prevented the machinery from causing further damage. The aging mill was deemed structurally unsafe and was thus permanently closed to the public.
New replacement sails were installed for show, built without an angle of weather, and this time with only 19 sail bars each. In 1998, yet another storm tail-winded the cap, snapping the two upper sails. These were replaced, and all four sails were reinforced with extra bolts, clamps, and cables.
A winter storm in 2004 brought them down again. For the bulk of 2004, the sails and wind shaft sat on the ground to the east of the mill as a gaping hole in the cap exposed the brake wheel. In early 2005 the sails were replaced again, with just 13 widely-spaced sail bars and constructed of lightweight aluminum.
Wheat grinding likely stopped around 1894 when production moved further West into Kansas and Nebraska. The steam engine in the west wing was removed in 1910, and its space was used for storage. The mill probably stopped grinding corn between 1912 and 1916 when Edward Ehlers died.
Renovation, but not Restoration
In 2010, the east shipping wing slipped off its foundation, breaking one of the stage's supporting timbers from the stone wall. The blizzard of 2011 caused the stage to fall onto an electrical box near the east wing, and the wind blew open two of the access doors allowing snow to drift in.
As part of the O'Hare Airport runway expansion program, deceased members of the Fischer and Asche families were relocated from St. Johanne's Cemetery to Mount Emblem. Norma Asche Lagerhausen convinced Dignity Memorial, the new owners of Mount Emblem, to keep and restore the mill.
Despite the outcry from the community and millwright Lucas Verbij, general contractors were hired to reinforce the structure but not restore the mill to working condition. Work began in April 2015.
The Fischer Windmill Data
Tower Height: 51 Feet
Sail Span: 74 Feet (Original); 50 Feet (Current)
OWNERS
Henry Frederick Fischer (1867 - 1877)
Edward Ehlers (1877 - 1916)
Caroline Ehlers (1916 - 1925)
Mount Emblem Cemetery (1925 - present)
MILLWRIGHTS
Henry Frederick Fischer (Original)
Christian Heidemann (Original)
Henry Korthauer (Original)
Henry Ehlers (Restoration)
Franklyn Ehlers (Restoration)
CONSTRUCTED
(1865 - 1867) Original
(1925 - 1926) Restoration
USES
(1867 - 1874) Wheat
(1867 - 1916) Corn
(1936 - present) Bell Tower
Compiled by Dr. Neil Gale, Ph.D.
Presented by Dr. Neil Gale, Ph.D. at 10/05/2022 03:31:00 PM