The benefits of maple trees growing in this native timber area were likely enjoyed long before the Funk family settled in 1824.
History has it that Indians were the first maple sirup producers. They used maple sugar to season their corn and other vegetables and poured maple sirup over their fish and meat. Following is one of the many legends of how maple sirup was first discovered.
One night upon returning from hunting, an Iroquois chief named Woksis plunged his hatchet into the side of a tree for safekeeping overnight. In the morning, he removed his hatchet and went out to hunt. There happened to be a bowl directly underneath the gash left by Woksis' hatchet, and the sap began to flow in the bowl. Woksis' wife later noticed that this bowl was full of liquid and, mistaking it for water, used it to cook a venison stew. The water evaporated from the sap as the stew cooked, leaving a thick, sweet substance. Both Woksis and his wife were pleasantly surprised by the sweet-tasting stew, and thus it was discovered how maple sirup could be made from sap.
Isaac Funk, the pioneer founder of what would later become known as Funks Grove, chose his location well in 1824—good water supply, fertile soil, and timber for shelter and heat.
Isaac raised livestock and drove it to market on foot. He later served in the Illinois Senate, where he was a friend and supporter of Abraham Lincoln. While he was away, his sons, led by the eldest, George Washington Funk (whom they dubbed "The General"), took care of the farm. Isaac and his sons also made maple sirup and sugar—cooking the sap in kettles over a fire—for personal use since it was the only readily available source of sweetener. Around 1860, Isaac's youngest son, Isaac II, took over the sirup production.
sidebar

Arthur Funk, Issac Funk II's son, replaced his father's wooden spouts with metal spouts purchased from Vermont. The small, peaked cabin that served as the first commercial sirup farm's cooking house stood on the ground now occupied by the Funks Grove Interstate 55 rest area.
In 1896, Arthur's brother, Lawrence, took over the operation, cooking the sirup in a flat-pan evaporator and putting out about 1,000 buckets at once.
​In the early 1920s, the reigns were handed over to Arthur and Lawrence's cousin, Hazel Funk Holmes (daughter of Isaac II's brother Absalom Funk), who owned the property on which the sirup operation is now located. Hazel's permanent residence was out East, so she rented the property to tenants who farmed the land and made the maple sirup. She had the little peaked cabin Arthur, and Lawrence had used as a cooking house moved to the present location, using it as a guesthouse and her summer home. A new sugarhouse was built to accommodate a flue-pan evaporator. During this same time, the paved road that later became Route 66 was finished near the sirup farm. At this time, the Funks Grove sirup producers were hanging about 600 buckets and made up to 240 gallons of sirup per year. 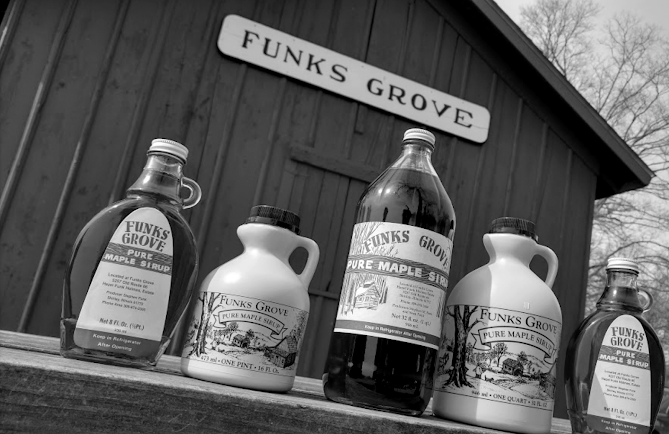 In her will, Hazel arranged for her timber and farmland to be protected by a trust that ensures that future generations will continue to enjoy the "sweet stuff" produced in Funks Grove. In this trust, Hazel expressed her wish to keep the spelling of "sirup" with an "i." The Funks obliged.
sidebar

“Sirup” with an 'i' is listed in Webster's Dictionary as the concentrated juice of a fruit or plant. It's the same definition given for "Syrup." Sirup was commonly produced without adding any other types or forms, natural or chemical, of sugars.  Funks Grove uses this time honored method.

In 1942, sirup production was halted because of the war—heavy taxes on sugar made the business unprofitable. But production resumed in 1943, and in 1947 Stephen Funk, son of Lawrence, and his wife, Glaida, took over the operation. In 1958, Stephen had the first underground cistern installed. Before, the sap had been emptied into a storage tank higher than the evaporator, employing gravity to cause the sap to flow into the evaporator. They also began using oil to fuel the cooking process rather than wood. In 1960, Stephen experimented with tubing as a method for gathering sap. The tubing ran along the ground, and the Funks soon found that squirrels could chew up the lines faster than they could be repaired, so they decided to return to using the traditional metal buckets.

In the early 1970s, construction began on Interstate 55—and it was routed to cut right through the Funks Grove timber. Fortunately, the Funks were able to petition to get it rerouted and save their precious timber. At first, the Funks were concerned that this new road would detract from one of their primary sources of customers—people who decided on impulse to stop while traveling Route 66—but once they erected a sign on the new interstate, new business started stopping in. Stephen and his son Mike formed a partnership In the late 1970s. 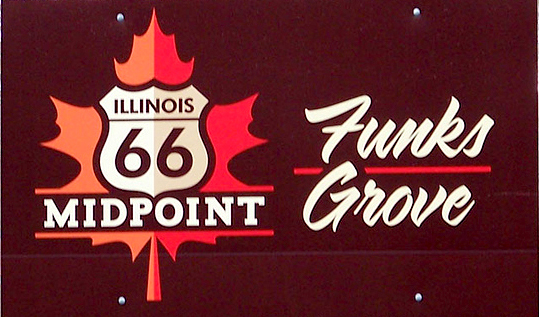 In 1988, Stephen retired, and Mike and his wife, Debby, took over the business. This same year Stephen, Mike, and Mike's brothers, Larry and Adam, built the sugarhouse we use today.
Funks Grove Pure Maple Sirup Video
In 1989, Mike decided to try tubing again, this time with the lines suspended above the ground and has continued to improve and expand this system over the years since. 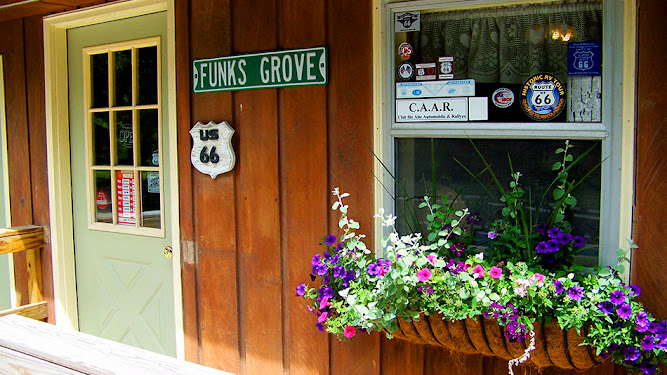 During the "in-vogue" nostalgic craze for Route 66 from the 1970s into the 2000s, interest in Funks Grove Maple Sirup grew into shipping International sales, and people from many countries found their way to Rt.66 and Funks Grove. Bikers groups, caravans of all kinds of groups traveling the Illinois portion or traveling the entire Rt.66.
Funks Grove is still going strong and looking forward to their 2023 season—March through August.
I will try the Bourbon Barrel-Aged Maple Sirup next year since I was too late this season.
History by the Funk Family
Edited by Dr. Neil Gale, Ph.D. — BOD, Route 66 Association of Illinois, 2013-2015
Presented by Dr. Neil Gale, Ph.D. at 9/19/2022 06:41:00 PM