Before 1919, the tract of land located south of Roosevelt Road and west of First Avenue in today's Broadview, Illinois, was a cornfield.
During the spring of 1919, clothing merchants Decker & Cohen acquired this land and constructed an airfield. A metal hangar was erected on the northeast comer of this field, near the banks of the Des Plaines River. Meadows and pasture lands that were relatively level and free of holes made a suitable landing field for the airplanes of this era. Flying operations were possible in this field without having to prepare special runways.

Chief mechanic Louis Meyer and ex-Signal Corps pilots David Behncke and Bert Hassell uncrated and assembled two planes the company had purchased. These airplanes, equipped with 90-HP Curtiss OX motors, were Curtiss JN-4 models, more commonly known as "Jennies." The Jennies carried a pilot and a passenger, fore and aft, in open cockpits and enough gasoline for about two hours of flying time at a speed of sixty miles an hour. They were first put into action on June 13, 1919, as Checkerboard Flying Field opened for business and began sending the Jennies on delivery runs, bringing "Society Brand Clothes" to local towns within a 120-mile radius.
When Checkerboard was operating, bright red and white Checkerboard designs were found on the Jennies (to aid in the eye-catching advertisement of Society Brand Clothes) and on the hangar's roof (to help pilots locate the airfield). Such bright patterns made it difficult to miss the airport when planes passed overhead!
Obviously, the pilots did more than just deliver clothes in those Jennies. Off-hours were devoted to flying lessons, joy rides and pleasure hops. In addition, there was always stunt flying on weekends; such attractions brought people from miles around, creating a carnival atmosphere at the airfield.
In September 1921, the spectators were entertained by Ethel Dare dropping from the clouds, and in 1922 Bessie Coleman entertained crowds at Checkerboard. Such excitement induced the spectators to buy raffle tickets for the chance to ride in one of the planes." 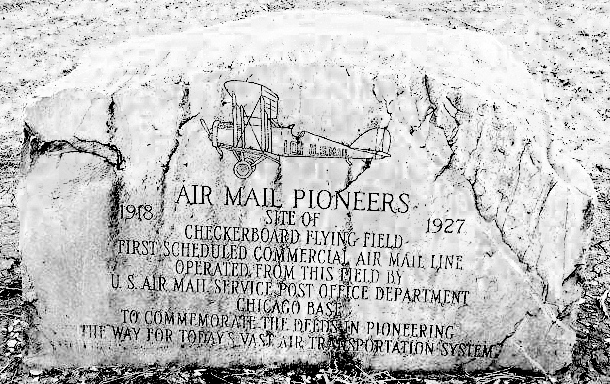 For those who don't believe that Broadview was north of Roosevelt Road (22nd Street).