Frederick “Fred” C. Tiedt was born in 1868 at his family’s home on the northeast corner of 91st and Wolf Road (now Willow Springs, IL). 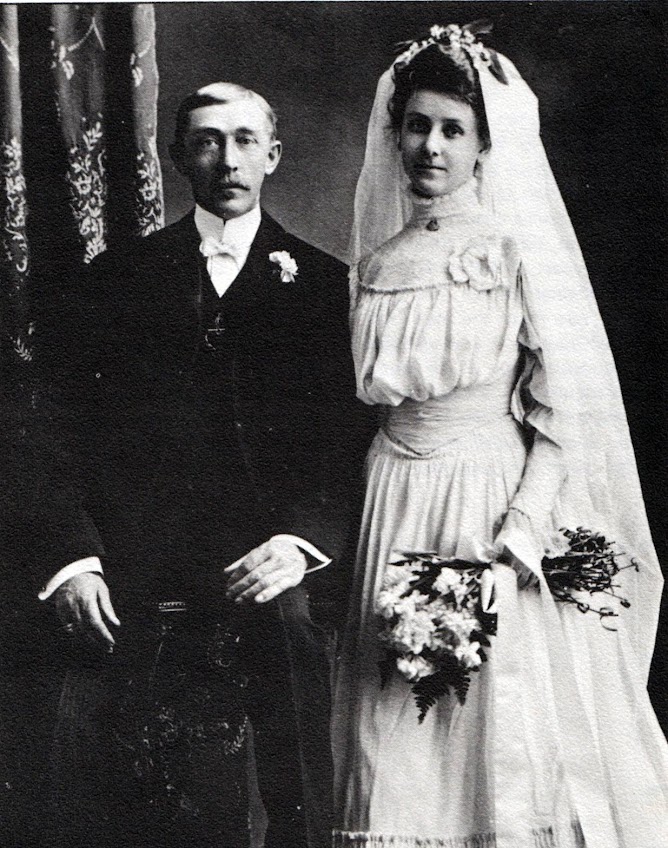 A born entrepreneur, Fred saw an opportunity to capitalize on the presence of over 2,000 ditch-diggers who were working on the Des Plaines River Sanitary Canal and he opened a saloon. The first two barrels of beer were sent to Tiedt's new saloon on credit from Atlas Brewery. It rained the day the saloon opened, but that didn't dampen the success of the new saloon in the wilderness.
Tiedt`s community almost immediately acquired a rowdy reputation. The laborers finally had a place to go for a good time, and they arrived in bunches - dirty, full of lice, but carrying good money. 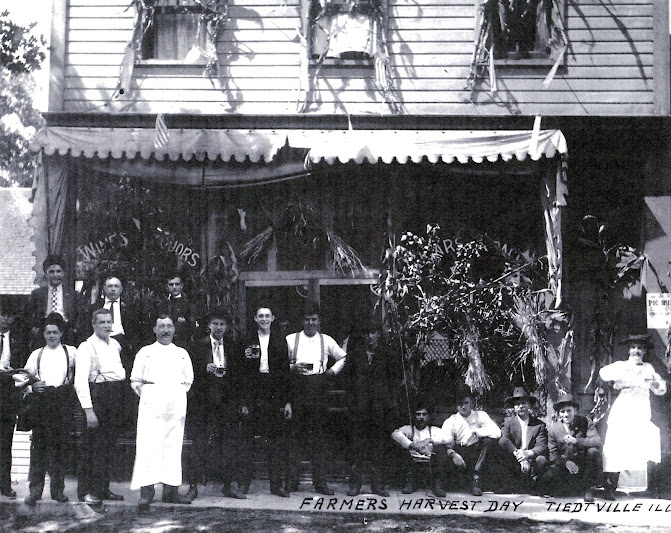 Twenty-four-ounce schooners of beer sold for 5¢. Whiskey was 10¢ a shot. A popular pastime among the boisterous canal workers was the holding of lice races, a filthy forerunner to the stock car races that would follow in later years.
There were already a few farmhouses clustered along 91st Street at Flag Creek, and with the addition of Tiedt's new business building at the very end of what is now Wolf Road, they came to be known collectively as Tiedtville (pronounced TEET-Ville). Tiedtville was located in unincorporated Hinsdale in present-day Willow Springs, Cook County, Illinois. 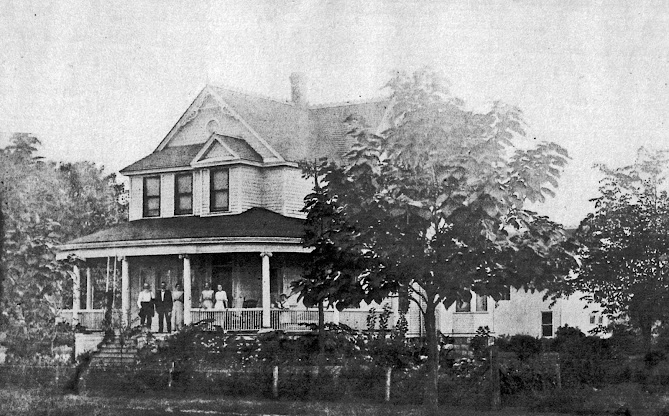 In the late 1800s, Tiedtville had about 200 residents nestled around 100 acres of woods. After the canal workers left the area, Fred developed a picnic area on a wooded grove near the Santa Fe railroad stop. The Santa Fe railroad agreed to make special stops on the weekends which attracted many city dwellers to the picnic site. City dwellers would visit for a day or stay in a cabin to fish and hunt. The railroad built two spur tracks: one at the saloon for delivering beer and coal and the other track transporting passengers to the Park.
Inspired by the success of his saloon and general store, Tiedt constructed several other buildings. A dance pavilion, a restaurant, and a four-lane bowling alley were built in a vague half-circle. The pavilion was constructed with huge beams bought from the Santa Fe Railroad that had been used in a bridge over the railway for wagons taking stone and materials to the canal workers. 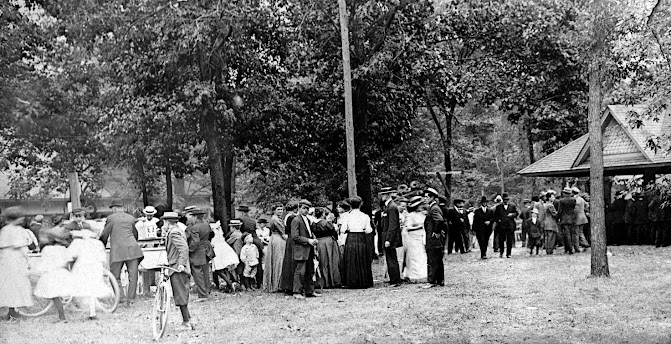 Tiedt also decided that Tiedtville, his privately owned town, ought to have a post office and that he ought to run it. He got himself appointed postmaster for the district on February 20, 1899. He hung a post office sign out in front of his general store. He began going down to the railroad track each morning to meet the train and hanging a bag of mail on the mail hook while catching another one from the passing train. Tiedtville was only an unofficial whistle-stop, which meant that sometimes the trains didn't bother to stop, depending upon time and the mood of the engineer. Passengers sometimes had to go back to the saloon and wait for the next train.
Tiedt built a picnic grove with a bar and an icehouse to cool the beer. Picnics became so popular at Santa Fe that Tiedt decided to increase his investment. Using his business acumen, Fred continued to grow his business enterprises. In 1896-97 Fred expanded the Picnic Grove to include a $6,000 quarter-mile track for horse and bicycle races. Horse-drawn land scrapers consisting of sixteen teams of horses built the track which included two grandstands. Initially, farmers raced their horses. As the picnic grove and race track expanded, they were called Santa Fe Park. (During the 1920s, a tornado wiped out the grandstands, and racing was discontinued.) The enterprise was lucrative with Tiedt sometimes making $1,500 to $2,000 a day.
He continued to look for gimmicks to attract customers and keep them busy. In the next few years, Tiedt built a steam-driven merry-go-round with a motor adapted from a threshing machine, a tintype gallery, and game booths. Many picnickers fished in water Tiedt diverted to a low spot on his property from Flag Creek. He rented rowboats, and he built a baseball diamond inside the racetrack in a position so that spectators could view the game from the track grandstands. 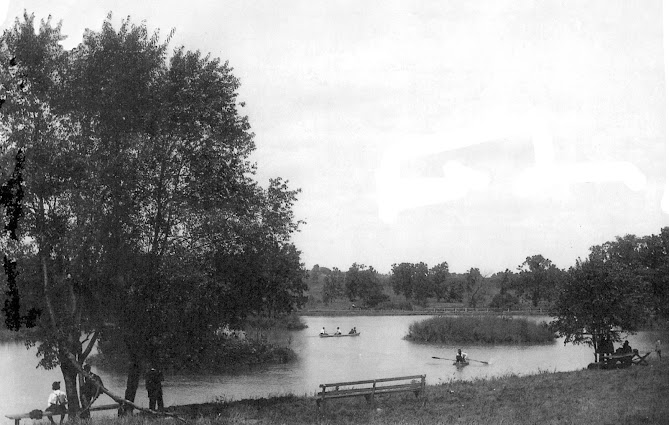 Customers found a full day of entertainment, and some of the more boisterous ones found themselves incarcerated in a small jailhouse Tiedt had built. Tiedt had no legal authority to pass sentences on rowdies, of course, but this was his method of crowd control.
Tiedt's picnics became bigger every year. He occasionally featured special attractions, like a balloon ascent. One day a big balloon was held down by 40 men and filled with hot air. Then a stunt man stepped into the basket and the balloon was released. He parachuted out and was injured falling into a tree. That was the last balloon ascent.
But it wasn't the last gimmick. One was a "wine climb" in which Tiedt would hang a gallon of wine from the center of the dance pavilion roof. The first person to climb up and get the wine after 9 p.m. could keep it.
A farmer in the Santa Fe Park area had a half-blind pony who appeared to be on his last legs. All he could do was run, which he did regularly and speedily, frequently beating much sturdier-looking city horses to the finish line while the locals lined their pockets.
Winters were comparatively dull around Tiedtville. Most of the action centered on the chopping of wood and the cutting of ice. Tiedt and his men would cut the ice off the top of the Des Plaines River and haul it in wagons over to the ice houses in the back of the bars. The ice blocks were kept separated with sawdust and stored until summer for use in cooling beer.
Fred also continued to build upon the family's successful annual Farmers' Harvest Day Picnic. The event began as a way to help local farmers celebrate the end of the harvest. The popularity of the Farmers’ Day Picnic continued well into the 1950s. Santa Fe Park eventually canceled its special arrangement with the Park due to the rowdiness of the passengers. This along with the Great Depression adversely impacted Santa Fe Park.

In 1892, Mt. Forest and Willow Springs incorporated combining their names to form Spring Forest, Illinois. The Tiedtville post office was discontinued in 1931. In 1937 Tiedtville was annexed when the village of Willow Springs incorporated and changed the name back to Willow Springs.
Fred Tiedt and his wife (Amanda Prescott) had four sons: Ralph, Lawrence, Howard, and Emery. When Fred died in 1946, his son Howard took over Santa Fe Park. Exhibiting the same entrepreneurial skills as his father, Howard formed a corporation to rebuild the race tracks--this time capitalizing on the growing popularity of stock car racing. In 1953, the Santa Fe Speedway opened. The Speedway had a quarter and a half-mile track with a motor cross course and two grandstands. The track used blue clay from southern Illinois for its surface. Howard added motorcycle races and other promotions such as the Tournament of Destruction and Powder Puff. Howard died in 1990 and his daughter managed the Speedway until it closed in 1995.
Compiled by Dr. Neil Gale, Ph.D.
Presented by Dr. Neil Gale, Ph.D. at 5:05 PM