"The Cosmopolitan Theatre," seating 1,181, opened September 6, 1913, in the North Englewood neighborhood on South Halsted Street between 79th and 80th Streets. It was originally built for the Ascher Brothers circuit. It was later operated as part of the Cooney Brothers, and still later, the Warner Brothers and Stanley-Warner chains. 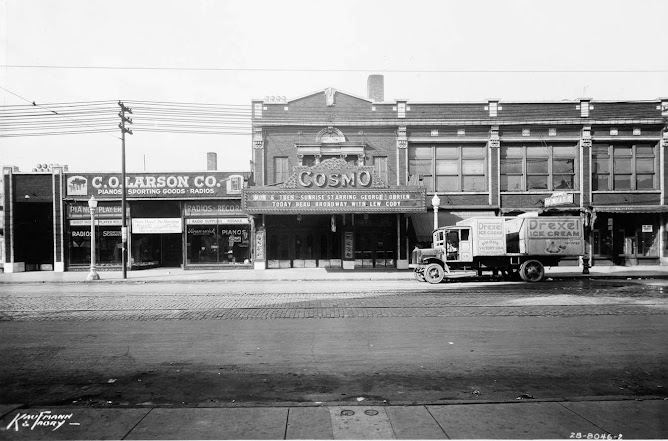 An article about the Ascher Bros circuit in the March 10, 1917 issue of Moving Picture World had this critique about the Cosmopolitan Theatre:

“A good deal of credit is due Bruce Goshaw for the success of the Cosmopolitan Theatre, Halsted and Seventy-ninth streets, which was the first thousand-seat house to be erected for the Ascher Bros.
Manager Godshaw enjoyed the distinction of having managed this movie house since its opening on Saturday, September 6, 1913. This fine modern structure is situated in the suburb of Auburn Park far out in the southwest end of town and is strictly a neighborhood theater. Although in its fifth season, some of the ‘opening night’ patrons can still be seen in the audience. The foyer of the theatre is finished in marble and the general color scheme is 'old rose' and 'blue.' The equipment is modern in every detail from the box office to the operating room. Feature films are exhibited both afternoons and evenings, at an admission price of 10¢."