Sears Tower - The History of the First Sears Tower.

The Sears Tower (now Willis Tower), 233 South Wacker Drive, Chicago, was once the tallest building in the world, 1,729 feet at the highest point, with 108 floors until 1998. It is easily one of Chicago's most recognizable buildings. However, the 'Loop' Sears Tower was not the first Sears Tower in Chicago.
In 1904 the company purchased over 40 acres of land on Chicago's West Side and embarked on one of the most significant retail development projects to date. The Sears Merchandise Building Tower complex occupied an area bounded on the north by Arthington Street, the south by Fillmore Street, the east by Spaulding Avenue, and the west by Central Park Avenue.

The Sears Merchandise Building Tower at 925 South Homan Avenue, Chicago, is a fourteen-story structure with a limestone base and Chicago Common Brick walls. It is crowned by a Classical Revival top floor round-arch windows and a modillion cornice. It housed water tanks for firefighting, offices, and secretarial training facilities on the upper levels. It also housed the early radio broadcast facilities for WLS-AM. 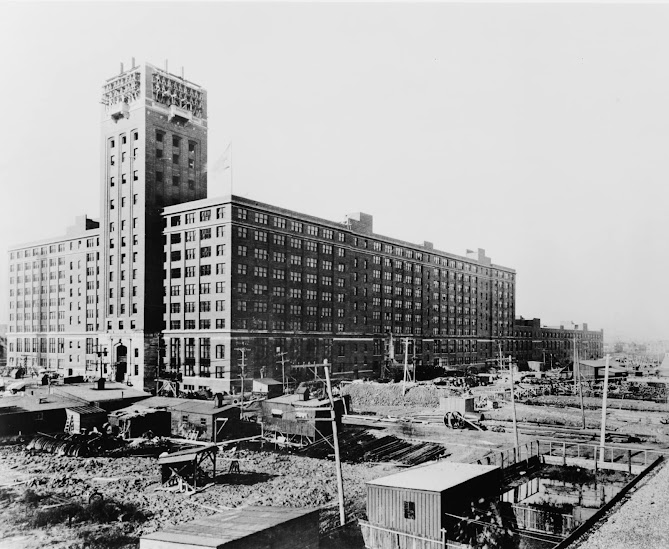 In 2015, the tower was renamed the "John D. and Alexandra C. Nichols Tower who restored the building. It is now a hub for nonprofit arts, multi-media education, youth leadership development, job training, and more. The School of the Art Institute of Chicago has its classroom on the 12th floor. The Sears Roebuck plaque is still visible on top of the building.
The surviving buildings can be seen from Homan and Arthington.
Compiled by Dr. Neil Gale, Ph.D.
Presented by Dr. Neil Gale, Ph.D. at 3/01/2022 05:31:00 PM