Levy Wittenberg was born in Kolnich, Russia, in February of 1850 to Israel Wittenberg and Sara, nee Cohen. We know that Levy had at least two siblings, Abraham (1865-1934) and Isaac (1880-1937), because they sued Levy for libel in 1903. Levy Wittenberg came to the United States in 1880 and settled first in New York and then finally in Chicago.
While still living in Russia, Levi Wittenberg married Gitel (Katie) Newman (1850-1940) circa 1870 while both were twenty years old. Katie told the census taker in 1900 that she had seven children, and all seven were still alive.

In later years Levy claimed that he moved to Chicago in 1883, but that may be unlikely unless he to Chicago ahead of his family. Levi was the first matzoh bakery in Chicago and quickly established himself as one of the top Jewish bakers in Chicagoland. 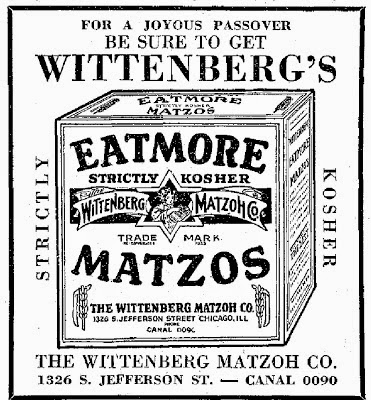 Wittenberg Matzoh Company was incorporated in Illinois in October 1901, as L. Wittenberg Company with the capital of $10,000 ($331,000 today), a bakery manufacturing unleavened bread, crackers, and cakes. Officers were Levy Wittenberg, Elijah N. Zoline, and Harris Bisco.
The Kosher for Passover operation took place in the early years on the bakery's second floor. The ground floor was for retail. When they needed more room, they moved around the corner to Maxwell Street.
Levi was not without controversy. The following article appeared in the Chicago Daily Tribune on June 30, 1903:

Charge Him With Libel in Issuing Circulars Attacking Their Business Integrity.

Three brothers are complainants and defendants in a libel case brought before Justice Richardson yesterday. Abraham and Isaac Wittenberg, bakers at 529 Jefferson street, charging Levy Wittenberg with libel. The trouble started shortly before the Passover feast in April. The matzhos for the feast were bought from Abraham and Isaac Wittenberg, at a reduced price. Then, it is charged, Levy Wittenberg issued circulars of a libelous character, attacking the quality of the food sold by his brothers. One circular stated:

"Do not buy from them what are called matzohs, while in fact when you open the bundle you find the broken fragments of various food articles."

According to the complainants, the circulars were intended to attack their honesty. Justice Richardson continued the case until July 9, 1903. It is not recorded how the case turned out, but Levy Wittenberg's bakery was still producing and selling Matzoh long after the founder was gone.
Levy Wittenberg died on June 12, 1907, at home, 580 North Canal Street, from Lobar Pneumonia complicated by Diabetes. He is buried at Waldheim Cemetery in Forest Park, Illinois.
Eventually, they closed due to competition from the ever-modernizing Manischewitz Matzoh Bakery.
INDEX TO MY ILLINOIS AND CHICAGO FOOD & RESTAURANT ARTICLES.
Compiled by Dr. Neil Gale, Ph.D.
#JewishThemed #JewishLife
Presented by Dr. Neil Gale, Ph.D. at 2/15/2022 10:18:00 PM