Why Chicago's Street Suffixes are Inconsistent.

Every so often, a visitor to our city asks for directions to Madison Avenue. This makes a true Chicagoan's blood boil. The dumb tourist doesn't even know it's supposed to be Madison Street. "Hey, Mister, this ain't New York!" 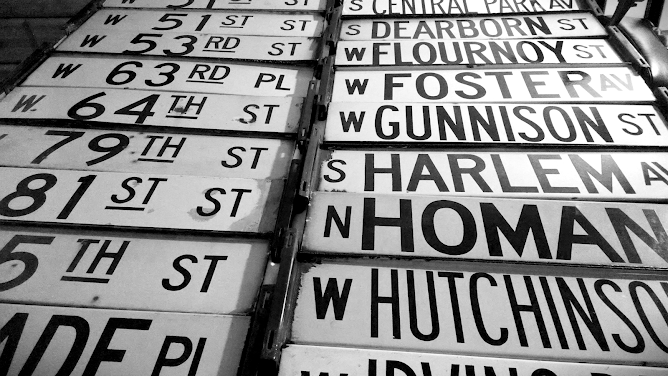 Actually, there is no particular rule on what is called a Street and what is called an Avenue in Chicago, and it's merely traditional usage.
But the other suffixes! Here we get into some technicalities. At one time, there was a whole protocol on how a suffix would be used on Chicago thoroughfares.
The house and street numbering system was inconsistent and became more so as Chicago annexed adjacent towns. The large-scale annexations of 1889 complicated matters throughout the city, and streets of the same name from towns and villages that were annexed became confusing to city services.
Let's take Boulevard. That title was reserved for streets under the jurisdiction of the Chicago Park District—brown street signs, remember? Garfield, Logan, and Jackson were examples.

Sometimes the Park District controlled a limited section of a long street. There, Oakley Avenue changed to Oakley Boulevard, Loomis Street became Loomis Boulevard, and so on. The most interesting case was Avenue L—part of it was called Avenue L Boulevard.
The Conundrum of Chicago's "Alphabet Town" Street Names.
Parkway and Drive were other Park District suffixes. Examples include Diversey Parkway, State Parkway, Lake Shore Drive, and the various roadways running through the large parks.
Irving Park Boulevard was not a Park District street; following protocol, the city renamed it Irving Park Road in 1937. And yet, thirty years later, old-timers still referred to Irving Park as "the Boulevard."
Indianapolis Boulevard and Forest Preserve Drive are two city streets, and both are supposed to be called Avenue. But among locals, the older usage persists.
So much for the Park District. Most Chicago streets were controlled by the City of Chicago—yellow street signs. And the city had a few rules of its own.
The word Road denoted a major commercial street, and this suffix became fashionable during the 1920s. Roosevelt, Cermak, Pulaski, and Pershing date from this era.
Place and Court were sidestreets. The Place suffix was used mainly for the South Side half-streets—35th Place followed 35th Street, 63rd Place followed 63rd Street and all the way down to the city limits.
Chicago also had a few oddball suffixes. These included Northwest Highway, Memory Lane, Palmer Square, and South Park Way. The last two were Park District streets.
These were the general rules for Chicago street suffixes. Of course, there were exceptions.
Congress Parkway was not a Park District street, and neither was Wacker Drive nor Ponchartrain Boulevard. On the other hand, most of Michigan Avenue and Marquette Road was controlled by the Park District and displayed the signature brown street signs.
Indian Road was a tiny residential street. And though Fairbanks Court was just a few blocks long, it carried some heavy traffic. So did Foster Place.
Once the City of Chicago took over the Park District, street suffixes were up for grabs. The section of La Salle Street north of the river was changed to La Salle Drive for a few years. Then it became La Salle Boulevard, and I'm not sure what they call it now.
There's evidence that the people in charge don't take suffixes seriously anymore. Cub fans know that when a ball is hit over the left-field stands, it lands on Waveland Avenue. But a few miles to the west, at least one sign reads Waveland Street.
Broadway, in case you haven't noticed, has no suffix. Please... read this article before making your argument.
Compiled by Dr. Neil Gale. Ph.D.
Presented by Dr. Neil Gale, Ph.D. at 8/31/2021 10:32:00 AM