Abraham Lincoln Played "Fives" Across the Street From His Springfield Law Office.

Serious Lincoln fans may have heard a reference to the “alley by the journal office” but not know about it. Abraham Lincoln was known to be a sportsman for most of his life in an age when organized sports were hard to find. As a young man, Lincoln was a wrestler with extraordinary strength who was inducted into the National Wrestling Hall of Fame.
He was known to roll “Ten Pins” (bowling) [1], play Billiards (not Pool) [2], and Chess [3] but admitted that he never excelled at any of them. Mr. Lincoln engaged in these games for exercise and amusement, both physically and mentally. He routinely regaled those present with jokes, western anecdotes, and stories during play, which made him popular with opponents and teammates alike.
Likewise, you may have heard that he was a handball player, as have I, but details have always been hard to find. The game of handball was much better suited to Lincoln. At 6 feet 4 inches tall, his long legs and gangly arms served the Rail Splitter well. Muscles honed while wielding an ax as a youth were kept tight and toned as an adult. Lincoln milked his own cows and chopped his own wood even though he was a successful, affluent lawyer with little time to spare.
In the years before Lincoln was elected president, he was a successful Springfield lawyer. He often played handball in an alley by the Illinois State Journal newspaper office to ease his stress. The paper occupied a three-story building at 116 N. Sixth Street. The building next door immediately south was a three-story building that housed a store operated by John Carmody. The next building south was known as the Logan Building, owned by Judge Stephen T. Logan.
The large vacant lot between these two buildings was the site of the storied impromptu handball court used by lawyer Lincoln and his friends. The brick walls of the Carmody store and Logan building formed the front and back walls of the handball court, and the other two sides were enclosed by wood fences standing 6 to 8 feet high. The fences also had wooden bench seats for visitors watching the matches or for players waiting their turn to take on the winner. 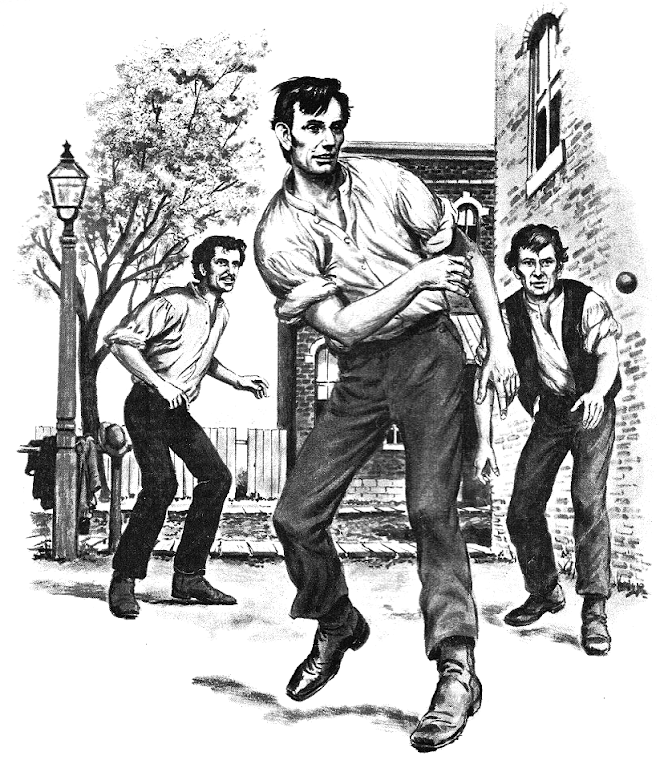 Although Assassin John Wilkes Booth was not in the production, he would appear at the McVicker’s four times in different productions between 1862 and 1863 while Mr. Lincoln was in the White House. Ironically, the McVicker's Theatre was the first place where actor Harry Hawk began theater work as a call boy or stagehand. Hawk was the actor on stage alone when Lincoln was shot and likely uttered the last words Mr. Lincoln ever heard. Who knew a well-worn piece of leather sports equipment could have so many connections?
Compiled by Dr. Neil Gale, Ph.D.


[1] Abraham Lincoln was the first prominent American to spend time playing "ten pins." As German immigrants settled in America, bowling became a major part of their festivals and picnic gatherings. Chicago and New York were the first cities where the sport took root, and at that point, it was primarily an outdoor sport. The first indoor wooden lanes were built in the 1840s in Manhattan, and the sport soon became a fad in New York.
[2] One day in October of 1858, Lincoln met Frederick L. Fake by chance at the Hardy House at First and Wright Streets in La Salle, Illinois, while detained a few hours for tile lack of transportation. Three games of billiards were played to the keen amusement of the large crowd which soon gathered. Lincoln proposed the game and refused Fake's offer of a spot (i.e., handicap) of "forty points in the hundred," Lincoln divested himself of coat, waist-coat, collar, and necktie, rolling his shirt sleeves to shoulders. When shooting, he very carefully squared himself. The game was played on a billiards table (larger than a "pool" table with no pockets). Lincoln talked and told stories, perhaps several of them, much to the delight of the large crowd in the little room as he played. Fake apparently won the first game. Because Lincoln refused the offer of a 50 point spot (in a game to 100) for the second game, saying he had not played his best game, etc., they divided the expense at the finish. Much story-telling went on by Lincoln, particularly of what he did not know of billiards, making everybody happy with a performance long to be remembered.
What a marvelous account! It shows Lincoln proposing the game, rejecting offers of a handicap, and partially disrobing as he prepares to play. It describes his technique in approaching a shot, the type of table, who paid, and it acknowledges Lincoln's story-telling as social discourse during the game itself. Parts of this account may be suspect.
NOTE: The 1857 and 1866 Springfield, Illinois, business directories listed the St. Nicholas Hotel (opened in 1855) at Fourth and Jefferson streets as the home of a billiard saloon.
[3] Abraham Lincoln played chess. One of his chess sets is displayed in the Smithsonian.
3a) A contemporary report said Lincoln played a very fair game, but not a first-rate one. While playing chess, Mr. Lincoln seems to be continually thinking of something else. Those who have played him say he plays as if it were a mechanical pastime to occupy his hands while his mind is busy with some other subject.   He plays what chess players call a "safe game."  Rarely attacking, he is content to let his opponent attack while he concentrates all his energies in the defense — awaiting the opportunity of dashing in at a weak point or the expenditure of his adversary's strength. He was the model of a chess general.
3b) An old friend of Mr. Lincoln once related to me another of his stories which shows not a little of his character. This gentleman was conversing with the President at a time during the War when things looked very dark. On taking leave, he asked the President what he should say to their friends in Kentucky—what cheering news he could give them of him. Mr. Lincoln replied:

"That reminds me of a man who prided himself greatly on his game of chess, having seldom been beaten. He heard of a machine called the "Automaton Chess Player," which was beating everyone who played against it. So he went to try his skill with the machine. He lost the first game, same with the second, and the third games. Then, rising in astonishment from his seat, he walked around the machine and looked at it for a few minutes. Then, stopping and pointing at it, he exclaimed, 'There is a man in there.'"

NOTE: The chess automaton, the Turk, aka the Mechanical Turk or Automaton Chess Player, was a fake chess-playing machine constructed in the late 18th century. From 1770 until its destruction by fire in 1854, it was exhibited by various owners as an automaton, though it was eventually revealed to be an elaborate hoax. Constructed and unveiled in 1770 by Wolfgang von Kempelen, the mechanism appeared to be able to play a strong game of chess against a human opponent, as well as perform the "Knight's Tour," a puzzle that requires the player to move a knight to occupy every square of a chessboard exactly once. The Turk was, in fact, a mechanical illusion that allowed a human chess master hiding inside to operate the machine. With a skilled operator, the Turk won most of the games played during its demonstrations around Europe and the Americas for nearly 84 years.