Abraham Lincoln Didn't Say the Famous 10 Cannots. So Who Did? 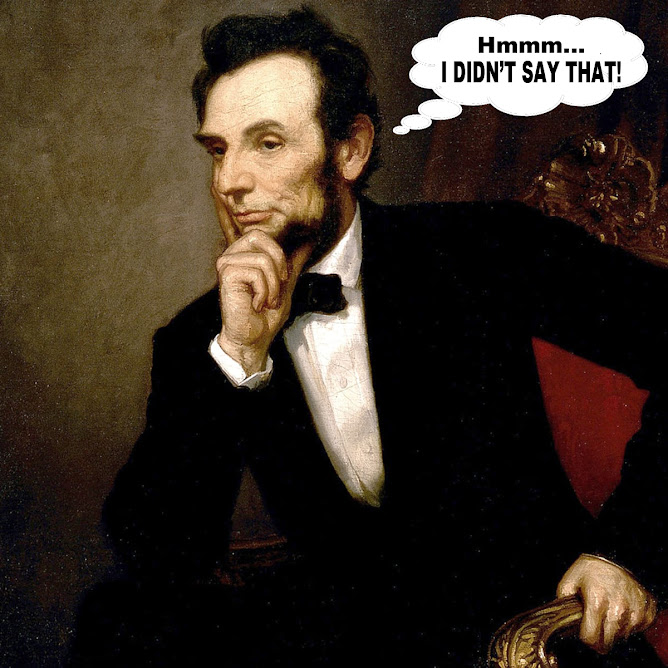 Historians have been trying for decades to set the record straight on the following "Ten Cannot" statements:
Abraham Lincoln is probably the most widely misquoted president in history. Everyone from greeting card writers to members of Congress attributes sayings to Lincoln that Lincoln DID NOT SAY. The "10 Cannots" (variously known as the "Industrial Decalogue," the "Ten Don'ts," the "Ten Cannots," "Ten Things You Cannot Do, "or the "American Charter") are a prime example. Over the years, some or all of these sayings have popped up in countless news articles, business newsletters, and political speeches and fliers, always attributed to Lincoln. According to one biographer, Margaret Thatcher, Prime Minister of the United Kingdom, carried a copy of "the Abraham Lincoln speech" in her purse.
So…where did the "10 Cannots" come from, and how did Abraham Lincoln become the author?
The "Cannots" was written by the Rev. William John Henry Boetcker of Erie, Pennsylvania, a Presbyterian minister who gave up the ministry to lecture on industrial relations as the director of the pro-employer Citizens' Industrial Alliance.
In 1916 Boetcker published a booklet called "Inside Maxims," an early form of the "Ten Cannots." He later refined them in other pamphlets to further the cause of laissez-faire individualism. It was reprinted in 1917, 1938, and 1945.
The "Ten Cannots" are a small part of the numerous sayings and expressions erroneously attributed to Abraham Lincoln. Cut in stone over the entrance to the Museum of the City of New York, opened in 1923 as a history and art museum in Manhattan on Fifth Avenue, are words that Lincoln would have agreed with, but has never been documented as saying: "I like to see a man proud of the place in which he lives. I like to see a man live so that his place will be proud of him."
In 1942 the Committee for Constitutional Government, a lobby backed by the newspaper publisher Frank Gannett, distributed hundreds of thousands of copies of a leaflet with an authentic Lincoln quote on one side entitled, "Lincoln on Limitations." When the Committee published later editions of the leaflet, Boetcker's name was dropped, and the "Ten Points" were, by default, attributed to Lincoln.
In 1949 an Ohio congresswoman, Frances P. Bolton, read them as Lincolniana into the Congressional Record. Look magazine reprinted them with the suggestion that "It's about time for the country to remember." Congresswoman Bolton apparently had gotten them from a friend who had heard them delivered by Galen Drake, a radio commentator in New York City and one of the first talk show hosts. From Drake, they were traced to the Royle Forum Newspaper in New Jersey. Its editor, Richard Cook, had taken them from some direct-mail advertising by a firm which, in turn, had taken them from the Committee for Constitutional Government's 1942 leaflet.
Attempting to correct the record, Rep. Stephen M. Young inserted into the Congressional Record in 1950 an article from Harper's magazine, written by a Lincoln scholar, Albert A. Wolman, listing most of the "Ten Cannots" and much other material as falsely attributed to Lincoln. Another scholar, Roy P. Basler, debunked the material in the Abraham Lincoln Quarterly in December 1949.
Nonetheless, in 1954 President Eisenhower's postmaster general, Arthur E. Summerfield, cited the "Cannots" as Lincolnian wisdom in a speech delivered in Akron, Ohio. Stephen A. Mitchell, chairman of the Democratic National Committee, charged that Summerfield was trying to "put over a Lincoln hoax" — attempting to make Lincoln sound like a modern-day Republican.
The "Cannots" have even been entered into the Congressional Record again by Virginia Rep. G. William Whitehurst in 1975.
The confusion continued. In 1976 the Tiffany Company ran the 10 nuggets as an ad in the New York Times under the heading: "Abraham Lincoln Said More Than 100 Years Ago." When the attribution was challenged, Tiffany acknowledged it had erred and apologized to its customers.
In discussing fundamental values at the 1980 Republican convention held at the Joe Louis Arena in Detroit, Michigan, Ronald Reagan erroneously attributed to Abraham Lincoln several positive principles. At the convention, Mr. Reagan quoted the third, fifth, and tenth of these precepts (general rules intended to regulate thought or behavior), attributing them to Abraham Lincoln. Press reports, at least initially, took Mr. Reagan's word for it.
Abraham Lincoln — not Yogi Berra — is the most misquoted American. And despite decades of correction by historians, Lincoln scholars and experts, newspaper columnists, and others, the "Cannots" continue to be attributed to Lincoln.
Such sayings — and innumerable anecdotes — are commonly attributed to Lincoln because someone thinks they are clever and sound Lincolnesque
Compiled by Dr. Neil Gale, Ph.D.

OTHER MAJOR MISQUOTES
In 1863, President Lincoln was quoted as saying, when he looked upon "the graves of our dead heroes" at Gettysburg: "I do love Jesus." Again, this has not been substantiated.
The most notorious of the false quotations, still cropping up occasionally though Roy Basler and others have frequently tried to nail it, is the following:

"I see in the near future a crisis that unnerves me and causes me to tremble for the safety of my country. As a result of war, corporations have been enthroned and an era of corruption in high places will follow, and the money power of the country will endeavor to prolong its reign by working upon the prejudices of the people until all the wealth is aggregated in a few hands and the republic destroyed."

According to Reinhard H. Luthin, author of "The Real Lincoln," this fraudulent quotation was first used in the 1880s during the Greenback Party's agitation for "paper" money as a counterweight to the power of "Wall Street."
In 1909 the Rev. J.T. Hobson quoted Lincoln's son Robert Todd Lincoln as recalling a little "sermon" his father had preached "to the boys: "Don't drink, don't smoke, don't swear, don't gamble, don't lie, don't cheat. Love your fellowmen and love God. Love truth, love virtue, and be happy." When Robert Todd Lincoln was asked about this, he flatly denied having heard of it before.
The following quotation, a favorite of many people, is chiseled into the stone entrance of the Daily News Building in Manhattan (opened in 1930): "God must have loved the common people: He made so many of them." But there is no proof that they are Lincoln's words.
Factual statements by Lincoln endorsed the right of labor to form unions and to strike. A paragraph from his inaugural address ranked labor above the capital, and another statement held that labor should receive the good things it produces. But the following alleged Lincoln quote is false: