Abraham Lincoln and the Middle East.

The story of Abraham Lincoln’s self-education is a well-known one. A voracious reader from a very young age, Lincoln devoured whatever books he could get his hands on. Indeed, he once told his friend, Leonard Swett, that as a boy, “he borrowed and read every book he could hear of for fifty miles.”
We know that Lincoln read the Bible, classics, histories, poetry, drama, and patriotic works. But, little has been written about one work in particular that had great influence upon Lincoln’s later life and diplomacy. Over eighty years ago, the eminent Lincoln scholar, R. Gerald McMurtry, wrote a short article about the influence that Captain James Riley’s Narrative of the Loss of the American Brig Commerce 1817 had upon Abraham Lincoln.

According to McMurtry, “the book is said to have a striking and permanent impression on the minds of early American youths who read it,” and Lincoln certainly fell into that category. Besides being an exciting adventure of capture, release, and cultural immersion, Riley’s story left “an indelible impression on Lincoln’s mind regarding race superiority and the moral wrongs of slavery,” not to mention keen and critical observations of the Arab world. As McMurtry perceptively noted, the complete title of Riley’s Narrative not only summarizes the contents of the book but also indicates how Lincoln could have become enthralled with it and remembered it many years later as President of the United States:

An authentic narrative of the loss of the American Brig Commerce wrecked on the Western Coast of Africa in the Month of August 1815 with an account of the sufferings of her surviving officers and crew who were enslaved by the Wandering Arabs, on the Great African Desert, or Zachariah; and observations, historical, geographical, etc., made during the travels of James Riley, while a slave to the Arabs in the Empire of Morocco.

For Lincoln, who would barely leave the United States in his lifetime, this was his first exposure to the Arab world and one that would have a profound influence upon him. While it is doubtless that the antislavery sentiment of the book left a lasting impression upon the young Lincoln, so too did the descriptions of the nomadic Berber tribe and their customs, who sold Riley and his crew as slaves to Arab merchants. “After some time bartering about me,” Riley wrote, “I was given to an old man whose features showed every sign of the deepest-rooted malignity in his disposition. And this is my master? I thought, Great God, defend me from this cruelty.” Later, as president, Lincoln would list Riley’s Narrative, along with the Bible and Pilgrim’s Progress, as one of the books that most shaped his life and thinking.
Though he had celebrated his inauguration in a banquet hall called the Muslim Palace of Aladdin, Abraham Lincoln was not given to Middle Eastern fantasies. Immediately upon assuming office, Lincoln’s Secretary of State William Seward cautioned the new president that Middle Eastern rulers, “accustomed as they were to wait upon power, with respect, and visit weakness with disdain,” would exploit the division in the United States to their benefit. Indeed, James Buchanan’s Minister to the Ottoman Empire, Alabaman James Williams, urged the government there to ignore the Union and recognize the Confederacy.
Lincoln quickly removed the Buchanan appointee to the Ottoman Empire. He replaced him with Edward Joy Morris, a Pennsylvanian, who suggested that a naval force be stationed outside Constantinople to demonstrate American resolve in the region. Lincoln demurred on the stationing of a naval squadron. He assured Sultan Abdul Aziz of his desire to “continue cultivating the friendly relations that have always so happily existed” between America and the Ottomans. Having long battled secessionist movements in his empire, the Sultan needed little persuading. He assured Lincoln of his “friendly sympathies” for the North and his hope that its differences with the South “may soon be settled in such a manner as will preserve the Union intact.” The Sultan also took the extraordinary step on February 25, 1862, of renewing the 1830 Treaty of Commerce and Navigation between the United States and the Ottoman Empire with an addendum forbidding Confederate privateers from operating in Ottoman waters. This was an awe-inspiring feat for the Lincoln administration consumed in its first year by war, and the President proudly announced in his annual message to Congress that “the new commercial treaty between the United States and the Sultan of Turkey has been carried into execution.”
Despite the success of the treaty, Lincoln and his administration faced several diplomatic standoffs in the Middle East. The first such example concerned a Christian missionary in Egypt. There were approximately 150 documented missionaries in the Ottoman Empire at the outbreak of the Civil War, and Ambassador Morris observed that no one sympathized with the Confederacy. (In fact, some were even abolitionists.) Morris, Seward, and Lincoln regarded the missionaries as a de facto diplomatic corps for the State Department. Missionaries in the Middle East reported Morris “enjoyed a liberty of conscience that is not accorded to dissenters from the established faith in some of the most enlightened kingdoms of Europe.” His boss, Secretary of State Seward, stated that the missionaries enjoyed the President's support and the support of a “very considerable and intelligent portion of the people of the United States.”
Lincoln soon found his administration embroiled in a controversy over one missionary in particular, who was stationed in Egypt. Lincoln chose to publish the official correspondence concerning the controversy over this missionary to reach a wide audience abroad, an unusual response for diplomatic issues. 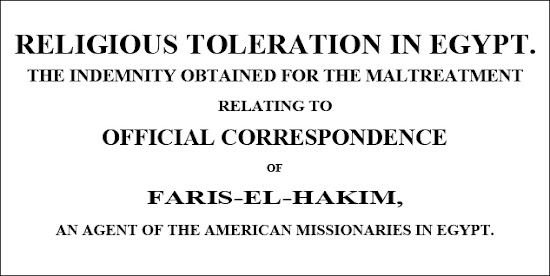 Reportedly, Lincoln’s “likely last words” were published as: “We will visit the Holy Land, and see those places hallowed by the footsteps of the Savior. There is no city on earth I so much desire to see as Jerusalem.”

The following quote originates from Reverend Noyes W. Miner's unpublished 1882 manuscript. Miner was a Baptist preacher, Lincoln's clergyman and Springfield neighbor and friend of the Lincolns. Miner’s actual quote reads: “He was saying there was no city on Earth he so much desired to see as Jerusalem; and with that word half spoken on his tongue, the bullet from John Wilkes Booth's pistol entered Lincoln's brain.” The quote originates from Miner's unpublished 1882 manuscript. But Lincoln’s relationship with the Middle East was like his relationship with everyone else, whether they were individuals or nations; honest, principled, governed by integrity and buttressed by the Declaration of Independence. Historian Gary Wills once wrote that Lincoln’s interpretation of the Declaration of Independence as a universal document for all humankind was essential in understanding the president’s wartime foreign policy. “The Declaration gave liberty not alone to the people of this country,” Wills wrote, “but hope to all the world, for all future time. It was that which promised that in due time the weights would be lifted from the shoulders of all men and that all should have an equal chance as Mr. Lincoln said.”
Lincoln’s “new birth of freedom” still does not exist in many parts Middle East today. Nevertheless, there still stands in that region several monuments to the man who dreamed that someday he would visit the Holy Land in that corner of the world.
By Dr. Jason H. Silverman
Edited by Dr. Neil Gale, Ph.D.
Presented by Dr. Neil Gale, Ph.D. at 2:07 AM