What Happened to the Boots Lincoln was Wearing the Night he was Shot?

One of the most valued treasures presented to the Chicago Historical Society was a coat which affidavits attest is the garment worn by Abraham Lincoln on the night of his assassination.

In 1924, there came to light in Philadelphia several pieces of wearing apparel said to have been worn by Lincoln on that fateful night. The items displayed were: "An old black suit, the collar stained with the lifeblood of the martyred President, the trousers wrinkled, and a badly torn overcoat. The clothes were sold for $6,500 ($25,200 today).
The gloves and handkerchief which Lincoln Is said to have with him on the night of April 14, 1865, were exhibited in New York City in 1924.
In 1859, while on a visit to Springfield, Illinois, Lincoln ordered boots from Conrad Loch, reputed to be the finest bookmaker in America. The Moroccan leather boots cost $19.50 ($633.00 today), and Abe put down a $10 deposit. A good pair of boots cost $12.50 ($405.00 today). It took 10 months to make them, and he wore them during his campaign for the presidency and at his inaugurations. Indeed, in 1865, the night John Wilkes Booth shot President Lincoln, he was wearing Conrad Loch's maroon and black Russian Calf boots.
Peter Kahle, a humble German immigrant, a shoemaker from Scranton, Pennsylvania, thought he could make a pair of comfortable shoes for his President. He was a modest man and worked from a store basement but advertised it as the "largest boot and shoe establishment in the County." Using the diagrams as a template, he crafted a pair of shoes then sent them to Lincoln by way of a present from a humble admirer. The boots fitted perfectly, and Lincoln was delighted and sent a personal thank you letter to Kahler. The shoemaker was no fool, and the Presidential letter of recommendation was published, making Peter Kahler a celebrity shoemaker. Henceforth he promoted himself as 'Doctor Kahler, official bootmaker to the President.'"
During the Civil War (1861-1865), it was challenging for the President to find private time for a boot fitting and almost impossible for a bootmaker to have an audience with the Commander in Chief. Lincoln was determined, however, to have comfortable boots and sent for Dr. Kahler to attend him at the White House. Several conditions included that he must never talk of their meeting, not even to his family. The President's instructions to Dr. Kohler were to follow the Native Indian method of moccasin measurement, i.e., stand barefoot on a piece of rawhide and with his hunting knife cut out the sole, following the contour of the foot. The President pulled off his boots, stood upon the sheet of thick brown paper, and Dr. Kahler outlined the feet. After the diagram was concluded, the President signed and dated it to show his approval. President Lincoln's right foot was half an inch longer than his left foot.
An article in the "Superintendent and Foreman" appeared in 1895, setting forth the story of how a man in Lynn, Massachusetts, had come in possession of the boots Lincoln wore to Ford's Theatre that fateful night.
William T. Clark, a 23-year-old army clerk, rented the back bedroom on the first floor in the Petersen's boarding house across the street from Ford's Theatre. Clark found the Conrad Loch boots under his bed after removing Lincoln's body. Clark had just lost his job and used the boots as collateral for a personal loan from Justin H. Hatch (a civil servant at the U.S. Treasury) to go West to the goldfields and seek his fortune.
Eventually, the boots were given to a school teacher, possibly Hatch's granddaughter, who brought them to her classroom every year on Lincoln's birthday for the kids to see, try on and play with. The Conrad Loch boots were finally obtained by the National Park Service in 1947.
Kahler's boots remained Lincoln's favorite, and he was buried wearing a pair.
If only the stovepipe hat that Lincoln wore that night to the theatre could be located.
Compiled by Dr. Neil Gale, Ph.D.

After Lincoln's assassination, Mary Lincoln bequeathed the coat to Lincoln's favorite doorman, Alphonse Donn. The Donn family held the coat for over a century, allowing curious visitors to cut swatches of the bloodstained lining. Eventually, souvenir seekers did so much damage that the sleeve separated from the body of the coat. Because of its fragile condition, the coat is not currently on display, but the Ford's Theatre Museum contains a replica. 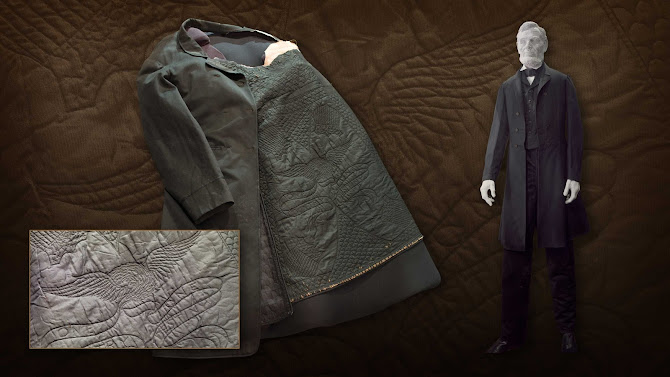