Three workmen plunged 43 floors (of the final 64-floors when completed) on September 15, 1961, in the fall of a scaffold-elevator inside the core for the east tower (completed before tower 2) at the new Marina City (aka Marina Towers) apartment project (converted to condominiums in 1977).

The victims, all carpenters, were going up the core shaft with forms for concrete when the scaffold slipped off a hoisting cable hook from which it was suspended. A workman 5-feet above them was the only person who saw the scaffold fall.
FIRST TO DIE ON JOB
The dead were identified as James R. Toner, 24, of 10605 Throop street; Wallace E. Kumpula, 42, of 3231 N. Racine avenue; and Homer Fields, 33, of 8911 Normandy Avenue, Oak Lawn.
They were the first fatalities in the construction of the twin 64-story apartment towers on the north bank of the Chicago River between State and Dearborn streets. The towers are destined to become the first large circular apartment buildings and the world's tallest (at 588-feet each) reinforced concrete structures.
"We were raising forms inside the core and I was about 5-feet above them," said Mike Einsele, 26, of 7206 S. Western avenue. "They were standing on the scaffolding, and I guess a cable slipped. I heard a loud noise and I turned around to look. The bodies bounced crazily, hitting one obstruction after another until they hit bottom. I heard the thuds when they hit and I got sick. I got out of there then."
FOREMAN IN PERIL 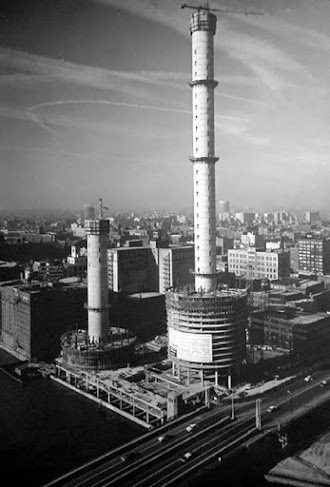 A carpenter foreman standing on a ladder above the scaffold had a narrow escape. The ladder, which was supported by cables at the 46th floor and extended below the 43rd-floor level, was jerked from under him when hit by the falling platform.
"I grabbed a beam right there and hung on," said Ed Schreck, 32, of 3024 Jonquin lane, Downers Grove. "I thought I was a goner, for sure, but I wasn't going to let go. An ironworker on a deck at that level worked his way over and got hold of by back and dragged me up to the deck."
ONE WORKER STEPS ASIDE
Will Bridges, 42, of 6039 Vernon Avenue, said he was 10 stories below the scaffold level and had stepped out of the line of the scaffold's fall to get a drink of water. "Everyone inside the core heard them fall," Bridges said.
Lee Bronson, superintendent for the McHugh Construction Company, general contractor, directed workmen who dug into debris at the bottom of the core to recover the bodies. All were taken to Henrotin Hospital, where they were pronounced dead.
James McHugh, an officer of the company, said the hook holding the scaffold sling had apparently moved or tilted in such a way that the sling slipped off the hook. He said the heavy wooden forms being taken up on the elevator may have jammed along the wall on the way up, causing tension on the hook and possibly bending it enough to permit the cable to slip off.
CALLED A FREAK ACCIDENT
"One of the workers heard a carpenter on the scaffold say, just before the fall, 'It jammed a bit'," McHugh said. He described it as a freak accident that did not involve any structural failure or failure of safety devices.
All workmen were called out of the core and work was halted for the day after the tragedy. One workman on the project, unable to find his brother who also worked there, rushed to the hospital and identified one of the dead men as his missing brother. A few minutes later, the brother was found safe at the building site.
Compiled by Dr. Neil Gale, Ph.D.
Presented by Dr. Neil Gale, Ph.D. at 4/01/2021 10:06:00 PM