On July 2, 1863, the second day of the Gettysburg battle raged between Confederate General, Robert E. Lee’s Army of Northern Virginia and George Meade’s Army of the Potomac.
The Confederate and Union armies faced each other a mile apart in two sweeping parallel arcs. The Union forces were deployed along Cemetery Ridge to Culp's Hill, forming the shape of a fishhook, while the Confederates were spread along Seminary Ridge. Confederate killed, wounded, and missing during the fighting on July 2 total some 6,500. The Union total was approximately 8,750—an unusual case of the defender suffering more casualties than the attacker. The battles fought that day are some of the most famous in military history.
President Lincoln arrived at the War Department telegraph office early that morning to monitor the battle in Pennsylvania.
On July 2, 1863, while Mary Lincoln was traveling on Rock Creek Road near Mount Pleasant Hospital, from the presidential summer retreat, the Soldiers' Home back to the White House, the driver’s seat of the presidential carriage became detached, throwing the driver to the ground. The frightened horses began to run, and Mary leaped from the carriage to save herself. 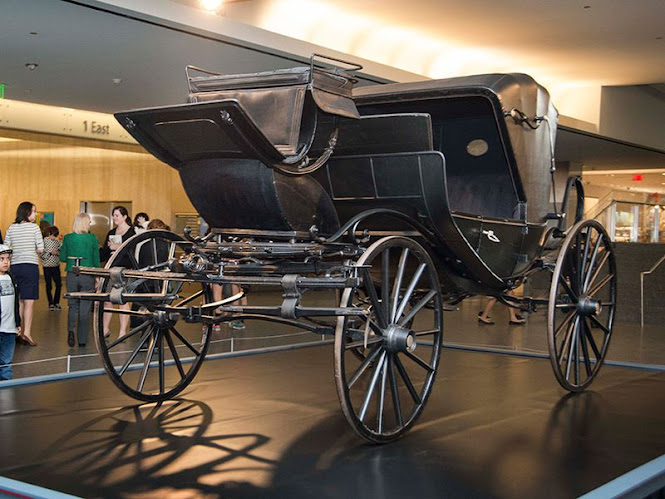 The accident occurred near Mount Pleasant Army Hospital where the road bent into Fourteenth Street. A little past that was Carver Army Hospital — just about where Mary Todd Lincoln hit the ground. Help rushed to her immediately. She was personally cared for by Dr. Judson C. Nelson, a surgeon with the Seventy-Sixth Regiment of New York Volunteers, who was on temporary assignment to the U.S. General Hospital Department in Washington. The name of this doctor was discovered because a newspaper reporter of the day erroneously printed his first and last name.
Mary's accident was a minor event of the day and was given only one-paragraph briefs in the Washington newspapers. The papers reported that she was stunned, bruised, and battered, but her injuries, which were immediately administered to, did not appear too serious. She did suffer a gash to the back of her head, apparently caused by a sharp stone, which doctors stitched up.
All this was going on while the President was monitoring the Battle of Gettysburg.
As was common then, Mary's wound became infected and had to be lanced on July 9 to release the large amount of pus that had built up. By July 20, the First Lady was sufficiently healed to leave Washington and head for the White Mountains of New Hampshire.
Afterward, the first lady, a victim of severe migraine headaches her entire adult life, had them with greater frequency. Robert Lincoln later told his aunt that his mother never fully recovered from her head injury.
Speculations:
Here are some other thoughts about Mary Lincoln's carriage accident.
From what I gathered, the Lincolns had continued "issues" with the stable personnel. These issues involved behaviors such as excess drinking, tardiness, and not carrying out requests. It is told that Lincoln once asked one of the coachmen to get the morning paper. Although the coachman told Lincoln he'd do it, he didn't because he didn't think it was 'his job to run errands.' Lincoln was not pleased.
Coachman Patterson McGee was fired by Mary Lincoln on February 10, 1864. That night there was a suspicious fire in the White House stables that tragically killed several horses and ponies, one was Willie's pony (William Wallace Lincoln was 11 years old), who died on February 20, 1862. McGee was arrested but released because of a lack of evidence. It seems likely there were ongoing issues between the stable personnel and Mary.
So who loosened the bolts on the driver's seat? Why was it done? Could have it been some sort of assassination attempt? There may be other possibilities. Perhaps the coachmen themselves had an argument, and one secretly tried to give another a "surprise jolt." Perhaps the anger was actually directed at Mary, and this was a purposeful attempt to hurt her.
The accident remains suspicious. But the possibilities and speculation that it was an assassination attempt seem plausible.
Compiled by Dr. Neil Gale, Ph.D.
Presented by Dr. Neil Gale, Ph.D. at 4/07/2021 02:07:00 PM