The Great Epizootic; an equine influenza in 1872-1873 starting in Canada, and killed horses all over North America.

Bloomington, Illinois' streets were eerily quiet for several weeks in late November and early December 1872. Horses were missing from the normally bustling downtown and surrounding neighborhoods. In the age before the internal combustion engine and the automobile, it was challenging to get from here to there without flesh-and-blood horsepower.
The Great Epizootic, which had already ravaged the East Coast and major inland cities such as Chicago, had finally reached Bloomington. Nearly every horse, mule, or donkey for miles around was sick or dying, relegated to barn or stable until the highly virulent strain of equine influenza burned through the area.
It was over, and it was challenging to shuttle passengers and goods from railroad depot to factory, store, or home since dray and omnibus lines (respectively, delivery trucks and taxis of the day) had no healthy animals. Public transportation also halted, given that horses in Bloomington-Normal and hundreds of other communities were needed to pull street railway cars. (This was before the electric era.)
The equine influenza was known as the horse flu or, more popularly, the horse epizootic (a word for a non-human epidemic). Symptoms included fever and shivering, a nasty cough, and a yellowish discharge dripping from their nostrils and mouths. For several days or more, infected horses would be listless, with heads cast down and little interest in either food or water, unable to pull or carry loads. 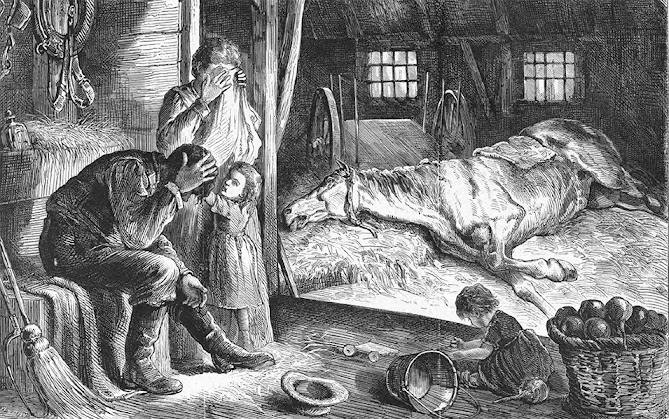 The 1872 North American epizootic was its most recorded outbreak in history.
Equine influenza first appeared in late September in horses pastured outside of Toronto. Within days most animals in the city's crowded stables caught the virus. The U.S. government tried to ban Canadian horses but acted too late. Within a month, border towns were infected, and the "Canadian horse disease" became a North American epidemic. By December, the virus reached the U.S. Gulf Coast, and in early 1873 outbreaks occurred in West Coast cities. It was still sweeping through Arizona Territory settlements as late as March 1873. The epizootic eventually reached Cuba, Mexico, and Central America.
At this time, the germ theory of disease was still controversial, and scientists were 20 years away from identifying viruses. Horse owners had few good options for staving off infection, and they disinfected their stables, improved the animals' feed, and covered them in new blankets. One wag wrote in the Chicago Tribune that the nation's many abused and overworked horses were bound to die of shock from this sudden outpouring of kindness. At a time when veterinary care was still primitive, others promoted more dubious remedies: gin and ginger, tinctures of arsenic, and even a bit of faith healing.
The percentage of horses infected in the continental U.S. is placed anywhere from 80 percent to the high 90s. Mortality rates were highest in urban environments, reaching 10 percent in some cities. However, more often than not, the 1872 outbreak killed between 1 and 2 percent of the horse population in any given community.

Every aspect of life was disrupted. Saloons ran dry without beer deliveries, and postmen relied on "wheelbarrow express" to carry the mail. Forced to travel on foot, fewer people attended weddings and funerals. Desperate companies hired human crews to pull their wagons to market. Worst of all, firemen could no longer rely on horses to pull their heavy pump wagons.

When equine influenza decimated Chicago's horses in 1872, Field, Leiter & Co. (Marshall Field and Levi Ziegler Leiter) used oxen. "All orders filled promptly and shipped the same day!" they boasted.
The epizootic reached Bloomington the third full week of November. The Daily Leader, a long-defunct Bloomington newspaper, reported on November 22nd that nearly all the horses in the downtown Ashley House stable had a "suspicious cough." There were other ominous signs as well. "One of General [Asahel] Gridley's horses is down and is pronounced a clear case [of the epizootic]," added the paper. "Dr. [Asa P.] Tenney also has a horse that is not expected to live."
The Pantagraph agreed with its competitor that the epizootic was here. "It is now estimated that about 200 horses have been attacked in this city within three days," announced the paper's November 23rd edition.
Oxen unaffected by the epizootic were drafted into service, and human muscle often supplanted horsepower for two long weeks. "Many of the grocery merchants are delivering groceries with wheelbarrows and handcarts," commented the November 29th Leader, "and in some instances, wagons are hauled through the streets by men." Marion Chuse, the chief engineer of the Bloomington Fire Department, announced that horses of engine company No. 1 were out of commission, and in the event of a fire, he called for volunteers to "man the ropes."
Clover Lawn, the residence of David and Sarah Davis on the city's east side (now the David Davis Mansion state historic site), was completed in the year of the Great Epizootic. On November 29th, Sarah Davis mentioned the outbreak in a letter to her husband David, then a U.S. Supreme Court justice. "The sickness of the horses makes it inconvenient to get coal hauled — and to save the coal we have on hand — we burn large logs in the furnace," she wrote.
Yet within a week of that letter, influenza's grip on the local horse population began to loosen. Street railway service was up and running by December 7th, and once again, the horse enjoyed dominion over Bloomington's thoroughfares. Thankfully, local fatalities were few, probably numbering fewer than a few dozen in the city.
During the early days of the outbreak, the Daily Leader Newspaper commented on the prospect of life — if only for a week or two — without horses. "The people of this city," the paper stated, "will have an opportunity to learn the value of the noble horse and how much we depend upon 'man's best friend' among the brute creation for comfort and convenience."
MARSHALL FIELD AND COMPANY ARTICLES
Compiled by Dr. Neil Gale, Ph.D.
Presented by Dr. Neil Gale, Ph.D. at 1/07/2021 05:40:00 AM