Fort Lincoln was established to protect the B&O Railroad and the Baltimore Turnpike on the eastern edge of the District of Columbia in Colmar Manor, Maryland. Fort Lincoln was situated between Fort Thayer and Battery Jameson in the defensive ring around Washington D.C.[1].
A Union Civil War earthworks fort was established in 1861 in Northeast Washington D.C. and named after President Abraham Lincoln.
By 1865 the Defenses of Washington DC were said to include some 68 named fortifications, 93 detached batteries, 20 miles of rifle pits, blockhouses at three key points, and 32 miles of military roads. At the beginning of the civil war, there was only a single fort, Fort Washington, protecting the city.
Fort Lincoln was a bastioned fort with four faces that mounted one 100 pounder Parrott and four 20 pounder Parrott guns as well as a number of other major pieces of artillery.
A May 17, 1864 report from the Union Inspector of Artillery noted the following: 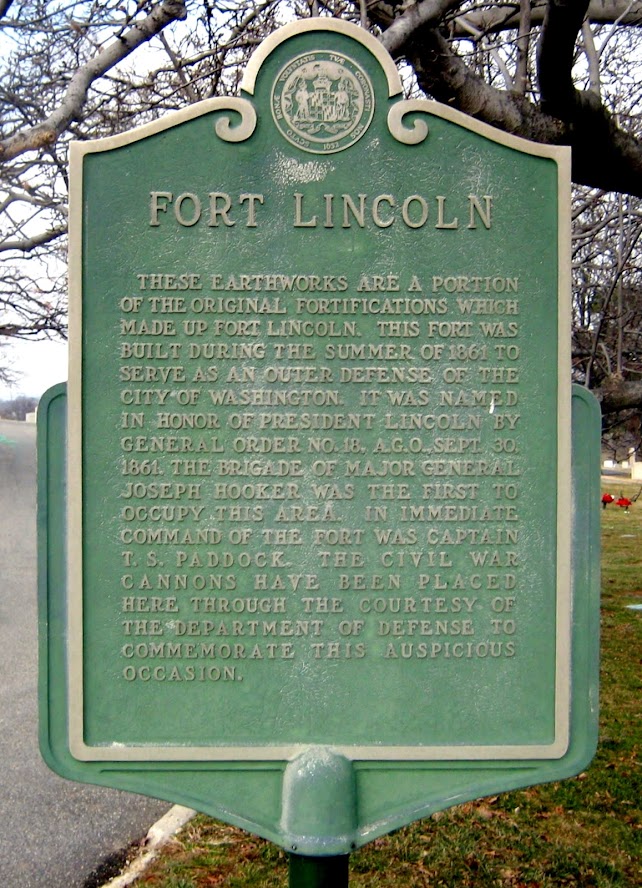 Inscription. These earthworks are a portion of the original fortifications which made up Fort Lincoln. This fort was built during the summer of 1861 to serve as an outer defense of the city of Washington. It was named in honor of President Lincoln by General Order No. 18, A.G.O., Sept. 30, 1861. The brigade of Major General Joseph Hooker was the first to occupy this area. In immediate command of the fort was Captain T.S. Paddock. The Civil War cannons have been placed here through the courtesy of the Department of Defense to commemorate this auspicious occasion.