Constructed in June 1872 by Companies B and C of the 6th U.S. Infantry to protect the construction of the Northern Pacific Railroad. The initial post was located on a high bluff overlooking the confluence of the Missouri River and the Heart River and was known as Fort McKeen. Fort McKeen, named for Colonel H. Boyd McKeen, who was a Pennsylvanian officer and brigade commander killed at the Battle of Cold Harbor during the Civil War, was built as an infantry post with three blockhouses and a partial palisade, unsuited for cavalry operations. It was soon realized that the mission required mounted cavalry and that the new post was unsuited for those troops. 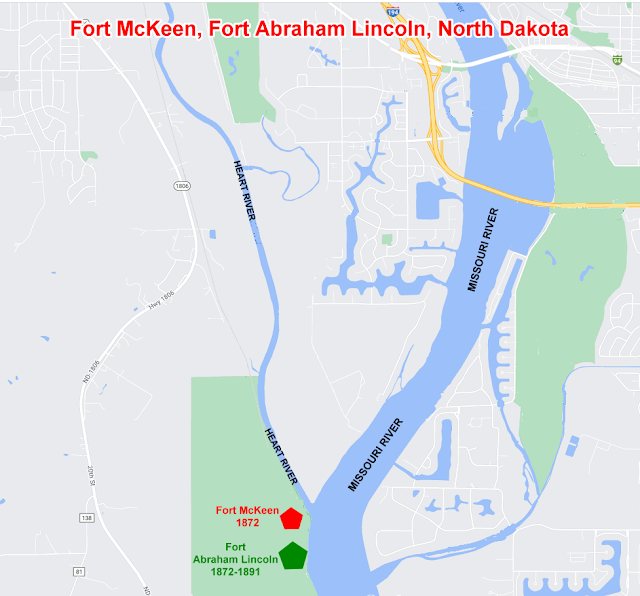 A second post, Fort Abraham Lincoln, was constructed just south of Fort McKeen. The new post was begun in late 1872 as a six-company cavalry post and on March 3, 1873, Fort Abraham Lincoln was authorized by act of Congress. The newly created fort encompassed both the infantry post and the cavalry post.
Fort Abraham Lincoln was built to protect the Northern Pacific Railroad[1] and to contain the local Indian tribes, including the Sioux. A post office also operated at the fort.
The first commander of the combined post was Lieutenant Colonel (brevetted Major General[2]) George Armstrong Custer. Custer had fought in the Civil War in the 1860s and had been given the temporary rank of “General” at that time. The commander’s house at Fort Abraham Lincoln was very large and fancy. It had a bathroom, expensive carpets, drapes, and fine furniture.
By 1874 the fort housed nine companies with about 650 men, three companies of the 6th Infantry, and 17th Infantry, and six companies of the 7th Cavalry. The fort was among the largest and most important on the Northern Plains.
The Lakota were made up of several bands that were related to the Dakota nation. In 1876, Lakota leaders Sitting Bull, Crazy Horse, Rain-in-the-Face, and Gall led a large band of Lakota to Montana to hunt bison and celebrate a summer feast. The U.S. government ordered the Indians to return to their reservations, but they ignored this order. The Lakota were angry about treaties being broken and their lands being taken over by settlers and gold seekers. The Indians were forced to live on reservations. Provisions promised to them were often not available.
The Army ordered troops to Montana to move the Lakota back to their reservations. On May 17, 1876, Custer and his troops prepared to leave Fort Lincoln. Giovanni Martino (John Martin), Custer’s Bugler, details the brigade’s make-up and disposition. "The troops for this expedition consisted of twelve troops of the Seventh Cavalry, four companies of infantry, ten of fifteen Indian scouts, and twenty-five or thirty civilians. We took the field at 6:30 AM 'Boots and Saddles' was sounded, and at 7 AM, stand, horse, and mount was called. Then we passed in review and bade farewell to our friends and though the band was playing "The Girl I Left Behind Me," it seemed like a funeral procession.
American Marching Song:
"The Girl I Left Behind Me."
Then they started off for Montana. Libby Custer and other officers’ wives rode with the troops part of the first day. Then they stopped to say their goodbyes. Later they played Custer’s favorite tune, “Garyowen” [Garry Owen].”
"Garyowen" - Song of the 7th Cavalry
Martin continues, “After leaving the post, the march was taken up in columns of fours, route step, General Terry and staff in the front, followed by General Custer and staff (Mrs. Custer rode on the left of the General). That day we made Little Heart River and camped for the night. After pitching camp assembly was sounded (I was a bugler) and we fell in for payment. It was a pretty sober crowd, everybody felt the position we were in. Some made deposits for their money, and I, for one, put $50 with the Paymaster. The next morning general call was sounded at 6:30, boots and saddles at 7, and we took up the march again. The paymaster went back to Fort Abraham Lincoln.”
The Indian tribes had come together at the Little Bighorn River at the behest of Chief Sitting Bull to discuss what to do about the white man.
Scouts who were sent ahead came back and reported to Custer that there were huge numbers of Indians camped beside the Little Bighorn River (the Lakotas called this river the Greasy Grass). Custer did not believe that there could be so many. He decided to go ahead and attack without waiting for the two other units. 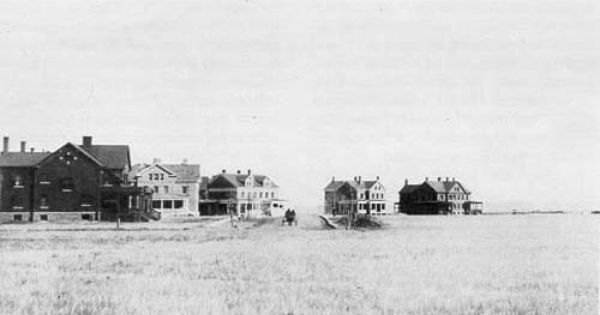 Custer's command came upon this large encampment, he split his forces into three battalions and attacked. A series of missteps and an underestimation of Indian strength caused the initial attack by Major Marcus Reno to falter then fail. Thousands of Indians then attacked the remaining men who were forced to ground by the overwhelming force. Custer and all his men were killed in the final stand. Other units also failed to defeat the Lakotas and their Cheyenne Indian allies.
Wounded soldiers from the other units were quickly taken to the Yellowstone River where the steamboat "Far West" was waiting with supplies. The boat’s pilot, Captain Grant Marsh, steamed as fast as he could back to Bismarck. Ten days after the battle, the Far West reached Bismarck, and word quickly spread that over 250 men had lost their lives.
Though the Lakota had defeated the U.S. Army in battle, they knew more soldiers would come after them. They left the Greasy Grass River. Several bands traveled all the way to Canada where they were safe from the U.S. Army.
It seemed like everybody criticized Custer for being reckless and leading his troops to death. Libby Custer wanted people to believe that her husband was a brave hero. She spent the next 57 years, until her death at age 91, writing books, articles, and letters defending her husband’s memory.
Fort Abraham Lincoln remained the headquarters of the 7th Cavalry until June of 1882 when the 7th and its headquarters were transferred to Fort Meade in South Dakota. After the railroad to Montana was complete the fort gradually declined in importance and was finally abandoned in 1891.
After the fort was abandoned, settlers took apart the buildings and used the lumber to build houses and farm buildings. They also made good use of other items they found, like the fancy bathtubs in the officers’ quarters made good feeding troughs for the farmers’ pigs.
At its height, Fort Abraham Lincoln had 78 separate buildings. Many of those original buildings were dismantled by settlers and used in the construction of homes and farms.
Today, several of the buildings at Fort Abraham Lincoln, including Custer’s house, have been reconstructed. The site is located in Fort Abraham Lincoln State Park near Mandan, North Dakota.
MORE UNIQUE LINCOLN ARTICLES
Compiled by Neil Gale, Ph.D.

[1] The Northern Pacific Railway, founded in 1864, was a transcontinental railroad that operated across the northern tier of the western United States, from Minnesota to the Pacific Northwest.
[2] A brevet was a warrant giving a commissioned officer a higher rank title as a reward for gallantry or meritorious conduct but may not confer the authority, precedence, or pay of real rank. An officer so promoted was referred to as being brevetted.
Presented by Dr. Neil Gale, Ph.D. at 10/27/2020 07:09:00 PM