How the Automobile became King in Chicago.

Almost as soon as automobiles appeared on the streets of Chicago, people wondered whether driving induced insanity.

A Catholic priest on the South Side called it "auto madness." A Tribune headline asked: "Is the Automobile Mania a Form of Insanity?" And Mayor Carter Harrison Jr. remarked, "The natural tendency of a man operating an automobile is to run it at high speed."

Horseless carriages showed up in Chicago as early as 1892. The city hosted the nation's first auto race in 1895 — only two of the seven cars even made it to the finish line, with the winner puttering along at 5 mph. [1] 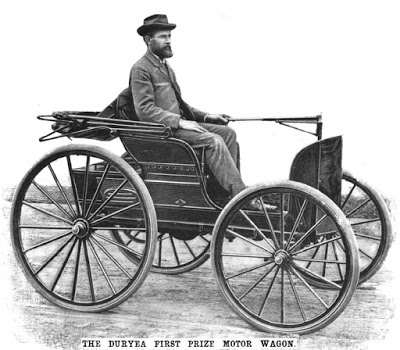 Just a handful of wealthy Chicagoans were driving automobiles around 1899 when the streets were filled with horse-drawn vehicles, streetcars, pedestrians, and bicycles.

Today, cars are the unchallenged kings of the road, but around the turn of the 20th century, the debate was how much these newfangled contraptions should use the roads. A bicycle-loving mayor threatened to crack down on the up-and-coming motorcar.

Chicago was one of the first big cities to pass laws regulating autos, setting the speed limit at 8-mph in 1899. If you wanted to drive, you had to go in front of the Board of Examiners of Operators of Automobiles. These three city officials decided whether you had sufficient "physical ability, mental qualifications, and the ability to understand the working parts of the mechanism." The same board could revoke your license if you showed "carelessness" or "intemperance" behind the wheel.
At first, the city did not put an age limit on drivers. Examiners were "astounded" in September 1900 when 13-year-old Janette Lindstrom applied for a license, and the bright North Sider aced the test and got her license. "Chicago has probably the youngest licensed automobile operator in the world," the Tribune observed. The story of Janette Lindstrom captured the interest of many early automobile owners in Chicago in 1900 when she won some auto races in Washington Park Race Track.[2]

As motorists drove across the city, they were confronted with a patchwork of jurisdictions. Chicago had three major park districts at the time, each covering a separate portion of the city, and each had its own automobile laws. In addition, the city's police monitored the traffic on other streets. One park board tried to ban autos from South Side parks and boulevards in 1899, but motorists drove through them anyway, ringing their gongs as they buzzed past the "sparrow cops," the nickname for the park district's patrolmen.

In 1900, North Siders began hearing "strangely weird and beautiful music" coming from the streets outside their homes in the middle of the night. A few motorists were holding "automatic midnight musical parties," going for rides with friends and playing music boxes as they sped down the empty streets, the Tribune reported.
A less charming noise was more common: the ringing of bells and gongs. A city ordinance required motorists to sound these alarms to warn pedestrians and other vehicles as they approached, but some drivers seemed to delight in scaring people.

"The other day on one of the North Side boulevards, I heard a toot that seemed right behind me," Mayor Harrison remarked in 1902. "I jumped about six feet and then looked around. The machine was fully a half-block away, and when it went past, all the occupants grinned as if it were a good joke. These fellows blow their horns just to see the people jump, I believe."

Chicagoans called automobiles "buzz wagons" and "devil wagons." Reckless drivers were "scorchers," a word that originally described speeding bicyclists in the 1890s. "Auto Scorchers are a Terror," the Tribune declared in 1902 — at a time when about 800 people in a city of 1.7 million had automobile licenses.

The mayor, an avid bicyclist, threatened to crack down on motorists. "There are several young fools, who have more money than brains, who are running these automobiles over the boulevards at express time speed, and they are going to get into trouble," Harrison said.

Automobilists said the criticism was unfair.

"We are treated like a lot of hoodlums," said Frank P. Illsley, a member of the elite Chicago Automobile Club. "We can't ride through the park, but one of the sparrow cops comes after us and waves his hand to tell us we should slow up. Ten years or more ago, everybody had it in for the bicycle riders. Now they are against the auto owners."

In those early years, the police didn't have any motor vehicles of their own to chase after speeding cars. And they had no easy way of identifying motorists or automobiles. In 1901, the city required motorists to wear metal badges displaying their license numbers. And then, a hit-and-run accident injured a park police officer in December 1902, spurring the City Council to require identification numbers on autos.

"You might as well insist that every man in Chicago should wear a number," complained Chicago Automobile Club President Charles Gray. "You wait until you catch a thief before you number him. You want to number us like convicts. When we do wrong, let the police catch us."

A motorist sued, saying he had a constitutional right to drive his car on the public streets, and in 1904 an Illinois appellate court said he was right.

Despite the ruling, the City Council approved a new ordinance spelling out more details on what it took to qualify for a license. You had to be at least 18, with "the free and full use of both arms and both hands." You had to have good hearing and eyesight and be free from epilepsy, heart disease, alcoholism, and drug addiction. "Applicants must be not of reckless disposition nor subject to fainting fits," the law noted.

The Chicago Automobile Club fought the law, and a judge blocked the city from arresting club members for driving without identification numbers on their vehicles. But in 1905, an appellate court threw out those injunctions, clearing the way for the city to enforce its laws.

By that time, motorists flocked to Sheridan Road, using the suburban thoroughfare for outings through the North Shore. Police in Evanston and Glencoe used stopwatches to figure out how fast they were going. Evanston police Officer Arthur Johnston fired a revolver at one speeding car, puncturing a tire. "Those people were lawbreakers, and Johnston had a perfect right to do what he did," Evanston police Chief Alfred Frost said.

After Glencoe installed a speed bump on Sheridan, about 100 people gathered and cheered as cars were jolted by the unexpected obstacle. One chauffeur was thrown out of a car as it hit the hurdle. "There's nothing too bad for these pirates up here," fumed the auto's owner, George Rust of Highland Park.

The confusion over the multiple jurisdictions started to clear up in 1907 when Illinois began registering autos and issuing statewide license plates. Chicago continued requiring its own city license until the Illinois Supreme Court stopped the practice seven years later.
Chicago's first "auto court" began hearing cases on June 5, 1912. Municipal Judge Hugh Stewart predicted that tough enforcement would bring a swift end to dangerous driving. "There will be no automobile or motorcycle speeding in Chicago at the end of 30 days," he said. "There have been too many deaths in Chicago lately from cases of this kind, and we are determined to put a stop to such disregard for life."

[1] It wasn't long after the 1895 Jackson Park to Evanston motor race that automobile dealers began appearing on the Chicago scene. Until the first few years of the 1900s, most were also manufacturers who sold the cars they built in their own garages.
By 1902, when 1,500 Ramblers and 2,500 Oldsmobiles sold nationwide, dealers had begun springing up to sell cars made by the first major manufacturers. Believed to be the first car dealer; Hagmann & Hammerly Locomobile dealership at 931 Van Buren St., Chicago, existed before 1905, and today, would be considered a Car Broker.
[2] Miss Janette Lindstrom was the daughter of Swedish-born Charles Lindstrom, a trained engineer, and his wife Augusta, who came to Chicago in 1894 in a quest to get involved in the automotive industry. Here he met and formed a partnership with John Hewitt, and they created the Hewitt-Lindstrom Company (1900-1901), located at 347 N. Wabash, to produce a Stanhope style electric vehicle. Prior to the 1900s, almost all automobiles were electric, often with two motors, one for the front wheels and one for the back wheels.

Early in 1900, Charles taught his 13-year-old daughter Janette how to drive. He took her to get her driver's license. It was the first year the City of Chicago had examinations to procure a driver's license. The test was administered by E.R. Ellicott, a Chicago electrician who was a written exam with no on-the-road test.

She passed with flying colors, and Ellicott noted that her father had personally taught Janette to drive and that she already had three months of driving experience.

On Friday, September 21, 1900, Janette participated in the Inter Ocean International Automobile Exhibit and Races at Washington Park Race Track. Miss Janette Lindstrom beat Miss M.A. Ryan in the Ladies' two-mile race for private owners and operators; Janette wins the gold medal in 7:12 minutes, an average of 16.85 miles per hour.
Miss Ryan claims that the firm to whom she left the order of recharging the batteries did not fill them to their capacity. Consequently, Miss Ryan has challenged Miss Lindstrom for another race set for Saturday the 22nd.
Miss Lindstrom has accepted. Management declared that in running the race over again, any other woman with an electric automobile must be admitted.

In the special Ladies' 2-mile rematch race on Saturday, Miss Janette came in 2nd place, with Miss Ryan winning 1st place in 6 minutes and 43 seconds, an average of 18.66 miles per hour. She was driving a Hewitt-Lindstrom vehicle too.

Last but not least, the Five-Mile ladies 'free for all (any type of vehicle) race was won by Janette Lindstrom, wearing a straw hat with flowers, with a time of 12 minutes and 42 seconds, an average of 23.62 miles per hour.
NOTE: Janette's name is misspelled online as Jeannette or Jeanette. The auto race dates are also incorrect online showing 1901 as the year.
Presented by Dr. Neil Gale, Ph.D. at 6/12/2020 01:31:00 PM