Henry Ford receives most of the credit for the development of the car in the U.S., however, he did not produce the first American motorcar. This distinction goes to the Duryea brothers -- Charles and Frank -- who created their first gasoline-powered "horseless-carriage" in 1893. Like the Wright brothers, the Duryeas were bicycle mechanics with a passion for innovation.

Founded by Charles Duryea and his brother Frank, the Duryea Motor Wagon Company built their first Motor Wagon, a one-cylinder four horsepower car, first demonstrated on September 21, 1893, in Springfield, Massachusetts. It is considered the first successful gas-engine vehicle built in the U.S.

The race, a 54-mile course from downtown Chicago to Evanston and back, was scheduled to start on November 2, 1895.

The original field featured 83 entries in the race, but 76 of them never made it to the race. The high dropout rate seemed largely due to most of the cars not being finished in time for the contest. Organizers postponed the event for a week.

If the new technology weren't already tricky enough, dealing with the local authorities was even worse. Before pre-race favorite Elwood Haynes and the Benz driver could even get into town, they were stopped by the cops. Their infraction? The police said that they had no right to drive their vehicles on the city streets and the competitors had to requisition horses to pull the cars. Haynes had to drop out when his car was damaged en route and was unable to compete.

Naturally the editors of the Times-Herald flipped out. They postponed the event again, until they could convince the city leaders to pass an ordinance allowing the newfangled vehicles to travel on the streets of Chicago. By this time, the race day had slipped to November 28th, Thanksgiving Day.

Frank Duryea described his experience in his autobiography:


"I started with draftsmen on plans for a new motor wagon (the second Duryea vehicle, a two-cylinder vehicle built in 1894) of which I had, from time to time, been making rough sketches during the past summer. But my work was interrupted by the necessity of preparing a motor wagon for the race promoted by H.H. Kohlsaat of the Chicago Times-Herald. 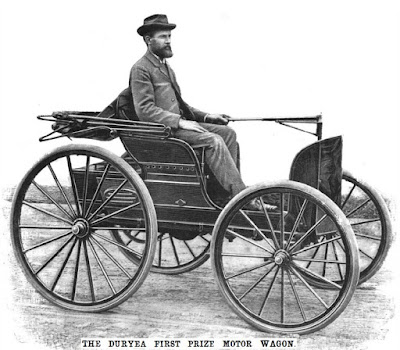 This race was set for November 2nd, and as driver, the Company sent me out to Chicago with the motor wagon on that date. Only the Mueller Benz and the Duryea cars were present and ready to start, so the race was postponed until the 28th. Thanksgiving Day, when it arrived, found me again in Chicago with my motor wagon.

Heavy snow had fallen during the night (and 30° at the start of the race) and we experienced hard going as we drove out to Jackson Park from our quarters on Sixteenth Street.

Of nearly a hundred entries, only six contestants lined up for the start. Of these six, two were electric vehicles entered by Morris and Salom of Philadelphia, and Sturgis of Chicago. Of the four gasoline-engined vehicles, H. Mueller & Go. of Decatur, Illinois, R.H. Macy & Co. of New York, and The De la Vergne Refrigerating Machine Co. of New York, each came to the start with an imported German Benz. The Duryea Motor Wagon Company's entry was the only American-made gasoline vehicle to start. 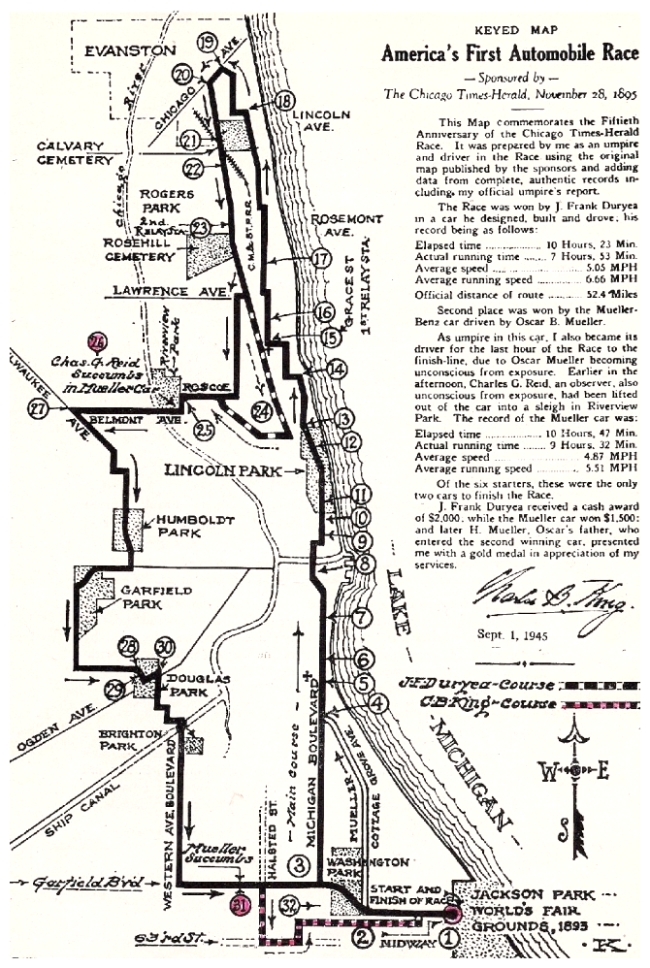 
With me as umpire was Mr. Arthur W. White. The machine made good going of the soft unpacked snow in Jackson Park, but when we came to the busier part of the city, the street surface consisted of ruts and ice hummocks (a hump or ridge in an ice field), in which the car slewed badly from side to side.

While still in the lead, the left front wheel struck a bad rut at such an angle that the steering arm was broken off. This arm had been threaded and screwed firmly to a shoulder, and it was a problem to extract the broken-off threaded part of the arm. When this was finally accomplished, we, fortunately, located a blacksmith shop where we forged down, threaded and replaced the arm. While thus delayed, the Macy Benz passed us and held the lead as far as Evanston, where we regained it.

Having made the turn at Evanston, elated at being in the lead again, we started on the home trip.

We had not yet come to Humboldt Park when one of the two cylinders ceased firing.

This repair was completed in fifty-five minutes and we got going, feeling that the Macy Benz must surely be ahead of us, but learned later that the Macy did not get that far. Breaking the way through the snow in Humboldt and Garfield Parks proved to be heavy work for the motor, but also indicated that all competitors were behind us.

After a stop for gasoline, and a four-minute wait for a passing train at a railroad crossing, we continued on to the finish in Jackson Park, arriving at 7:18 PM.

The motor had at all times shown ample power, and at no time were we compelled to get out and push.

After receiving congratulations from the small group still remaining at the finish line, among whom were the Duryea Motor Wagon Company party, I turned the motor wagon and drove it back to its quarters on Sixteenth Street.

The Mueller Benz, the only other machine to finish, was driven across the line at 8:53 PM by the umpire, Mr. Charles B. King, Mr. Mueller having collapsed from fatigue and the frigid cold."

Shortly after the start, depending on whom you believe, either two of the vehicles argued over the same piece of road, or one of them, a Benz, ran into a horse cart or was forced off the road by the horse cart. Whatever caused it, one Benz was in a ditch and out of the race. Then another Benz dropped out. 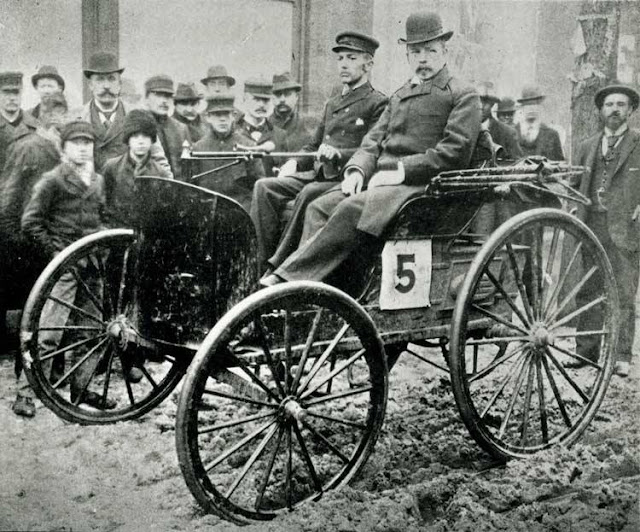 Frank Duryea travelled 54 miles at an average 7.5 mph, in 10 hours and 23 minutes (including repair time) marking the first U.S. auto race in which any entrants finished.

The winner earned $2,000 ($61,000 today), the enthusiast from the crowd. The person who gave the horseless vehicles the new name of "motorcycles" won $500. The Chicago Times-Herald Newspaper that sponsored the race wrote, "Persons who are inclined to decry the development of the horseless carriage will be forced to recognize it as an admitted mechanical achievement, highly adapted to some of the most urgent needs of our civilization."

That same year, the brothers began commercial production in 1895, with thirteen cars sold by the end of 1896. Their first ten production vehicles were the first automobiles sold in the United States.