In 1927, Leonard Japp Sr. and friend George Gavora put $5 down on a rickety Ford delivery truck and bought $22.50 worth of pretzels, nuts, cigarettes, and what saloons needed for sandwiches.

When Japp began in 1927 (the Great Depression didn't start until Aug. 1929), his Japp & Gavora Food Co. took off almost immediately by delivering snacks to saloons, some of them owned by Al Capone. Al was a hands-off owner and had managers running his businesses. All these drinking establishments needed smokes and something to nosh on.

According to legend; When Al Capone came home after a trip to Saratoga Springs, New York—the birthplace of the potato chip—and personally requested that Japp bring the salty potato snacks to Chicago. (Salty snacks resulted in more beer sales.) In December of 1927, Capone moved to the property he owned in Saint Petersburg, Florida, to get away from the heat coming down on him in Chicago.

I sent a message to my friend, Deirdre Marie Capone, [1] Al Capone's Grandniece. Deirdre wrote back:

"I heard that also. My family helped lots of people start businesses that are still going," but she had no knowledge, nor ever heard the name, Mr. Japp.

Within two and a half years, Japp had built frying vats, assembled a fleet of 15 new trucks, and peddled a full line of snack products. But the bubble burst when the Great Depression struck in August of 1929. When they went broke, everyone went broke with them.

During the Depression, Japp, an all-state football and basketball player, sparred with Buddy Baer, the heavyweight who twice lost to Joe Louis for the championship, to pick up a little spare money. But then Japp got back into the snack business.

In 1938, he formed a partnership with George Johnson, a salesman for Kraft. Their firm, Special Foods Co., peddled potato chips, noodles, popcorn, spaghetti, jelly, salad dressing, and Rival dog food. ''The grocery stores were all Ma and Pa then and only a few A&Ps. You could park the truck and make three deliveries at once,'' Japp said.

But Japp and Johnson weren't happy with the way Mrs. Fletcher ran her plant. Around the same time, the partners heard about a new automatic plant in Madison, Wisconsin, that produced a better chip.

''It was nice and light, 1000% better than what we were selling. We decided to go that route, and we were doing great in no time at all,'' he said.

The Madison operation went out of business, and the partners began buying a similar product from Blue Star Foods Inc. in Rockford. But as the business grew, Blue Star said the partners would have to go elsewhere because they were gobbling up too much of Blue Star's chips.

''We had been adding trucks, going like crazy and concentrating on chips, getting rid of other items like dog food and jellies and candy,'' he said.

Forced into manufacturing, the partners bought an $18,000 automatic potato chip maker and installed it at 40th Street and Princeton Avenue in Chicago.

''That's how it got started in 1940. We called it Mrs. Japp's. When Japan bombed Pearl Harbor in Honolulu, Hawaii on December 7, 1941, during WWII, the grocers started calling us immediately, demanding that we remove our Japp chips from their stores,'' said Leonard. 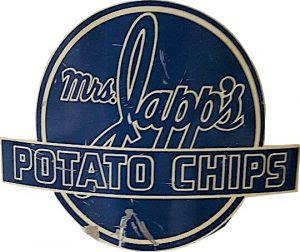 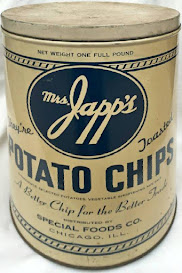 So they sat down and, within a week, came up with more than 30 names to submit for trademark registration. ''We wanted Jax, but it was taken by a brewing company. The name Jays was available, and we renamed the company Jays Foods, Incorporated. It took a couple of weeks, but we started putting tags on plain bags with the Jays name on it,'' he said. 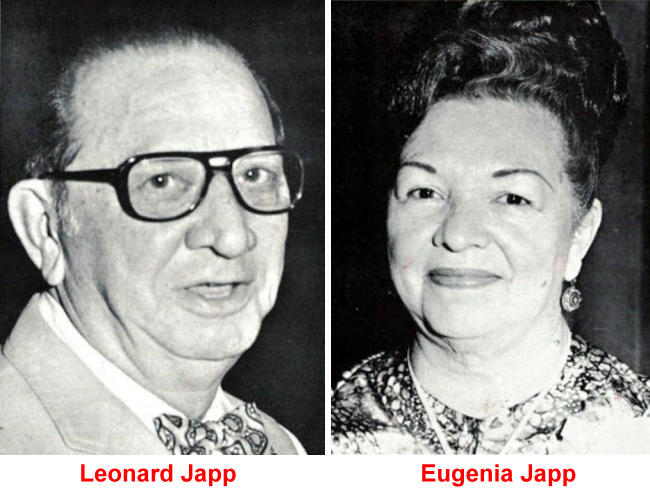 ''We had to buy second-hand cartons during the war. Without stamps, you couldn't buy anything. My wife, Eugenia, and I would travel all over the Midwest—Nebraska, the Dakotas—to barter and exchange for gas and for oil for cooking. We'd buy up all the nylons and trade with those,'' he said.

During or after WWII, some family members changed their last name from Japp to Jepp.

Mrs. Japp, who was a vice president when she died in 1983 at age 72, also was responsible for starting a practice that has been embraced by the food industry. She began putting recipes on the potato chip packages.

''My wife had run a chain of bakeries and was a fine cook. She kept telling us we had a fine product, but we had to tell people how to use it. She came up with a recipe for tuna fish casserole with potato chips,'' he said.

Japp was hard to convince, and so was Blue Star in Rockford. But, as Blue Star's biggest customer, Japp talked them into it, as he put it, ''to get my wife off my back.'' Then everyone put recipes on potato chip bags.

''When the war began, there were about 18 potato chips companies in Chicago. The ones that didn't wheel and deal fell by the wayside,'' he said.

Just before D-Day, Johnson and Japp agreed that they would make a bid to buy the other one out.

At that time, Jays was doing about $750,000 in business a year, only in the Chicago area. They changed the name to Jays Foods and continued to expand the company's distribution in the next five years.

The leading chipmaker at the time was Mrs. Klein's, Japp said. ''Mrs. Klein's only worked the main streets. We worked the side streets. One day, Mrs. Klein's walked out and found we were at her front door. By 1950, we were the top potato chip company in Chicago,'' Japp said.

At about this time, Jays came up with the slogan for which it is almost as famous as Schlitz was for ''The beer that made Milwaukee famous.''

''At food shows, people would write down their comments on our potato chips. The most frequent comment was 'Can't stop eating 'em.' So we began using that,'' he said. Arch rival Frito-Lay, now a subsidiary of giant PepsiCo. Inc. liked the sentiment so much, it started daring the public in 1963: ''Bet you can't eat just one.''

Flushed with success and demand, Jays expanded throughout the 1950s. In 1957, Japp's son, Leonard Jr., joined the firm after six years in the Marine Corps.

''I had always worked at the plant at various jobs. I started when I was 13,'' said Leonard Jr., the firm's president. When he was in the marines, he said, he would work at the company on his leaves.

In the 1960s, Jays switched from tin cans of potato chips to less expensive boxes.

''They used to deliver those cans to the back door, and we'd fill 'em and load 'em out the front door. There's no way you can store that many cans. They just became too expensive,'' the younger Japp said.

Over the years, Jays has added to its snack foods, but potato chips constitute 70 percent of their sales. Pretzels, corn chips, cheese dips, and other products are made elsewhere. Only potato chips and popcorn were made at the South Side plant, at 825 E. 99th St., But that keeps Jays' 400 employees busy on three shifts a day. The company grew to 850 workers.

''We make potato chips and popcorn for the first two shifts. Then the whole place is scrubbed down during the last shift. We like to say that the place is clean enough to eat off the floor. One television reporter did,'' Leonard Jr. said.

Besides the Chicago plant, the firm has 14 distribution plants and 5 distributors in Illinois and parts of Wisconsin, Michigan, and Indiana.

Jays faced a constant battle to get the right amount of shelf space at grocery stores. ''I don't want more shelf space than I can sell in a store, but I want it where I can be representative. Generally speaking, I think we could do more. If you have too much, you have too much spoilage,'' said Leonard Jr.

''We fought them by stressing that our potato chips are all-natural ingredients, made with no preservatives. We use pure polyunsaturated corn oil,'' he said.

''Jays had expanded its original markets into other states to increase its growth and set up distribution centers in areas outside Chicago to reach out farther than if it just was in the Chicago market,'' Cady said. And it's working, he said. ''Overall, the consumer must think they've got a pretty good product because they have grown. There's a certain amount of brand loyalty, and people are apparently loyal to Jays, grown up with Jays, and keep buying that brand.''

COMPANY NAME AND DATE HISTORY
Snyder's-Lance of Hanover bought Jays in 2007 and made a promise not to change Jays Foods methods for the manufacture of their snacks, and so far—so good!

[1] Deirdre Marie Capone is a writer and producer known for Al Capone, the Untold Story, Capone: The Man That Knew Too Much, and The Making of the Mob (2015) IMDb.