Riverview Park Built the Pike Walkway parallel to the Chicago River in 1904.

The Pike Walkway was Riverview's answer to the 1893 World's Fair Midway Plaisance. In 1907, Riverview began constructing the new Marine Causeway, also known as the River Walk, with new attractions. 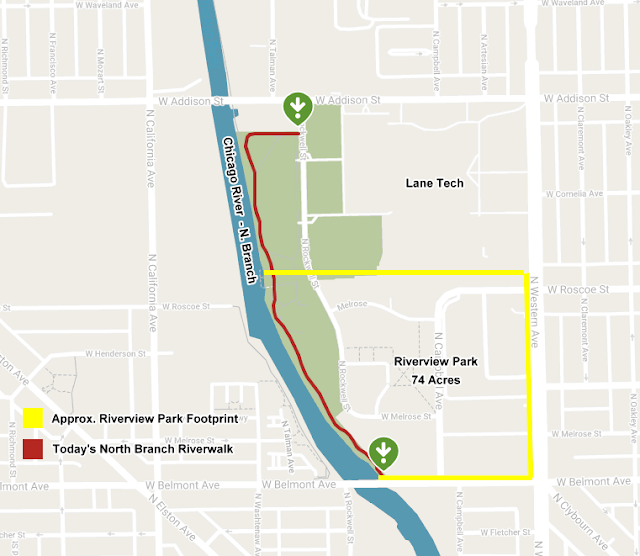 Today it's the North Branch Riverwalk which is marked in red on the map. 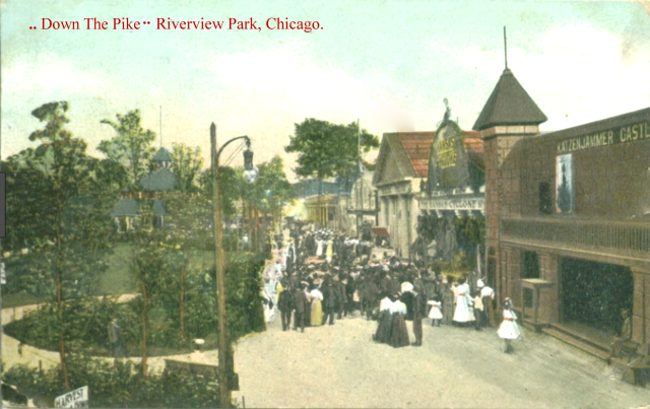 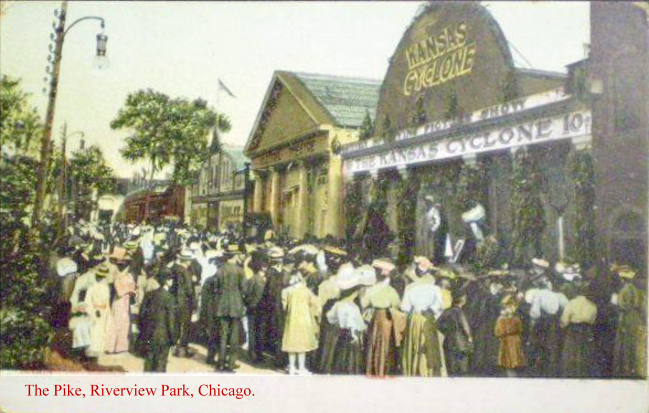 The Katzenjammer Castle. The tickets cost 10¢ each. Visitors would ascend via a moving stairway and be conveyed to the upper floor of the building, which was dark and narrow passages, moving, springing and suspended floors, dark rooms with images of goblins, heads of ferocious beasts with lighted eyes, many kinds of weird and fantastic figures, all so arranged in connections with the noises made, as to produce an effect upon the nerves of the visitors. Having passed through this section of the floor they came to the exit, claimed by the plaintiff to be the only exit from this part of the castle. This consisted of a chute or slide. The chute extended from the outside of the upper story of the building to from, eighteen inches to two and one-half feet from the ground, and was at an angle or pitch of thirty-five or forty degrees.

The Kansas Cyclone was located on the Pike walkway. It was built in 1904 and razed in 1907 to make way for new amusement park rides. The Kansas Cyclone gives visitors a very realistic and safe view of the damage done by a sudden tornado or 'twister.' It is a real storm produced by electricity. Heavy rainfall and a thunderstorm proceed with the windstorm.

The Electric Theatre showed moving pictures (silent films), and was the second most popular attraction at Riverview by box-office receipt at $16,000 ($461,000 today) in 1906.

The Serendipity Jubilee, as best as I could deduce, was a dance show.