UPDATED SATURDAY, SEPTEMBER 23, 2022.
Joseph "Joe" Kromelis is known in Chicago as "The Walking Man" or "The Walking Dude. Kromelis moved to Chicago with his family from Lithuania or Germany as a kid and grew up above the bar his parents ran on Halsted. It was near a ballpark which is still a mystery. His parents sold the tavern and moved to southwest Michigan when he was about 19. But Kromelis stuck around in Chicago. He tried a factory job but didn't like it. He got a peddler's license and sold jewelry on the street. That's when he began wandering the Loop. 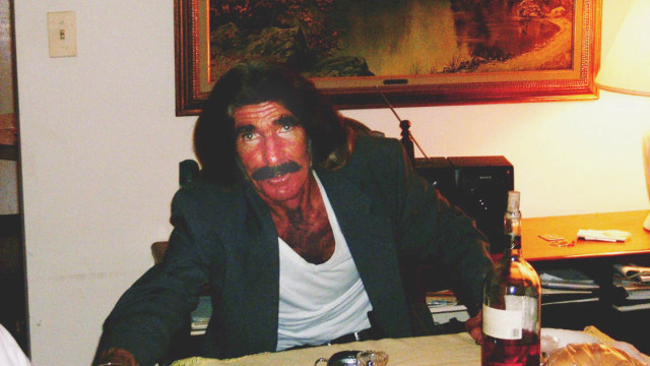 To most of his fellow downtown pedestrians, he was just "Walking Man" or "Walking Dude," a familiar, tall, mustachioed guy who wandered around town in a V-neck T-shirt and a kerchief tucked in the breast pocket of his suit jacket, going who knows where. Occasionally, he'd stop to comb his flamboyant hair.

"There's nothing wrong with him, and he's not mentally ill, and he just likes walking. It's that simple. My husband couldn't figure it out, but he accepted it. That's Joe. He loves the city," his sister-in-law, Linda Kromelis said. 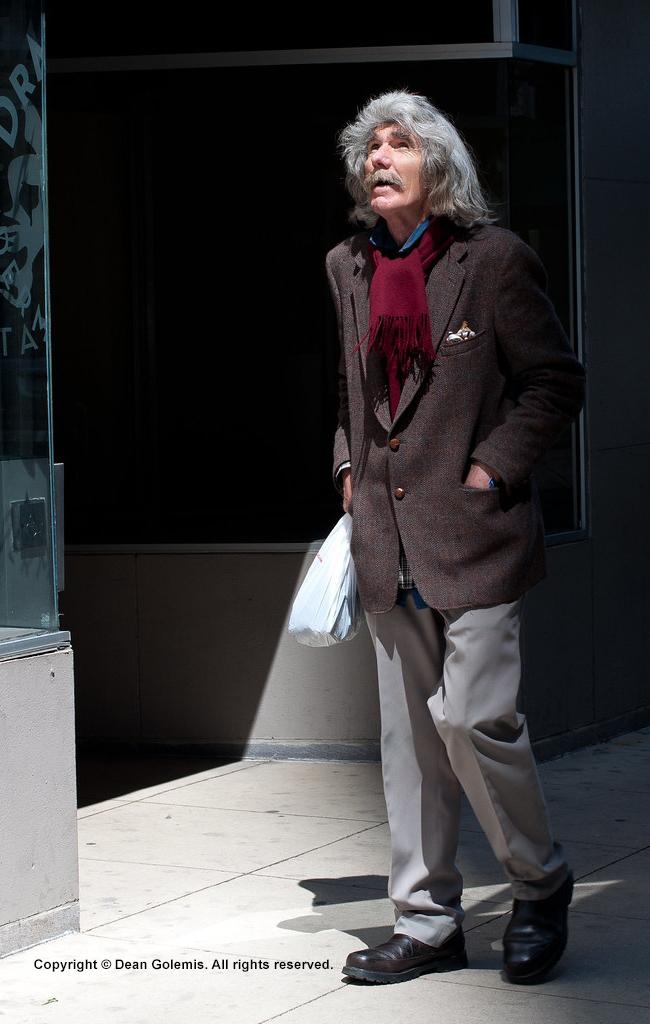 He lived in an efficiency apartment or an SRO (single room occupancy) building in Lincoln Park for about 30 years until he had to leave because it was turned into condos in 2012. He never married and had no children.
Kromelis had been a fixture in downtown street life. Walking north near the Hancock Center, south near the Sears [Willis] Tower, on the Riverwalk, and across the bridges, occasionally in more far-flung areas. He was often seen patiently browsing inside stores on the Magnificent Mile and in Streeterville. He liked peddling jewelry on the streets and preferred to keep to himself. Joe walked the city every day and in every kind of weather. 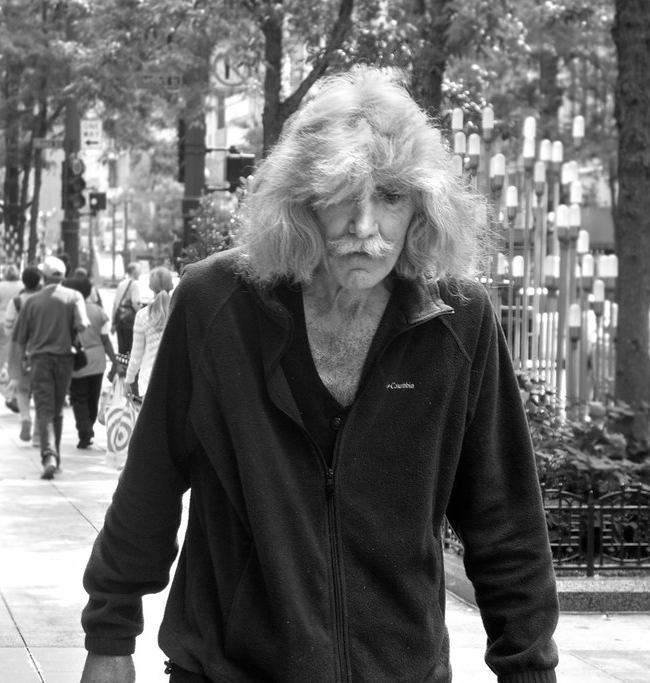 Walking was what Joseph Kromelis was doing around 11 AM on Tuesday, May 24, 2016, when he was attacked. He told police he was on Lower Wacker and said hello to someone he passed. That man began punching and hitting him with a bat, Chicago police said. A police officer responding to a battery call saw the attacker straddled over Kromelis, struggling with the bat, according to a police report. A witness told the sergeant the suspect also tried to throw Kromelis over a railing to the pavement about 20 feet below. Kromelis was taken by ambulance to Northwestern Memorial Hospital to be treated for several injuries, including severe cuts to both eyes, according to the report. He also suffered leg injuries from being hit with the bat. He was listed in fair condition.

Chicago's 'Walking Man' lit on fire, suffering burns to half his body in a second brutal attack in 6 years: 'To single him out for this kind of abuse is shocking and inhuman.'
—Chicago Tribune, Wednesday, May 25, 2022

A 75-year-old man known affectionately to Chicagoans as the “Walking Man,” was in critical condition early Wednesday after someone doused him in flammable liquid and lit him on fire as he lay on the ground overnight on Lower Wacker Drive, according to Chicago police.
Joseph "Joe" Kromelis, who once told the Tribune he “roams as a way of life,” had been resting or sleeping when a man he didn’t know came up to him in the 400 block of North Lower Wabash Avenue about 2:50 a.m., police said.
The stranger doused him with lighter fluid and “then proceeded to ignite the victim before fleeing the scene,” according to a media statement from police.
A security officer working at a nearby building in the Near North neighborhood saw the man engulfed in flames and rushed over with a fire extinguisher, which he used to put the fire out, police said.
Paramedics took him to Northwestern Memorial Hospital, where the man was listed in critical condition. Authorities said he suffered burns “to nearly half his body.” He was scheduled to be transferred to Stroger’s burn unit.
The attacker, who is wanted on suspicion of aggravated battery and arson, took off running west and into the Blue Line CTA tunnel after setting the man on fire.
The attacker, of an unknown race, had a thin build and was wearing a baseball hat, black pants, a black and white hooded “Hoodrich” sweatshirt, and gray sandals, police said in a community alert.
Police have not suggested a motive for the attack but are reviewing security footage.
In May 2016, also along Lower Wacker Drive, Kromelis was beaten by an attacker wielding a baseball bat. He spent several weeks hospitalized and he rallied back.
Back in 2016, Janice Riggs started a GoFundMe account for Kromelis. Reached on Wednesday, Riggs was appalled.
“I’m crushed. I think this is a horrible thing to attack someone who is nothing more than a friend to everyone around Chicago,” Riggs said. “He’s is a totally harmless individual. To single him out for this kind of abuse is shocking and inhuman.”
Strangers, who for decades recognized him by his distinctive long, wavy hair, mustache, and sport coat as he wandered downtown streets, were so moved by his plight in 2016 that they donated more than $33,000 to the GoFundMe account. Well-wishers spent another $5,500 on charity T-shirts bearing the slogan “Walk on, Dude.”
Kromelis has been a fixture in downtown street life, often seen browsing inside stores and walking the streets of the Magnificent Mile and Streeterville. He has been featured in news stories and videos, including a YouTube feature titled “Dudementary.” A few years ago, someone created a Facebook page where people post sightings.
Kromelis once joked: “I’m like the Kardashians — I’m famous for doing nothing.”
Riggs saw him most recently in Millennium Park near the skating rink about three months ago.
She decided against striking up a conversation because she didn’t want to jolt him out of his routine. But he seemed happy and healthy.
When she would stop and briefly chat with him after the attack, he never really “made the connection” that she was the person who had instigated the GoFundMe, which was later taken over by Kromelis’ relatives.
He’s always been tough and obviously in very good shape but after the beating, there were “long lapses” where she would not see him, and then, the pandemic.
He “didn’t engage” as much as he used to, and moved much slower, Riggs said. “He was more isolated with himself.”
“He used to be the fastest man in Chicago. I would see him in Palos Heights and then a half a day later see him in Edgewater or near Wrigley Field,” Riggs said.
“He was everywhere.”
When people on the street talk to him and ask how he is doing, he would respond but was never very forthcoming.
“It wasn’t like he was isolated on the street. He was always very polite and was very reticent about discussing himself. He would talk about anything in the world but not himself.”
No arrests had been made as of Wednesday afternoon and no description of the attacker had been released by police.

Joseph Kromelis, known as “The Walking Man, " was released from the hospital after he was set on fire while sleeping on Lower Wabash Avenue.
Doctors initially said the 75-year-old was not expected to recover after he was lit on fire for nearly three minutes the night of May 25. His upper body was engulfed in flames, and he suffered third-degree burns on over 65% of his body.
As of Friday, September 23, 2022, Kromelis had been discharged from Stroger Hospital, but will continue to recover at a rehab facility and will have to undergo additional surgeries.
“He is grateful for everyone’s concern and asks that his privacy be respected,” according to a statement from Cook County Health.
Kromelis, a homeless man, known for walking the streets of the Loop, was sleeping under blankets in the 400 block of North Lower Wabash Avenue when surveillance cameras captured Joseph Guardia, 27, walking up and standing over him silently for 16 seconds, prosecutors said in a court hearing in May.
The video allegedly shows Guardia walking to a nearby intersection then returning and pouring gasoline over Kromelis’ uncovered head and igniting it.
Guardia provided no other motive than “being an angry person, and claimed he wanted to burn trash but did not realize there was a person there.”
Six years ago, on May 24, 2016, Kromelis was brutally beaten by someone with a baseball bat in the 400 block of East Lower Wacker Drive. The two were struggling over the bat when police arrived.