NOTE: I present articles without regard to race, color, political party, religion, national origin, citizenship status, gender, age, disability, or military status. What I present are FACTS — NOT ALTERNATIVE FACTS — about the subject. What you won't find are rumors, lies, unfounded claims, character assassinations, hateful statements, insults, or attempts at being funny.

W A R N I N G — Please be an adult. If you don't like an article, scroll down to the next one. Because this article is about a modern-day POLITICIAN, you MUST respect the group's rules if you wish to ever see the group again!
The Obama family celebrates Hanukkah at the White House. Barack issued a Hanukkah greeting ahead of the start of the Jewish holiday in 2016, saying "the meaning of this holiday has inspired an American tradition of religious freedom." 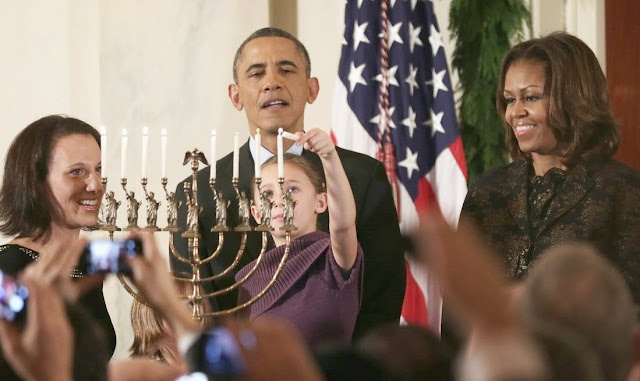 Hanukkah, also known as the Festival of Lights, lasts eight days and commemorates the rededication of the Holy Temple in 165 BC by the Maccabees after its desecration by the Syrians. It is marked by the successive kindling of eight lights on the menorah.

The Obama's hosted more than 1,000 people during two Hanukkah receptions (afternoon and evening) in the East Room of the White House, issued a statement addressing how the values of the holiday apply to everyone, regardless of their faith:


"For more than two millennia, the story of Hanukkah has reminded the world of the Jewish people’s perseverance and the persistence of faith, even against daunting odds. For more than two centuries, the meaning of this holiday has inspired an American tradition of religious freedom — one codified in the Bill of Rights and chronicled in the enduring promise President George Washington made in his letter to the Jews of Newport, Rhode Island: that the United States "gives to bigotry no sanction, to persecution no assistance.

May the flicker of each flame in every Menorah remind us all of the profound miracles in our own lives. And may the light of hope we shed continue to drive out darkness and brighten the futures we build for our families, our neighbors, our communities, and our world."

While I received with much satisfaction your address replete with expressions of esteem, I rejoice in the opportunity of assuring you that I shall always retain grateful remembrance of the cordial welcome I experienced on my visit to Newport from all classes of citizens.

The reflection on the days of difficulty and danger which are past is rendered the more sweet from a consciousness that they are succeeded by days of uncommon prosperity and security.

If we have [the] wisdom to make the best use of the advantages with which we are now favored, we cannot fail, under the just administration of a good government, to become a great and happy people.

The citizens of the United States of America have a right to applaud themselves for having given to mankind examples of an enlarged and liberal policy—a policy worthy of imitation. All possess alike liberty of conscience and immunities of citizenship.

It is now no more that toleration is spoken of as if it were the indulgence of one class of people that another enjoyed the exercise of their inherent natural rights, for, happily, the Government of the United States, which gives to bigotry no sanction, to persecution no assistance, requires only that they who live under its protection should demean themselves as good citizens in giving it on all occasions their effectual support.

It would be inconsistent with the frankness of my character not to avow that I am pleased with your favorable opinion of my administration and fervent wishes for my felicity.

May the children of the stock of Abraham who dwell in this land continue to merit and enjoy the good will of the other inhabitants—while every one shall sit in safety under his own vine and fig tree and there shall be none to make him afraid.

May the father of all mercies scatter light, and not darkness, upon our paths, and make us all in our several vocations useful here, and in His own due time and way everlastingly happy."