The Chronology of the Kinzie House, Chicago.

In the spring of 1782, possibly earlier, Jean Baptiste Pointe de Sable settled at Chicago to farm and trade with the Indians. He built a crude log cabin in  1784 on the west bank of the north branch of the Chicago River (the north branch was then named the Guarie River), just north of where the river turned east to meet the lake. Pointe de Sable farmed and traded with the Indians.
Pointe de Sable built a second trading post/cabin on the north side of the Chicago River, very close to the river's mouth. By the time he sold the second cabin (illustration) in 1800 for 6,000 Livres ($1,200), he had developed the property into a commodious, well-furnished French-style house with numerous outbuildings.
The Wayne County Register of Deeds in Detroit—Chicago was part of that county during Northwest Territory days—debunks many of the Kinzies’ claims. Their records show Jean Lalime, not Joseph Le Mai, bought Ponte de Sable’s trading post in 1800, bankrolled by Lalime and Kinzie’s mutual boss, fur trader William Burnett. There COULD NOT have been confusion because Kinzie signed the deed as a witness.
Successive owners and occupants include: 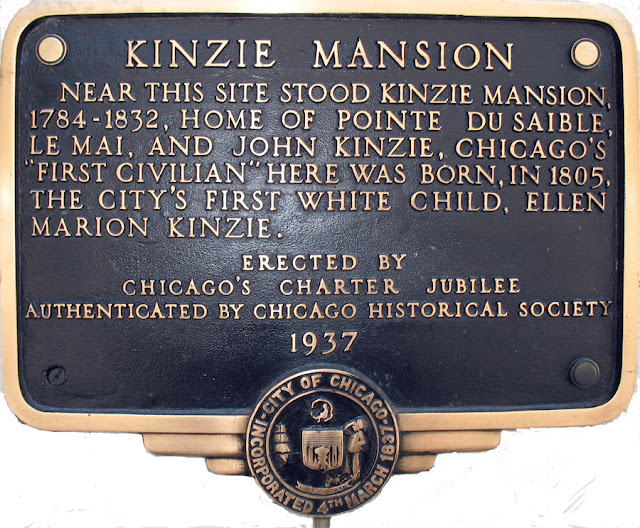 [1] Guarie River: The first non-indigenous settler at Wolf Point may have been a trader named Guarie. Writing in 1880, Gurdon Saltonstall Hubbard, who first arrived in Chicago on October 1, 1818, stated that he had been told of Guarie by Antoine De Champs, the man in charge of the “Illinois Brigade” of the American Fur Company, and Antoine Beson. They had been traversing the Chicago Portage annually since about 1778. Hubbard wrote that De Champs had shown him evidence of a trading house and the remains of a cornfield supposed to have belonged to Guarie. The cornfield was located on the west bank of the North Branch of the Chicago River, a short distance from the forks at what is now Fulton Street; early settlers named the North Branch of the Chicago River the Guarie River, or Gary's River.
“The Autobiography of Gurdon Saltonstall Hubbard" (in pdf), by Gurdon Saltonstall Hubbard, published 1911.
Presented by Dr. Neil Gale, Ph.D. at 11/18/2019 03:42:00 PM