The Oscar Mayer Enterprise was founded in Chicago, Illinois, in 1883.

Oscar Ferdinand Mayer was the founder of the Oscar Mayer meat products company. Mayer was born in Bavaria on March 29, 1859, and emigrated to Detroit, Michigan in 1873 at the age of 14 to work as a butcher's apprentice. 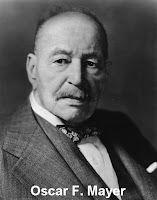 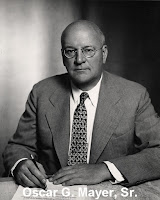 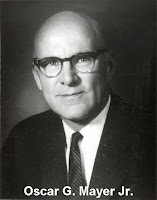 Mayer moved to Chicago in 1876 when he was 17 to work for Kohlhammer's Market and then worked six years for the Philip Armour & Company meatpackers at the Chicago Union Stock Yards. By 1883 his brother Gottfried Mayer had moved to Chicago from Nurnberg, Germany where he had established himself as a "wurstmacher" or sausage-maker and ham curer.

Oscar Mayer had saved enough money to lease a failing business, the Kolling Meat Market at 1241 North Sedgwick Street, in a German neighborhood on the near north side and leased the building from the former owner.

From their first week in operation, the business was very popular due to Gottfried's skill in producing the products that Germans in Chicago loved, reminding them of the quality sausages from back home. Within a year, the shop was turning a profit. Five years later, its continuing success prompted the envious former owner of Kolling's to refuse to renew the Mayers' lease on the building in 1888. Instead, he announced that he would resume control of the firm himself. But without the Mayer brothers, his store failed in a year.

What he had not counted on, however, was Oscar Mayer's determination. Having worked very hard to establish his business, the young entrepreneur was not about to let anyone take it away without a fight. Mayer borrowed $10,000 and purchased a piece of property only two blocks away, close enough to continue serving his faithful clientele. He then built his own building and set up shop again in 1888.
A third Mayer brother, Max, came over from Germany about 1888 to join the company as a bookkeeper when they built a new two-story building two blocks from the first location and lived in apartments over the store.

The company was first called Oscar Mayer and Brother and then Oscar Mayer & Company. In 1893, they were sponsors of the German display at the World's Columbian Exposition in Chicago. They also sponsored German polka bands. The German market in Chicago was important. According to the census of 1900, one in four residents of Chicago, about 470,000 people, were either born in Germany or had at least one parent who was born there. The next largest immigrant group was the Irish and they also liked the Mayer products.

At the start of the twentieth century, Oscar Mayer had a workforce of 43 people including eight wagon drivers who made deliveries to 280 stores all over Chicago and suburbs as well as in Wisconsin. The standard practice for meat sellers in 1904 was to rely on salespeople and remain anonymous as to the packer or retailer. The idea of retail brand names in food and consumer advertising was still fairly new in the early 1900s. As in the case of Charles R. Walgreen who started branding his drug stores 100 years ago, Oscar Mayer put his brand name on retail meat products in 1904.

The Mayers were very concerned with quality control. In 1906 they became one of the first companies to volunteer for participation in a new federal meat inspection program to certify the purity and quality of products. Naturally, the company advertised that they were government-inspected as a distinctive selling point. Just after World War I, Oscar Mayer & Company made its first large expansion with the purchase of a processing plant in Madison, Wisconsin.

In 1909, Oscar's only son, Oscar Gottfried Mayer, graduated from Harvard University and joined the family business. One year at a time, Mayer launched many innovations to set his brand names apart from the competition. By 1912 a Ford Model T motorcar had replaced the horse-drawn wagon on one of the company's 20 sales routes.

By 1917 sales at Oscar Mayer had grown to $11 million. About a third of that total represented government purchases for troops fighting in World War I. That same year the Edelweiss brand name was discontinued and replaced by Oscar Mayer "Approved Meat Products," which the company used in its newspaper display ads.

In 1924 Mayer introduced sliced bacon in a special "see-through" plastic packaging that was patented. In 1928, Oscar F. Mayer became Chairman of the Board and his son Oscar G. Mayer was made president.

In 1929, the company introduced "yellow band weiners." A yellow paper band was a great gimmick because most hot dogs at that time were sold in bulk with no packaging other than a display box. Mayer employees applied individual yellow paper bands, by hand, on every fourth hot dog produced that carried the company name and the U.S. government inspection stamp.

Oscar F. Mayer was interested in politics but was usually too busy running his own business to take too much time for campaigns. He was an Illinois delegate to the Democratic National Conventions of 1920 and 1928.
In addition to his business interests, Oscar Mayer served for many years as treasurer of the Forest Preserve District of Cook County, Illinois, which was responsible for acquiring and maintaining natural wooded areas for recreational uses.

His son Oscar G. Mayer was born in Chicago in 1888 and lived in Evanston. Oscar G. Mayer also was elected as a trustee of the University of Illinois from 1935 to 1941.

In 1936, Oscar F. Mayer came up with another classic advertising gimmick at the suggestion of his nephew. It was a custom-made vehicle that looked like a giant wiener on a truck body with wheels and it was and is today called the Wienermobile. It became a rolling billboard for Oscar Mayer to be driven in parades and around Chicago and suburbs.

In 1969, new Wienermobiles were built on a Chevrolet motor home chassis and featured Ford Thunderbird taillights. It was the first Wienermobile to travel to foreign countries. In 1976 Plastic Products, Inc., built a fiberglass and styrofoam model, again on a Chevrolet motor home chassis.In 1988, Oscar Mayer launched its Hotdogger program, where recent college graduates were hired to drive the Wienermobile through various parts of the nation and abroad. Using a converted Chevrolet van chassis, Stevens Automotive Corporation and noted industrial designer Brooks Stevens built a fleet of six Wienermobiles for the new team of Hotdoggers.

With the 1995 version, the Wienermobile grew in size to 27 feet long and 11 feet high. The 2004 version of the Wienermobile includes a voice-activated GPS navigation device, an audio center with a wireless microphone, a horn that plays the Wiener Jingle in 21 different genres from Cajun to Rap to Bossa Nova, and sports fourth generation Pontiac Firebird taillights. 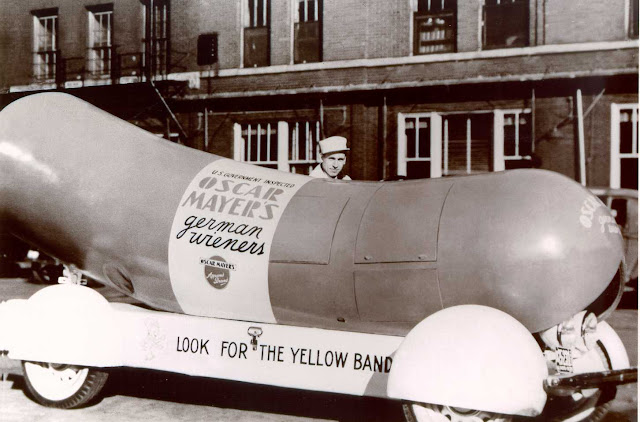 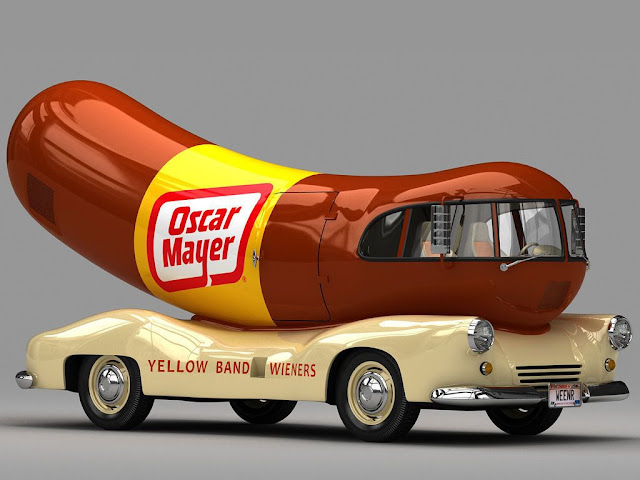 In 1969, new Wienermobiles were built on a Chevrolet motor home chassis and featured Ford Thunderbird taillights. It was the first Wienermobile to travel to foreign countries. In 1976 Plastic Products, Inc., built a fiberglass and styrofoam model, again on a Chevrolet motor home chassis. In 1988, Oscar Mayer launched its Hotdogger program, where recent college graduates were hired to drive the Wienermobile through various parts of the nation and abroad. Using a converted Chevrolet van chassis, Stevens Automotive Corporation and noted industrial designer Brooks Stevens built a fleet of six Wienermobiles for the new team of Hotdoggers. 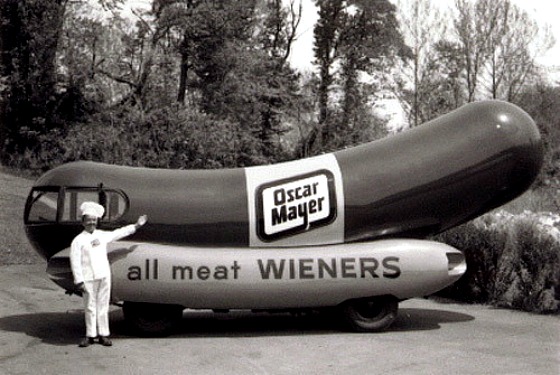 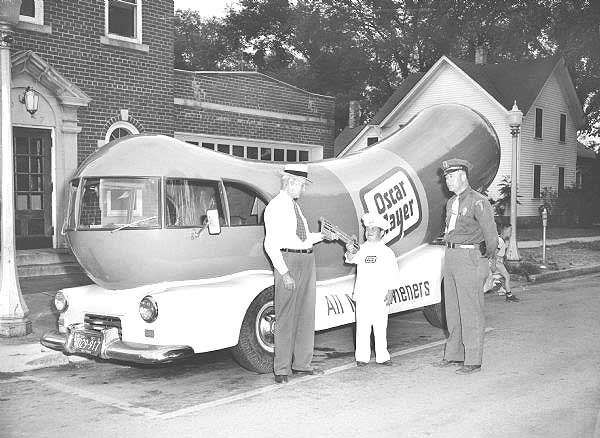 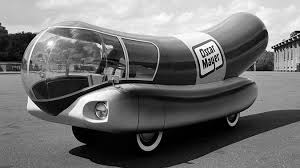 With the 1995 version, the Wienermobile grew in size to 27 feet long and 11 feet high. The 2004 version of the Wienermobile includes a voice-activated GPS navigation device, an audio center with a wireless microphone, a horn that plays the Wiener Jingle in 21 different genres from Cajun to Rap to Bossa Nova, and sports fourth generation Pontiac Firebird taillights.
Due to TV commercials over more than fifty years that featured the vehicle, the Weinermobile is one of the most recognized custom vehicles in the country and an icon of American pop culture. It has been worth millions of dollars in brand name awareness advertising to the company, far in excess of its cost to operate and maintain.

For about 36 years between 1940 and 1976, a little person dressed as a chef by the name of "Little Oscar," was the goodwill ambassador for the company who traveled with the Wienermobile. 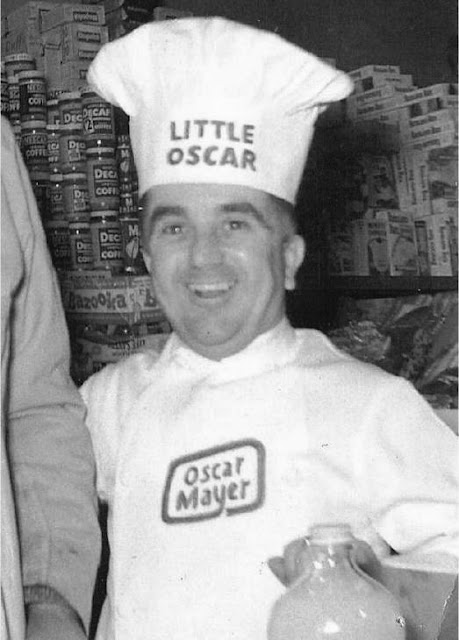 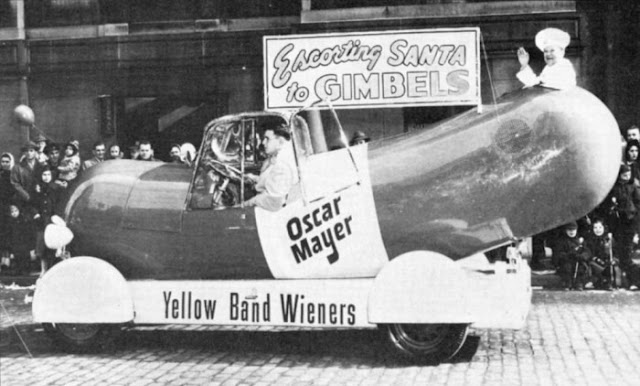 He was played by George Molchan, who had auditioned on the recommendation of one of his friends who played a "Munchkin" in the 1939 film, The Wizard of Oz.
George would pass out plastic "wiener whistles" to kids at each stop the Wienermobile made. In 2005, Mr. Molchan died at age 82 in Merriville, Indiana. 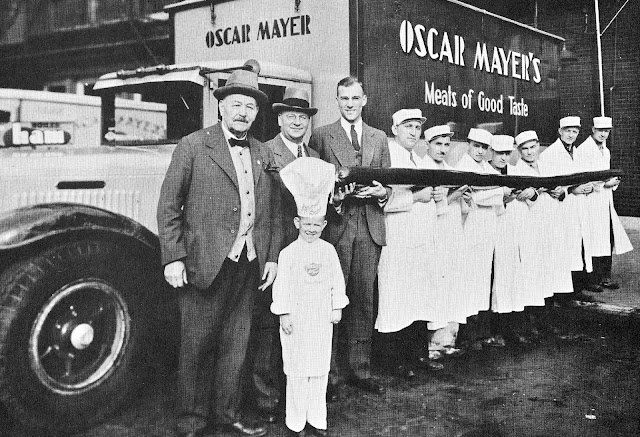 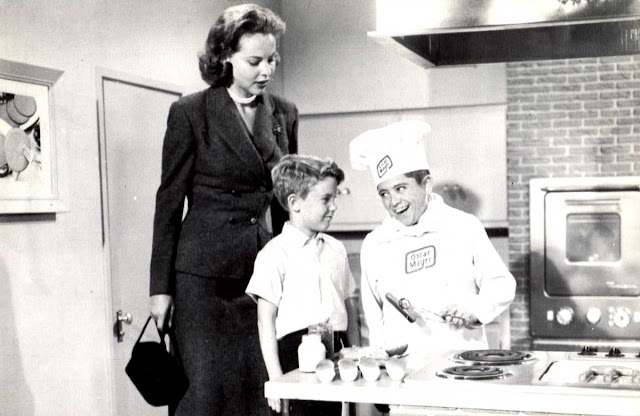 Throughout the rest of the 1940s and into the early 1950s, the company launched a series of technological improvements in the areas of packaging and distribution. The first of these debuted in 1944. Known as the Kartridg-Pak, it automatically banded hot dogs together in bunches. Five years later a tube machine was invented that encased liverwurst in "chub-sized" plastic tubes. The year 1950 marked the development of the Slice-Pak, which vacuum-packed sliced meat in plastic packages. A stripping machine created in 1953 removed the cooking cases from sausages and made possible the sale of skinless links. Oscar Mayer leased the rights to all of these innovations to competing meatpackers, which is one reason the company has consistently been among the most profitable firms in the meat-packing industry.

Oscar F. Mayer died on March 11, 1955, just a few weeks before his 96th birthday. He is buried at Rosehill Cemetery in Chicago.

After his death, his son and grandson remained active with the company and the corporate headquarters moved from Chicago to Madison, Wisconsin to be closer to the main plants.

Under both Oscar Gottfried Mayer, and his son, Oscar Gustave Mayer, Jr., the company continued to innovate with special vacuum sealed packaging in the 1950s and other ways to guarantee freshness. In 1971, the Oscar Mayer packaged meats were the first to print "use by" dates on products.

Starting in 1963, Oscar Mayer & Company used a jingle that many generations of children have memorized. "I wish I were an Oscar Mayer Wiener" is the longest continuously used commercial jingle in the history of American advertising.

Another famous jingle taught children how to spell "baloney" as "balogna" with a first name of O-S-C-A-R and a last name of M-A-Y-E-R.

In 1981 Oscar Mayer was bought by General Foods Corporation, a company founded in the 1920s by Marjorie Merriweather Post of Springfield, Illinois, and its name was changed to Oscar Mayer Foods Corporation. As an increasingly health-conscious public began to shun fatty meat products containing preservatives, the company countered by introducing a variety of low-fat and low-sodium products. Thus, a large share of the meat that finds its way into America's lunch-boxes still carries the name of Oscar Mayer.

In 1989, Mayer was again merged with the company founded by Chicagoan James L. Kraft, Kraft Foods.

Oscar Mayer’s popular hot dogs were reformulated in May of 2017 by removing all artificial preservatives, nitrates, and nitrites. Kraft-Heinz has proclaimed it is the first national hot dog maker to make the switch.