The Bloody Autumn at Nauvoo (Mormon Town), Illinois in 1845.


Joseph Smith, who founded the Mormon Church in 1830, lived with his followers in Missouri, where they had various conflicts with locals, including an armed skirmish with the state militia. In 1838, Governor Lilburn Boggs signed a military order directing that the Mormons be expelled or exterminated: "The Mormons must be treated as enemies and must be driven from the state or exterminated, if necessary, for the public good." 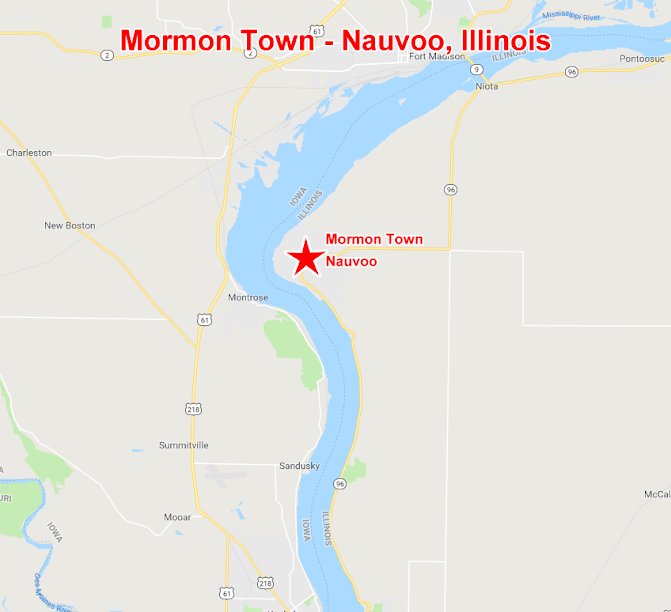 Smith and the Mormons fled across the Mississippi to Nauvoo, Illinois (aka Mormon Town), quickly becoming the second most populous town in the 1840s. The population was such that Nauvoo rivaled Chicago for the "biggest city in Illinois." One statistical comparison is that in the fall of 1845, Nauvoo's violent crime rate likely surpassed Chicago's.
In 1845, crime in Chicago was such that the city had only four men responsible for keeping the peace: one marshal and three assistants, whereas the Nauvoo police force, in January of 1845, numbered 500 men. While there were extenuating circumstances in Nauvoo necessitating a high number of peacekeepers, in the fall of 1845, Nauvoo's policemen were often the source of violent crime.

There were conflicts and tensions in Nauvoo as well. When a local newspaper printed editorials claiming that the religious leader was a fraud, Smith sent a group of followers to destroy the newspaper office. He was then arrested and sent to jail, where a lynch mob tracked him down and killed him.
Brigham Young quickly took command of the church and its followers and tried to stifle dissent and banish his rivals. The killing of Phineas Wilcox was part of his consolidation of power.

In his book, One Nation Under Gods, Richard Abanes details some of these events from September 1845. He writes:


“A halt to the violent conflict between Mormons and anti-Mormons lasted but a brief period of time after Smith was killed. Armed mobs of Illinoisans, incited by endless newspaper articles covering Mormon issues, soon began to conduct raids against isolated church settlements. Mormons were threatened, Latter-day Saints' homes were burned, rumors about various Mormon atrocities circulated, and militias were called out by the governor. Church dissenters and critics, meanwhile, continued to expose aspects of Mormonism that church leaders did not want revealed. The Saints retaliated with verbal intimidation, religious condemnation, and acts of physical violence… More disturbing were the many murders, vicious beatings, and intimidating assaults perpetrated by the Nauvoo police against perceived enemies of the church. Policeman Alan J. Stout summed up the rational of the Saints on these matters, explaining that to his mind such activity was nothing more than avenging the blood of Joseph and Hyrum. In reference to the Mormon dissenters remaining in Nauvoo, Stout expressed a common sentiment: ‘I feel like cutting their throats.’”

Here are just a few accounts of those violent crimes from September of 1845:

On September 14, the Nauvoo police had three men flogged because they were not in good fellowship with the church.

On September 16, Phineas Wilcox was stabbed to death by fellow Mormons in Nauvoo because he was believed to be a Christian spy. Wilcox was last seen as he was led toward the Masonic Hall by three Mormons. Wilcox's stepfather, Orrin Rhodes, inquired after him and searched for him for a week, concluding, "Wilcox has been murdered by… Mormons."
Frank Worrell, a Carthage Jail guard who failed to protect Joseph Smith, was murdered on September 16 and shot out of his saddle by Porter Rockwell.

Andrew Daubenheyer disappeared on the road to Carthage on September 18. He was later found buried in a shallow grave near a campsite on the Carthage road "with a musket ball through the back of his head." In due time Daubenheyer was given a proper burial with a headstone that reads, "Killed by the Mormons."
Later in September, "several Saints captured a young man called McBracking," who was accused of burning Mormon homes. McBracking's friends found his body the next day and reported, "After shooting him in two or three places, they cut his throat from ear to ear, stabbed him through the heart, cut off one ear & horribly mutilated other parts of his body."

Nauvoo's bloody autumn of 1845 could have been much worse, but as it was, it clearly demonstrated that the Mormons and non-Mormons of Hancock County would never learn to live together in peace. "Therefore," wrote Brigham Young, "we propose to leave this county next spring, for some point so remote, that there will not need to be a difficulty with the people and ourselves…."

Tensions with other communities continued to escalate, and a year later, over 2,000 armed anti-Mormons marched on Nauvoo. Young decided it was no longer wise to stay in the area, leading his flock west in 1846.
Completing a treacherous thousand-mile exodus, an ill and exhausted Brigham Young and fellow members of the Church of Jesus Christ of Latter-Day Saints arrived in Utah's Great Salt Lake Valley on July 24, 1847.
Compiled by Dr. Neil Gale, Ph.D.
Presented by Dr. Neil Gale, Ph.D. at 9/15/2018 06:25:00 PM