The land just west of the Guarie River [1] and north of Wolf Point was once Wabonsia, Illinois, a separate town from the expanding town of Chicago to the south.
Appearing on this 1835 plat map of the town of Chicago, Kinzie’s Addition, “Wabobsia,” a sliver of roads and river was its own separate town. Owned by James Kinzie (Virginia-raised second son of John Kinzie and Margaret McKinzie Kinzie, his first wife). Wabonsia became part of Chicago sometime between the incorporation of the Town of Chicago on August 12, 1833, and the incorporation of the City of Chicago on March 4, 1837. Kinzie Street is named after John Kinzie.
Handwritten notes on the map of Wabonsia
June 17, 1835  }
State of Illinois }
Cook County    }

This day before me came James Kinzie personally known and acknowledged himself to be the proprietor of the Town of Wabonsia in Cook County, Illinois as corrected by a special act of the legislature of the State of Illinois in the year 1835 and personally knows to me as such proprietor. Given under my hand and seal this 28th day of August A.D. 1835. Isaac Harmon J.C. {seal}
Recorded September 18th, 1835
Richard J. Hamilton, Recorder of Deeds.

As corrected by special act of the legislature in 1835 and being accepted and adopted by the trustees of the Town of Chicago. August 26, 1835.
Recorder of Cook County
State of Illinois }
Cook County    }

I, William L. Church, Clerk of the Circuit Court, and Ex-officio Recorder in and for said County, in the State aforesaid, do hereby certify, that the annexed is a true and correct copy of a certain Map filed in my Office, on the Eighteenth day of September, A.D. 1835. and Recorded in Book № 'H' of Maps on page 62 the party to the same being James Kinzie.

In Testimony Whereof, I have hereunto set my hand and affixed the seal of our said Court, at Chicago, this tenth day of July, A.D. 1860. 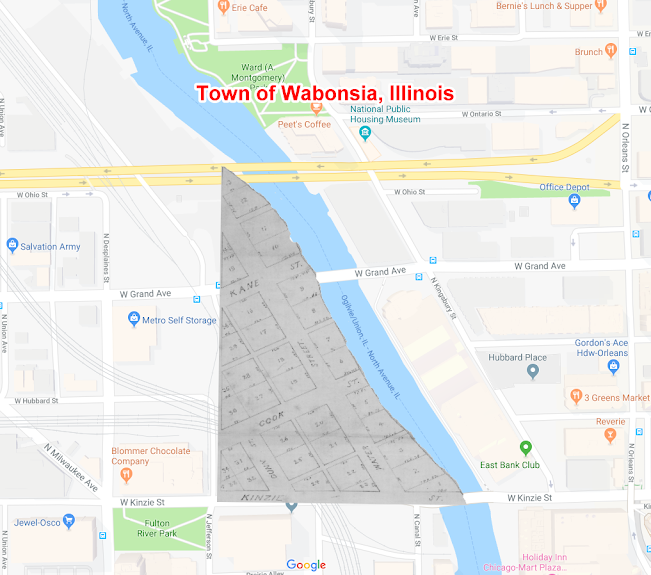 Wabonsia was bounded by Jefferson Street to the west and Kinzie Street to the south. The river's north branch did and still does cut northwest, making the third side of this triangular-shaped town. Wabonsia was on a grid, like Chicago, but its grid cut northeast, askew from the town to the south and parallel with the river’s branch.

"Early in February 1833, my husband [John H. Kinzie] and Lieutenant Hunter, in company with one or two others, [James Kinzie; Virginia-raised second son of John Kinzie and Margaret McKinzie Kinzie, his first wife, was one of the 'others'] set off on a journey to Chicago. That place had become so much of a town [about fifty inhabitants] that it was necessary for the proprietors of "Kinzie's Addition" to lay out lots and open streets through their property."

The plat was corrected (unknown changes) on June 17, 1835, by surveyor J. Wooley then approved on August 26, 1835, by the State of Illinois, Cook County Recorder of Deeds. This was the beginning of the Town of Wabonsia.

Wolf Point Tavern, Chicago’s first tavern, was owned by James Kinzie, and Wolf Point was just south of Wabonsia. A few old sketches of the tavern do show a wooden bridge to the north.
James Kinzie set aside this town to make it easier to sell the land to Chicago, not because he envisioned a community there.

[1] Guarie River - The first non-indigenous settler at Wolf Point may have been a trader named Guarie. Writing in 1880 Gurdon Hubbard, who first arrived in Chicago on October 1, 1818, stated that he had been told of Guarie by Antoine De Champs and Antoine Beson, who had been traversing the Chicago Portage annually since about 1778. Hubbard wrote that De Champs had shown him evidence of a trading house and the remains of a cornfield supposed to have belonged to Guarie. The cornfield was located on the west bank of the North Branch of the Chicago River, a short distance from the forks at what is now Fulton Street; early settlers named the North Branch of the Chicago River the Guarie River, or Gary's River.
Presented by Dr. Neil Gale, Ph.D. at 10:36 PM